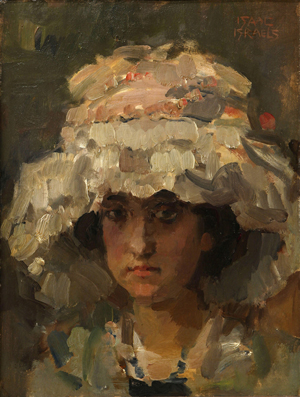 The highlight of the fine art category and second highest lot of the sale was this European work, ‘Portrait of the Young Woman.’ This oil on board by Isaac Israels (Dutch, 1864-1934) soared past its estimate of $30,000-$50,000 to a monumental price of $95,200. Clars Auction Gallery image

The top lot of the sale that drew strong international attention and had multiple phone, floor and online bidders, was a Chinese gilt bronze triple-fusee eight-bell musical automaton bracket clock. The clock featured an enamel dial with Roman markers fronting the engraved quarter-strike movement and the automaton, which played hourly and depicted the eight immortals rotating around the crown. The lower section, showing foreign contributors to the court, was further decorated with waterfalls, rivers and moving ducks, all depicted in motion, with a rear glass window revealing the detailed movement with fine engraved embellishments, and the whole rising on cabriole legs, 34.5 inches high. Prior to the sale, the clock was estimated to achieve $25,000-$30,000 but aggressive bidding drove the final sale price to an astounding $130,900. Regarding the final sale escalating to over four times its high estimate, Deric Torres, vice president and director of furniture and decorative arts, commented that “the clock’s advanced movement and scarcity definitely contributed to the aggressive global competition for this piece.”

Close to doubling its estimate was a monumental and important Hawaiian koa wood poi bowl (calabash), 18th century, which sold to an advanced local collector for $23,800. This bowl was the largest to surface at public auction on record, measuring 14.5 inches high by 17.5 inches wide. Selling for the high estimate to an East Coast collector was a pair of French Louis XV-style marble and ormolu mounted urns, 19th century, attributed to Maison Millet, Paris.

Modern furniture continued to bring strong prices, with the highlight being a Philip and Kelvin Laverne patinated bronze low table, having a rectangular scenic top depicting stylized Modernist figures. This form, which has only surfaced on three occasions at auction, realized $13,100. Furthering the modern offerings was a selection of Warren Platner furniture, including a dining suite and a pair of ‘1725’ easy chairs with ottoman. This group sold well for $16,400.

The highlight of the fine art category and second highest lot of the sale was the European work Portrait of the Young Woman. This oil on board by Isaac Israels (Dutch, 1864-1934) soared past its estimate of $30,000-$50,000 to achieve a monumental price of $95,200. With Israels leading the way, Dutch paintings fared well in general with Church Interior (1673), by Daniel de Blieck (1620-1673) fetching $22,610 and a delicate still life by Simon Pietersz Verelst (1644-1721) realizing $13,100. As Rick Unruh, vice president and director of fine art at Clars remarked, “The extraordinary provenance of both the Israels and the De Blieck being associated with renowned art dealer Jacques Goudstikker made these two paintings very desirable to our global clients.”

Continuing the surge of European art sales, a large yet mesmerizing oil on canvas titled, Twins by Norwegian artist, Odd Nerdrum (b. 1944), achieved an impressive $71,400, the highest price paid at auction for this artist in the United States. Russian paintings sold solidly. The highlight of that category was a bold and vibrant painting by Nikolai Petrovich Bogdanov-Bel’sky (1868-1945) titled, Path Through the Birches, which fetched a surprising $20,230 thanks to competition from all over the world.

World records are indeed remarkable achievements. Clars broke yet another in the art world on Nov. 16 with a spectacular color etching with aquatint and drypoint by Richard Diebenkorn (American, 1922-1993) titled Red-Yellow-Blue (1986), achieving $47,600. Second to Diebenkorn’s result in the postwar, modern and contemporary prints category was Pepto-Caviar Hollywood (1970), a most unusual screenprint with Pepto-Bismol and caviar in colors by Ed Ruscha (American, b. 1937) which eased the stomachs of global bidders coming in at an impressive $16,660. Finally rounding out the impressive postwar American category was Louise Nevelson’s (American, 1899-1988), Untitled, 1957, painted wood sculpture, that achieved a solid $47,600.

The Asian art and antiques offerings generated over $500,000, fueled in great part by the demand for the Chinese huanghuali furniture. The highest selling piece was a huanghuali rounded corner cabinet, which came to the sale with an estimate of $25,000-$45,000 but sold for $77,400. More than doubling the high estimate, a pair of Chinese huanghuali hardwood armchairs that featured an openwork lattice pattern achieved $65,000. The additional huanghuali furniture offered from the collection of an American diplomat accounted for a total of $400,000. A Chinese jade handling piece carved with prunus, 2 inches wide by about 3 inches high, also performed well selling for $10,300 to an Internet bidder via LiveAuctioneers.com 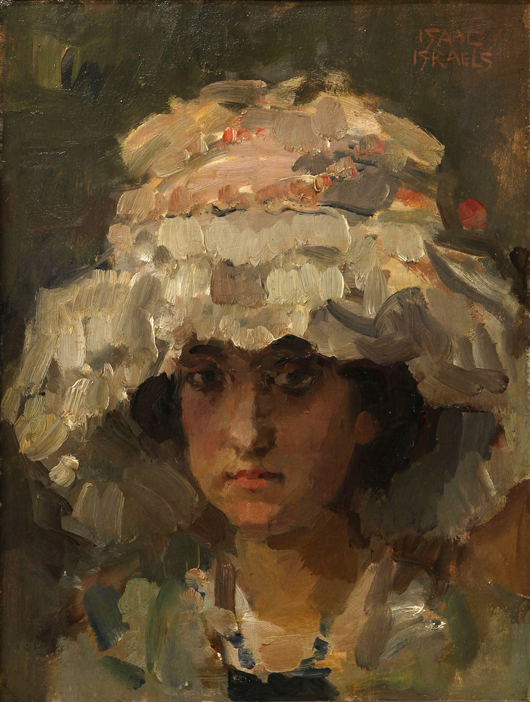 The highlight of the fine art category and second highest lot of the sale was this European work, ‘Portrait of the Young Woman.’ This oil on board by Isaac Israels (Dutch, 1864-1934) soared past its estimate of $30,000-$50,000 to a monumental price of $95,200. Clars Auction Gallery image 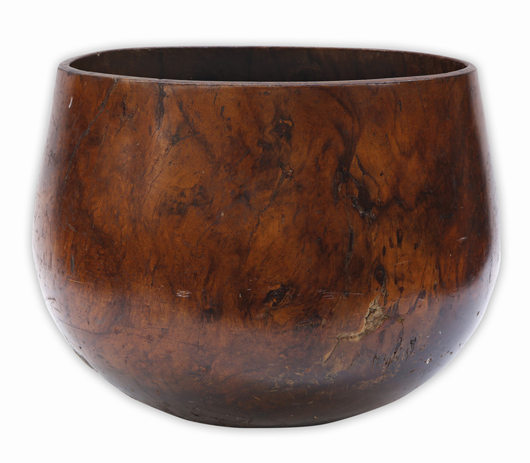 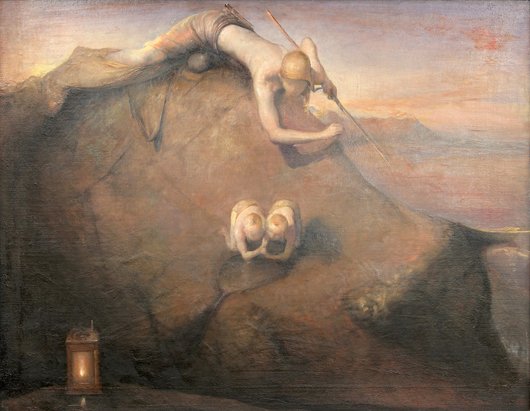 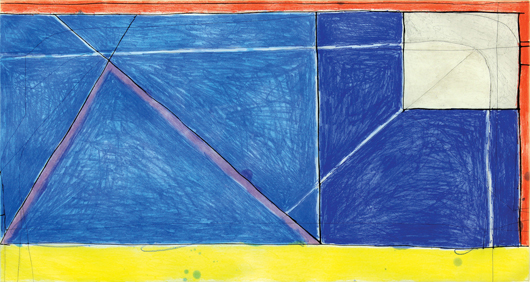 Clars set another record in the art world for Richard Diebenkorn (American, 1922-1993) with his spectacular color etching with aquatint and drypoint, ‘Red-Yellow-Blue (1986),’ which sold for $47,600. Clars Auction Gallery image 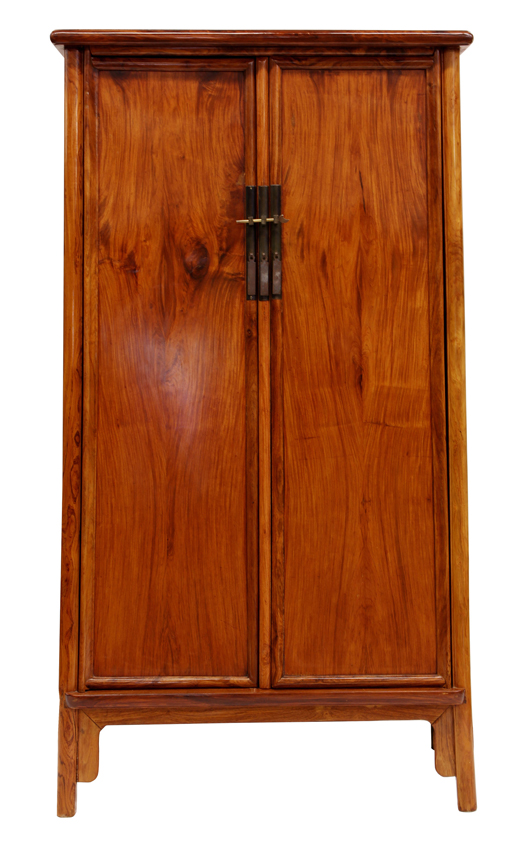 The highest selling piece in the Asian offerings was this huanghuali rounded corner cabinet that came to the sale with an estimate of $25,000-$45,000 but sold for $77,400.Clars Auction Gallery image 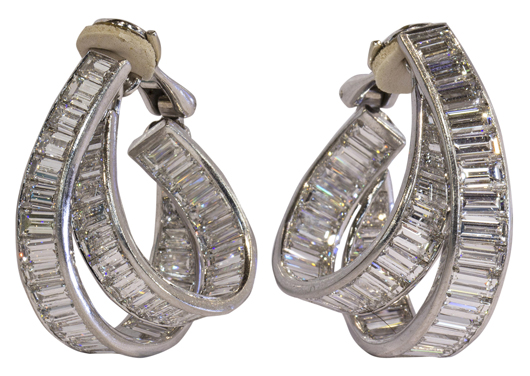 Miscellaneana: Tea caddies and other boxes
Scroll to top