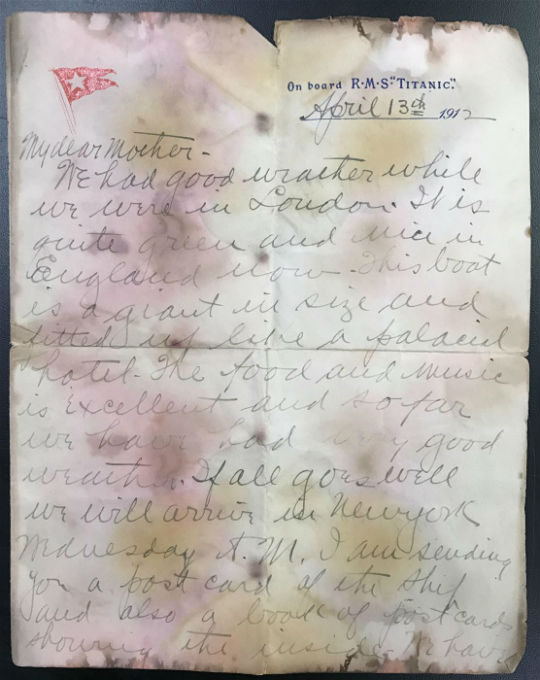 Handwritten letter, penned on actual RMS Titanic stationery and written aboard the ship by a member of the Holverson family, en route to New York. Price realized: $22,600. Weiss Auctions image

LYNBROOK, N.Y. – Ocean liner memorabilia took top lot honors at Weiss Auctions’ June 22 sale, as a letter handwritten aboard the ill-fated RMS Titanic on April 13, 1912 sold for $22,600, an original life ring from the SS Andrea Doria brought $8,050 and a glass clock presented to first-class passengers on the maiden voyage of the SS Normandie in 1935 made $4,560. Absentee and Internet bidding was available through LiveAuctioneers.

Those three items were top achievers in an auction that was packed with hundreds of lots of antique advertising, rare books, historical memorabilia and autographs. Along with the ocean liner items was the lifetime coffee advertising collection of Lowell and Barbara Schindler, featuring not just coffee items but also syrup dispensers, talcum tins, signs and other rare pieces.

“It was a great auction across all categories, with Internet and floor bidding very strong,” said Philip Weiss of Weiss Auctions, adding the final gross was around $220,000.

The 2½-page letter (above) penned aboard the Titanic was on Titanic stationery, with the raised White Star Line and proper watermarks on the paper, which was water-stained in areas. The letter was unsigned, but consigned by descendants of the author, a member of the Holverson family. They were en route to New York at the time. The letter was hand-addressed, “My Dear Mother.”

Oscar Alexander Holverson and Mary Aline Holverson were passengers aboard that fateful maiden voyage. Mrs. Holverson, 35, was rescued in lifeboat #8, but Oscar, 42, perished in the disaster. It’s assumed, since the unposted letter was written aboard the ship, that the couple’s intent was to mail it, along with some postcards, after arriving in New York.

The SS Andrea Doria, of the Italian Line, was approaching the coast of Nantucket, Mass., on its way to New York City on July 25, 1956 when it collided with the Swedish vessel MS Stockholm, resulting in one of history’s most famous maritime disasters. The original life preserver ring was recovered the following day by Alan Ades, an officer aboard a rescuing Coast Guard cutter. 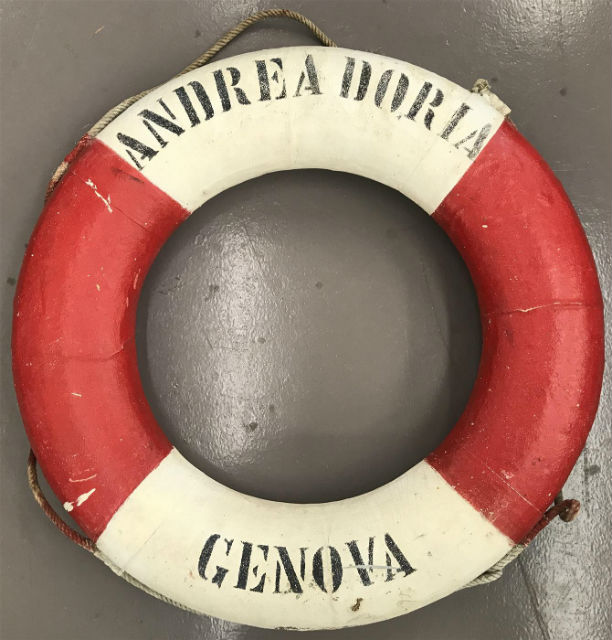 The pale blue, tinted glass clock presented to just a handful of first-class passengers aboard the SS Normandie’s maiden voyage was produced as a collaboration between the renowned French designer Lalique and Leon Hatot of the ATO clock company. The letters NORMANDIE spelled out nine of the clock’s 12 hour markers. The hands were made of tin and showed light wear. 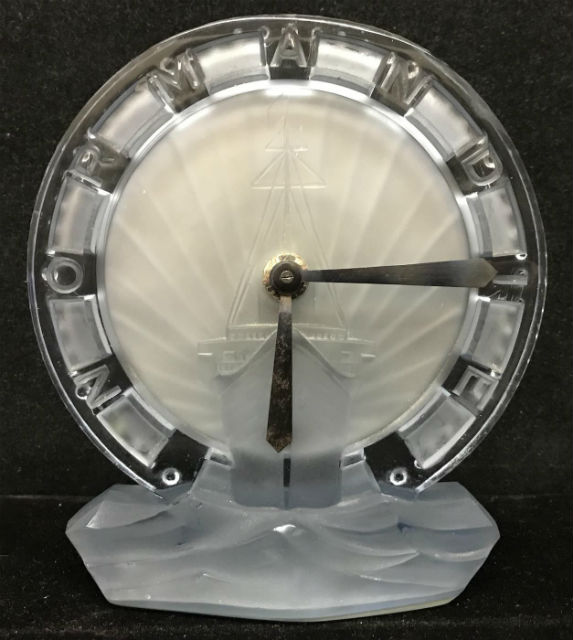 Glass clock given to first-class passengers on the maiden voyage of the luxury French cruise liner the SS Normandie in 1935. Price realized: $4,560. Weiss Auctions image

Following are additional highlights from the auction. All prices quoted include an 18 percent buyer’s premium.

Albert Einstein and Abraham Lincoln both made guest appearances. A six-cent U.S. air mail stamp signed in pen by Einstein and dated (“4.1.39”) flew off for $1,860. The stamp was a Scott Catalogue C23 example. Einstein’s signature was bold and clear. A lock of Abraham Lincoln’s hair finished at $1,680. 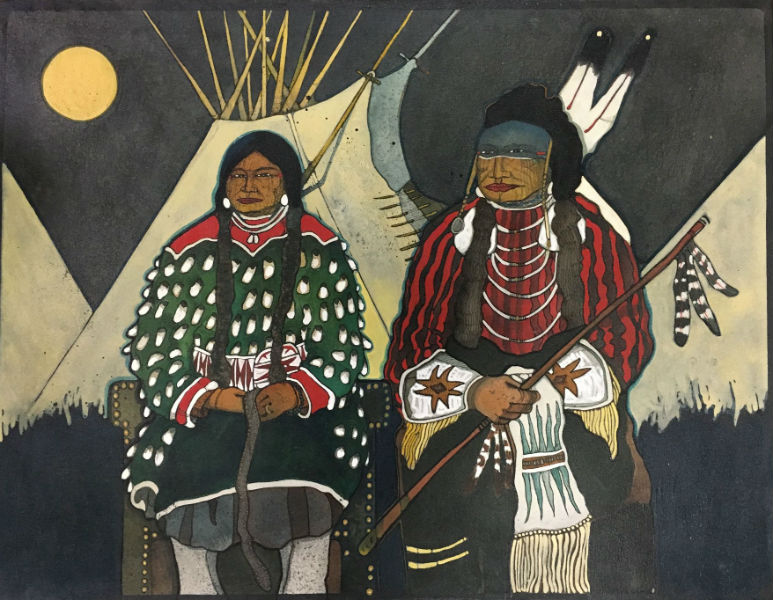 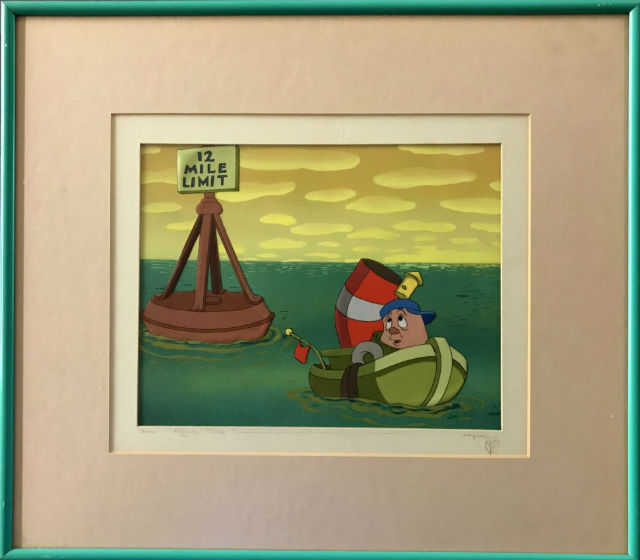 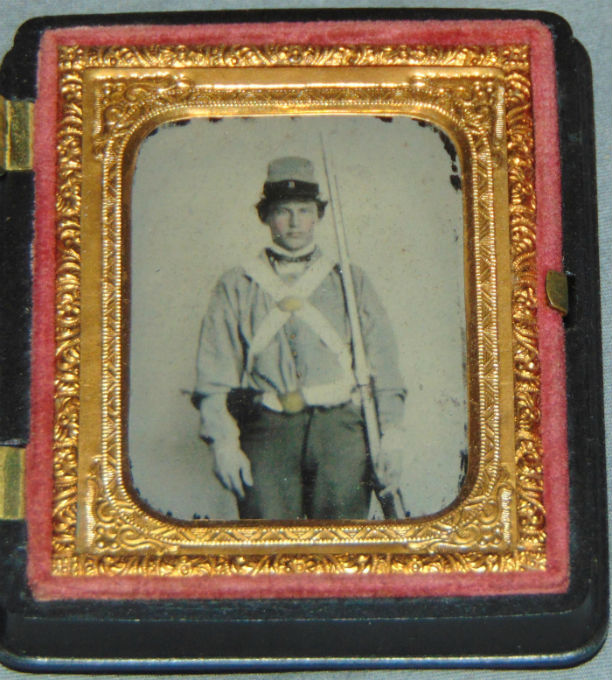 For information on this and upcoming sales by Weiss Auctions call 516-594-0731 or email Phil@WeissAuctions.com.

An ‘original copy’ of Willard’s ‘Spirit of ’76’ painting surfac...
Scroll to top