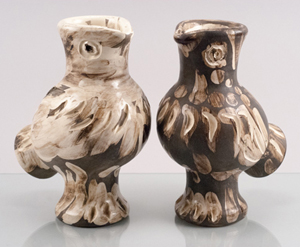 The 477-lot auction, with Internet live bidding through LiveAuctioneers, opens with American and European furniture, with options to suit any décor from rustic to formal. The incomparable designs of architect and woodworker George Nakashima (Japanese/American, 1905-1990) will feature prominently. Two of Nakashima’s Conoid Cushion Chairs of black walnut with hickory spindles and original upholstery will be offered as a pair with an $8,000-$15,000 estimate. A 1976 custom-designed American black walnut blanket chest or clothes hamper is estimated at $12,000-$15,000, while a 1976 Nakashima piano bench is entered with a $6,000-$8,000 estimate – both were custom designs.

With its near-minimalist lines and emphasis on beautiful wood, a Jere Osgood (American, b. 1936-) curly maple queen-size bed is just as sophisticated today as it was in 1973, the year of its production. A studio piece signed by Osgood – a noted teacher of furniture design – the bed is expected to reach $8,000-$12,000 at auction.

Dated 1902, a Charles Rohlfs (American, 1853-1936) black-painted oak stand with stylized foliate piercings carries the maker’s mark “R 1902” inside its door. The 31½in stand has the distinctive look of a Rohlfs Arts & Crafts creation and opens to two shelves with fitted glass holders. Estimate: $3,000-$5,000.

A century before Rohlfs began working in wood, European furniture was the predominant choice in many elegant homes. A quintessential example of Scottish dining room furniture of the early 19th century is the circa-1800 mahogany with fruitwood marquetry sideboard entered with an estimate of $1,500-$2,500. Inlaid with classical forms such as oval paterae, swags, urns, shells and acanthus-leaf scrolls, its presentation is a testament to the skill and artistic eye of its creator.

An early 19th-century Southern pine pie safe is quaintly American in its approach to form and functionality. Its six tin door panels are elaborately punched with decorative hearts, circles and semicircles, which allowed freshly baked pies to vent while cooling inside. The estimate on the pie safe is $500-$1,500.

The best of Art Nouveau will cross the auction block in the form of three Alphonse Mucha (Czechoslovakian, 1860-1939) lithographs, each depicting Sarah Bernhardt as star of a play, including “Medee (Medea),” “Tragique Histoire D’Hamlet/Prince De Danemark,” and “Lorenzaccio.” All three lithographs are linen backed, framed under glass, and measure 82in to 83 inches in length. Each is estimated at $6,000-$8,000.

Decorative-art highlights include a signed 1906 Frederick William Sievers (American, 1872-1966) bronze sculpture titled “Locked on Point.” Measuring 10in high by 26in long by 12in wide, it is the largest of three Sievers bronzes in the sale that depict pointer dogs in action. The work descended from the artist’s personal collection to the consignors and is estimated at $8,000-$12,000.

Interest in Picasso pottery has been at an all-time high since Christie’s 2012 sale in London of the incomparable Ramie collection. To find premier examples of the Spanish master’s pottery designs, US collectors turn to auctions, and they won’t be disappointed on September 21st in Charlottesville. Quinn & Farmer will present two superb, hand-painted figural vessels known as “Chouettes” or “Wood Owls.” Both stand 11¾in tall and carry correct Madoura studio stamps. The predominantly white with brown bird is numbered 18/500, while the owl with a black glaze is numbered 64/500. Each is estimated at $5,000-$8,000.

The September 21, 2013 auction will be held at Quinn & Farmer’s gallery located at 2109 India Road, Charlottesville, VA 22901. Start time: 10 a.m. Eastern. All forms of bidding will be available, including live via the Internet through LiveAuctioneers. View the fully illustrated catalog online at www.LiveAuctioneers.com.

For additional details on any lot in the sale or to organize a phone or absentee bid, call 434-293-2904 or e-mail information@quinnfarmer.com. Visit Quinn & Farmer’s website at www.quinnfarmer.com. 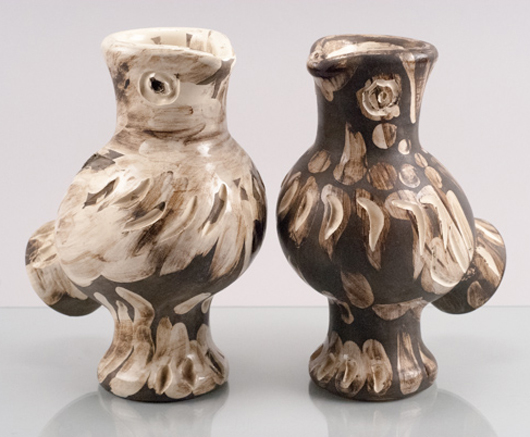 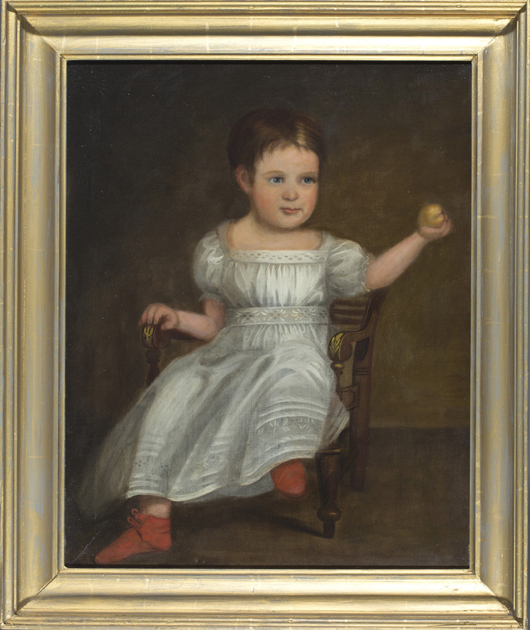 19th-century American folk art painting of young boy seated in a classical chair, holding a piece of fruit. Oil on canvas, 29in by 24in sight. Descent through Virginia family. Est. $2,000-$4,000. Quinn & Farmer image. 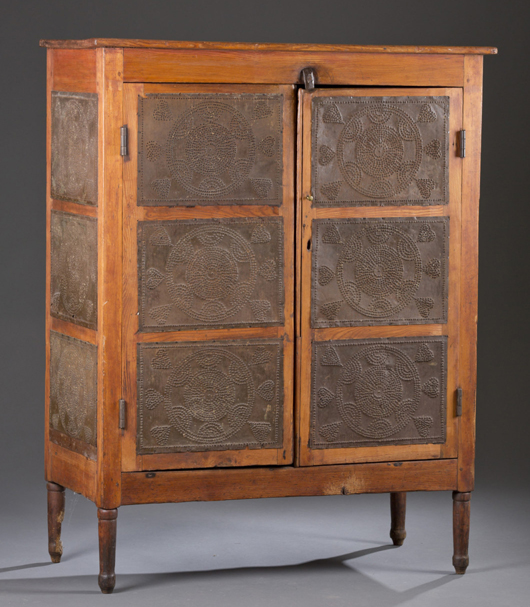 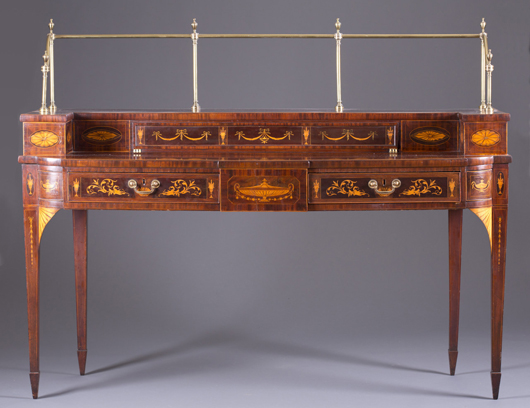 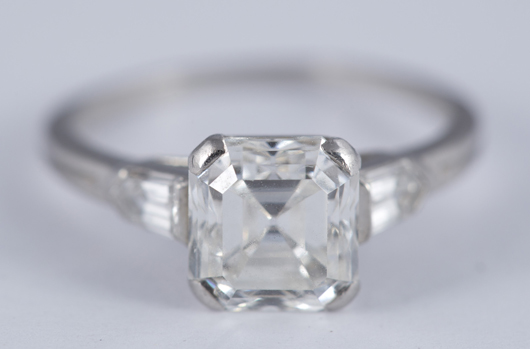 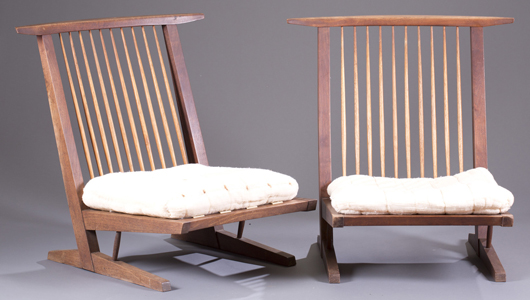 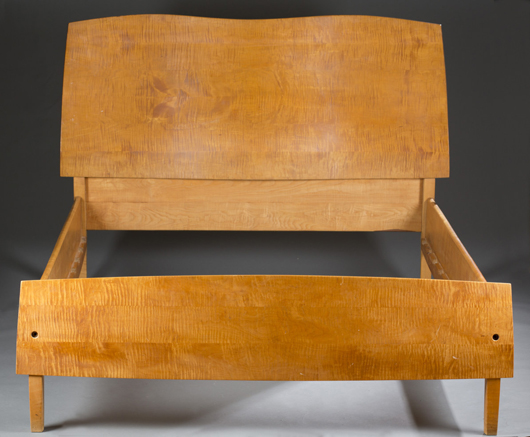 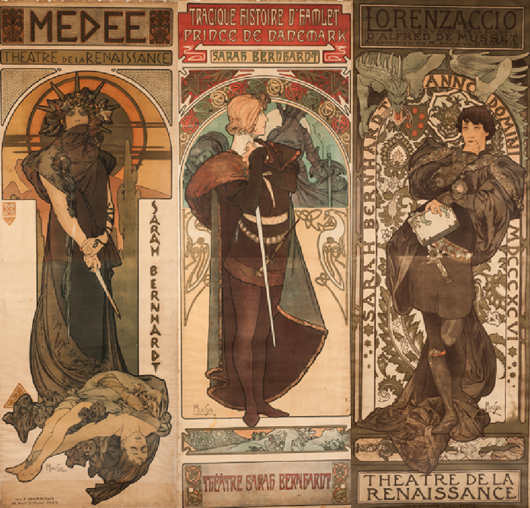 Three Alphonse Mucha (Czechoslovakian, 1860-1939) lithographs, each depicting Sarah Bernhardt as star of a play. Each is framed under glass, measures 82in to 83 inches in length and is estimated at $6,000-$8,000. Quinn & Farmer image.