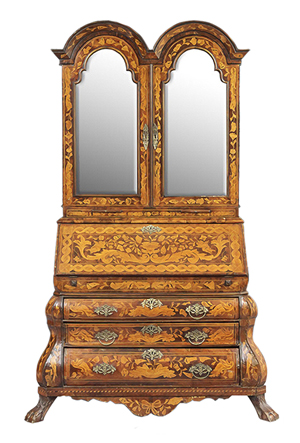 This 19th century Dutch walnut secretary with inlay sold for $2,214 at New Orleans Auction Galleries. It is an example of the bargains that are now seen at auctions because of the drop in prices of what the trade calls ‘brown furniture.’

BEACHWOOD, Ohio – What a bargain! Often an authentic antique sells for less than a modern copy. Since the price of antique wooden (“brown”) furniture has dropped in the last few years, the good news is that there are many bargains for a buyer looking for an older style.

Few Americans grew up with a 19th-century inlaid secretary from Holland in the house. Dutch designs were elaborate, with curved legs, domed cornices, mirrored door fronts, even a slant-front opening covered by a flip top that served as a desk. And of course there were drawers, candle slides and cubbyholes. It is the perfect piece for a period room or as an accent piece in a simple modern room. And the drawers furnish good storage space.

A new reproduction piece like this would have plain, not inlaid, surfaces and probably straighter legs and less trim. A top-quality copy would cost about $5,000. At a 2014 auction, a 7-foot-high secretary desk that could easily be moved into a modern room with the usual 8-foot ceiling sold for $2,214 at New Orleans Auction Galleries. More good news, an antique has a better chance than a copy to go up in value.

Q: I was 3 years old in 1937 when I was flower girl in my aunt’s wedding. I wore a pale blue dress with pink trim and ivory lace at the neck. The tag inside reads “A Nannette Toddler Shirley Temple Brand” along with a picture of Shirley Temple. I still have the dress. What is it worth?

A: Shirley Temple was 5 when she made her film debut. Her 1930s and ’40s retail dresses were designed like her movie costume dresses, in a toddler style even though she wasn’t a toddler. They were made by Nannette Manufacturing Co. of New York City, a division of Rosenau Brothers. The basic design was a skirt with soft pleats and contrasting collar. Fabrics were cotton, organdy and dotted Swiss in prints, plaids, checks and embroidery. There wasn’t much trimming, maybe a small bow, an appliqued figure or narrow lace edging. A 1936 newspaper advertised Shirley Temple dresses for $1.89 each. Dresses for older little girls were made by Cinderella, also a division of Rosenau. Shirley Temple dresses for sale in online shops are priced $30 to $60.

Q: I have a set of Norman Rockwell prints I received as a premium for subscribing to Reader’s Digest in the early 1970s. They depict the four seasons. Each one is signed and numbered 2945. I was wondering if they might be collector’s items.

A: You don’t say what size the prints are, but they’re probably small if they were sent to you as a premium. Norman Rockwell (1894-1978) was a hugely popular U.S. artist and illustrator in the middle decades of the 20th century. Respect for his work has grown again in recent years. Large Rockwell prints that were actually autographed by Rockwell sell for high prices. Your set might sell for $25 or so.

Q: I have a little bronze figure of a man wearing a turban and sitting on a donkey facing backward. He’s holding the donkey’s tail. The donkey is 3 1/2 inches tall and 4 1/2 inches long. I have had this for more than 25 years and nobody knows anything about it. What can you tell me?

A: You have a figure of Nasreddin Hoca (1208-1294), a Turkish philosopher and wise man. “Hoca” is Turkish for “teacher.” Nasreddin is a popular folk figure in many countries, especially in the Muslim world, and humorous stories about him have been translated into several languages. He has been called “a master of the negative way.” When people told him he was riding his donkey backward, he answered “No, it is not that I am sitting on the donkey backwards, it is the donkey that is facing the wrong way!” UNESCO declared 1996 “Nasreddin Hoca year.” Your Nasreddin figure is worth about $25.

Q: I bought a set of Gerber Swiss Bells and it’s still in the original package. There are five plastic bells, each in a different color. It has the original price tag of $1 still attached. When was it made and how much is it worth?

A: Dorothy Gerber (Mrs. Dan Gerber of Gerber Products Co.) wrote about the bells in her popular newspaper column, “Bringing Up Baby,” in 1965. But online sources that offer these musical bells for sale claim they are from the 1950s. A set of the bells in good condition but without the packaging recently sold for $20. Another set, in the original package, sold for $25.

Q: I have a ball-shaped, clear glass jar embossed “National Biscuit Company” in capital letters. I’m told it was in my family’s restaurant in the early 1940s. The jar, with the lid on, is 11 inches tall. It’s a little over 10 inches in diameter at its widest point. Please tell us its approximate age and value.

A: The National Biscuit Co. was founded in East Hanover, N.J., in 1898. We know the company as “Nabisco,” which became its corporate name in 1971. It’s likely your jar dates from the early post-World War II era. There are other versions of National Biscuit Co. glass jars. Yours sells for $65 to $75.

Tip: If you are remodeling or redecorating, think about antiques and collectibles displayed in the work area. A workman will hammer on a wall without worrying about shelves on the other side.

New! Kovels’ Antiques & Collectibles Price Guide, 2015, 47th edition, is your most accurate source for current prices. It’s available now and includes a special bonus section that helps you determine prices if you’re downsizing and selling your collectibles and antiques. If you order directly from the Kovels, you’ll receive our free xompanion eBook with all of the book’s 35,000 prices – ready for downloading to your eReader. “Kovels” is the best book to own if you buy, sell or collect. The large-size paperback has more than 2,500 color photographs 700 categories of antiques and collectibles. You’ll also find hundreds of factory histories and marks, a report on record prices, and helpful sidebars and tips about buying, selling, collecting and preserving your treasures. Available for $27.95 plus $4.95 postage. Purchase directly from the Kovels if you want the eBook Companion. Visit KovelsOnlineStore.com, call 800-303-1996, or write to Price Book, P.O. Box 22900, Beachwood, OH 44122. 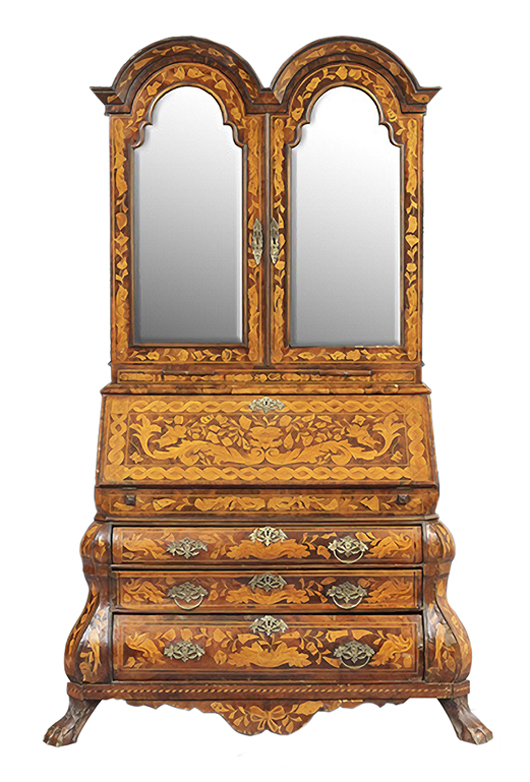 This 19th century Dutch walnut secretary with inlay sold for $2,214 at New Orleans Auction Galleries. It is an example of the bargains that are now seen at auctions because of the drop in prices of what the trade calls ‘brown furniture.’