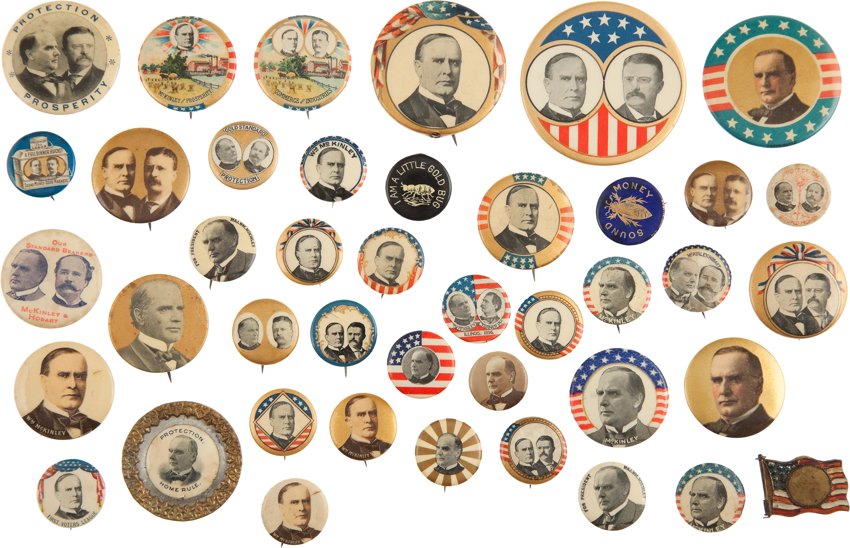 AKRON, Ohio (AP) – Every day is Election Day in Michael Meiring’s world. With bipartisan zeal, he has led a lifelong campaign to find the perfect candidates for his political endeavor.

Meiring, 63, is a national authority and avid collector of campaign buttons. His home in northern Summit County is a star-spangled shrine of political memorabilia, including pins, ribbons, badges, fliers, books, photo¡graphs, posters, toys and other items.

He owns about 25,000 buttons, but has donated, traded or sold thousands more. Meiring’s collections ebb and flow as his interests change. When he completes a subcategory and there’s not much left to find, he moves on to the next project.

“I have a rule that if I don’t acquire something new for a collection at least once every two years, I sell the collection,”’ said Meiring, retired president of JIT Die Cast in Solon and former president of Reminderville Village Council. “And I use the money to buy more stuff.”

A Dayton native, Meiring started his collection as a youth during the 1964 presidential election between Lyndon B. Johnson and Barry Goldwater, and has been gathering buttons ever since.

He said his wife, Meg, shows a “pleasant interest” in buttons, although she is not an avid history buff. They met as students at Case Western Reserve University, where Meiring kept a huge collection of political memorabilia in his dorm room.

Meiring is an active buyer and trader with hobbyists across the nation, and has fielded calls from President Jimmy Carter, U.S. Sen. John Glenn, U.S. Rep. Charles Rangel and other politicians searching for rare memorabilia.

He is a volunteer at Western Reserve Historical Society, where he has donated thousands of political buttons on such topics as Cleveland mayors, Ohio governors and Prohibition. Many of his rare findings are on exhibit at the historical society’s exhibit “Power & Politics,” which runs through February.

“Michael’s encyclopedic knowledge of political ephemera has been a huge help to the Western Reserve Historical Society,” said Eric Rivet, curator of collections and exhibits. “He has helped us to identify pieces that fill holes in our collection, most recently with a Eugene Debs pin. His generosity has also helped to shape our collection over the years.”

Angie Lowrie, director of operations, calls Meiring “an ongoing friend of the institution” who notifies the center when interesting artifacts pop up.

“Through him, we have an extra eye and ear to the ground, and add items to our collection as we go on,” she said. “It’s funny. Mystery boxes just appear from Mr. Meiring. He’ll say ‘I bought two. I bought one for me and one for you.’”

One collection that Meiring can’t bear to part with – at least not yet – pertains to the career of Cleveland businessman and politician Mark Hanna (1837-1904), a U.S. senator, chairman of the National Republican Committee and campaign manager for President William McKinley, the pride of Canton and Niles.

“I’m a Democrat,” Meiring said. “I’m an extremely liberal Democrat. I’m not enamored by Hanna in the slightest. But he was a seminal figure in American politics. He invented modern political campaigns.”

Hanna, whose nicknames included “Lord of the Great Lakes” and “The Kingmaker,” was a “multifaceted tycoon” who “built McKinley’s career from scratch,” Meiring said.

With the fine-cut precision of a jeweler working with precious gems, Meiring pointed out some of the unusual pieces in his collection of Hanna artifacts. One rarity is a metal clasp bearing the kingmaker’s likeness.

“There are only two of them,” he said. “I have one and the historical society has the other.”

Everybody thought the object was a napkin holder until antiques expert Terry Kovel helped Meiring identify it as a hair barrette. Hanna’s daughters Mabel and Ruth wore the only two that were made.

Meiring pointed to a small one featuring the faces of McKinley and 1896 running mate Garret Hobart. When a lever is pushed, a picture of a bicycle-riding Hanna pops up behind them.

“This is a mechanical piece,” he explained.

Those buttons are among the Holy Grails of the collection. He only has a few more to add, including a rare, solid-gold convention badge that was produced before Hanna’s death, plus color variations in silk ribbons.

Collecting political memorabilia can definitely be lucrative. Meiring said he has sold a few individual buttons for tens of thousands of dollars. The hobby helped him start a business, buy a home, pay for medical expenses and put his children Christina and Eric through law school, he said.

In the days before the Internet, Meiring conducted painstaking research at libraries and historical societies to learn more about old campaign buttons. He still has shelves of books that he bought for research.

“It’s easier now on the computer,” he said.

He is a member of American Political Items Collectors and encourages prospective collectors to visit the group’s website at http://apic.us.

Meiring sold most of his presidential collection four years ago because he became interested in something newer. His current obsession is counter-culture memorabilia from the 1960s and 1970s.

Eventually, he plans to bequeath many of his prized pieces – including the Hanna collection – to the Western Reserve Historical Society.

Thanks to his efforts, the Cleveland archives continue to grow. “The Politics & Power exhibit” has been extended through Feb. 20, Presidents Day, a rare Monday opening for the museum.

“We think that we have the largest political button collection in the country,” Lowrie said. “It’s tens of thousands.”
As Meiring said: “It rivals the Smithsonian display – right here in Northeast Ohio.”
___