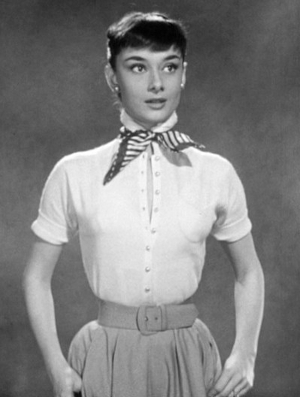 Audrey Hepburn as she appeared in a screen test for the movie ‘Roman Holiday.’ Image courtesy of Wikimedia Commons.

BERLIN (AP) – A rare sheet of 10 stamps depicting Audrey Hepburn fetched $606,000 at a charity auction in Berlin, two-thirds of which will go to help educate children in sub-Saharan Africa.

The mint-condition sheet of 10 stamps featuring Hepburn, a coy smile on her face and a long, black cigarette holder dangling from her lips, brought a profitable outcome to a botched stamp series that should have been destroyed years ago – and evokes Hepburn’s starring role in the 1963 thriller Charade, in which the characters chase a set of rare stamps.

Sean Ferrer, 50, Hepburn’s son with actor and director Mel Ferrer, and the chair of the Audrey Hepburn Children’s Fund, said he was thrilled that the sale Saturday brought “focus on children in need,” but wished the stamps had sold for a higher price.

Two-thirds of money raised will go to the Audrey Hepburn Children’s Fund, and one-third to UNICEF Germany.

The German postal service printed 14 million of the Hepburn stamps in 2001 showing the Belgian-born actress in her most famous role as the ebullient Holly Golightly in Breakfast at Tiffany’s.

Only after the stamps were printed was Sean Ferrer, 50, Hepburn’s son and the chair of the Audrey Hepburn Children’s Fund, contacted to grant copyright – but he refused, arguing that the image had been altered.

“In the original photo, she’s got sunglasses hanging from her mouth, but they had flipped the negative and replaced the glasses with the cigarette holder,” he told The Associated Press.

Ferrer suggested using either the original photo or an alternative, but the postal service ended up scrapping the stamp and ordering those produced destroyed.

Deutsche Post says it saved only two sheets of the stamps – one for its own archive and one for the German Post Museum. But in 2004, a single stamp with Hepburn smoking, postmarked Berlin, landed on auctioneer Andreas Schlegel’s desk.

“I was obviously very surprised, because they never were supposed to be used as stamps at all,” Schlegel said.

After his success selling the fifth stamp, Schlegel contacted Ferrer to suggest asking the German government if they could sell one of the archived stamp sheets for charity. But Ferrer had a better idea: Why not the pristine sheet Germany sent him in 2001, which he still had?

“Andreas almost fell backward and had an apoplectic fit when he heard this,” Ferrer said.

Ferrer then signed a contract with the German Finance Ministry, securing rights to sell the stamp sheet for charity and ensuring the government would not be able to sell either of its sheets until 2040.

That move helped drive up the price of the auction, said Mercer Bristow, director of stamp authentication for the American Philatelic Society.

“It goes back to supply and demand. It’s the only sheet out there people can bid on and she’s still such a popular actress,” he told the AP from Bellefonte, Pa.

Other items being auctioned included a pair of Hepburn’s black ballet slippers and a portrait of the actress.

“I feel wonderful about the fact that something that belonged to her today can bring focus on children in need all over the world,” Ferrer said.

Hepburn was a UNICEF ambassador from 1988 until shortly before her death from colon cancer in 1993.

“My mother always told me, ‘I didn’t make a perfume or go sell toilet paper. I did something good with my name,” Ferrer said.

Audrey Hepburn’s sons lend photos of their mother for exhibition

Rare Audrey Hepburn stamp to be auctioned today, May 26