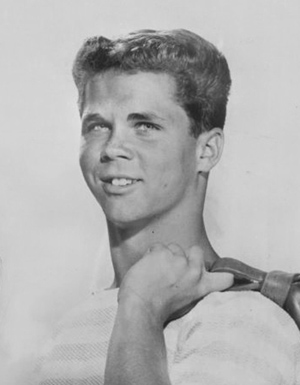 1961 publicity photo of actor Tony Dow promoting his role as Wally Cleaver on the ABC TV series ‘Leave It to Beaver.’ Dow, who lives in Topanga, Calif., is now a respected sculptor.

TOPANGA, Calif. (AP) — He is, and likely forever will be, best known as good old Wally Cleaver, the big brother who had to bail out a goofball sibling facing one dilemma after another on the classic TV series “Leave it to Beaver.”

For the last dozen years, though, Tony Dow has been carving out a new career, as a sculptor with pieces that have shown at numerous venues, including what is arguably the world’s premier art museum — the Louvre in Paris.

This past weekend, more than 30 of Dow’s pieces in bronze, steel and wood went on display closer to home at the DeBilzan Gallery in Laguna Beach, and they could fetch several thousand dollars each from collectors. But despite his respected reputation as a sculptor, Dow acknowledges just as many people at Saturday’s opening reception wanted to rub shoulders with the Beav’s brother as to see his art.

“I think it’s hard, especially with the Wally image, to be taken seriously at pretty much anything other than that,” he says with a chuckle and a shake of his head.

At 67, Dow has a head of gray hair and lives with his wife, Lauren, in the wooded Southern California arts colony of Topanga Canyon.

His reputation as a sculptor reached a new height four years ago when he had one of his bronze pieces accepted at 2008’s Societe Nationale des Beaux-Arts, a 150-year-old art show staged annually at the Louvre.

The modest, soft-spoken Dow is quick to point out that the work — a distinctive abstract piece titled The Warrior — was not placed in the museum’s permanent collection. And if you went to see the show that year you would not have found it anywhere near Leonardo da Vinci’s “Mona Lisa.”

“But it was a show that was represented by 20-some nations, and the U.S. had 14 pieces there, and there were two sculptors, and I was one of them,” Dow says between sips of mango-flavored lemonade as he relaxes on a recent hot, end-of-summer day in the living room of his home.

“So it was a big deal,” he adds softly with a shy smile.

Dow doesn’t complain that he’s still associated with his “Leave it to Beaver” character. He loved playing Wally opposite Jerry Mathers’ Beaver from 1957 to 1963, so much so that he reprised the role as an adult for a TV movie and 104 more episodes of “The New Leave it To Beaver” during much of the 1980s.

Even now, he still keeps in touch with all the old gang.

“Jerry, I talked to him just a couple days ago,” he says of Mathers.

Dressed in a T-shirt, shorts and flip-flops, Dow still looks about as fit as the teenage Wally did. But you probably wouldn’t recognize him as that character otherwise — except for an occasional Wally expression or mannerism.

People who stop him while he walks through his picturesque neighborhood are more likely to ask about his dog Bodie, a dreadlocked Bergamasco Shepherd. It’s in the hills of his neighborhood that Dow finds much of the rough-hewn, bark-covered wood known as burl that he carves into intricately detailed sculptures.

Dow is often described as an abstract artist, but a tour of his adjacent home studio shows numerous pieces reflecting a pop art and modern style as well.

The artist himself says he’s never paid much attention to labels, although he does cite as major influences the great 19th century French sculptor Auguste Rodin and the modern British abstract artist Henry Moore.

“A lot of people say his work is Rodinish, but it’s all Tony,” says pop artist Stephano Sutherlin, who has staged several exhibitions of Dow’s sculptures at his own gallery in Little Rock, Ark.

“He doesn’t copy anybody,” Sutherlin said by phone from the gallery. “He likes certain people, but it’s his own work, and he’s very well respected.”

Dow, who painted as a youngster, began sculpting more than 30 years ago when he was still acting and directing. He planned to get serious about it when he retired from television.

“The dream was to get a barn space somewhere at the beach and have a studio,” he says. But the beach turned out to be too expensive, and he and his wife instead settled in Topanga in the late 1980s.

It was 12 years ago that art took front and center in his life. Dow laughs when he remembers the day when he decided it was time to take the leap from acting to sculpting. He was up for a role in a TV show and a 28-year-old executive asked, “Have you ever done comedy before,” recalls Dow, co-star of one of the most classic TV comedies in history. 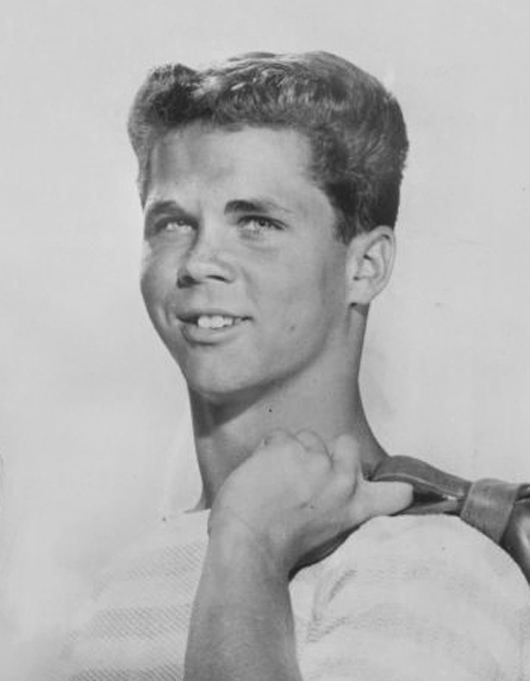 1961 publicity photo of actor Tony Dow promoting his role as Wally Cleaver on the ABC TV series ‘Leave It to Beaver.’ Dow, who lives in Topanga, Calif., is now a respected sculptor.