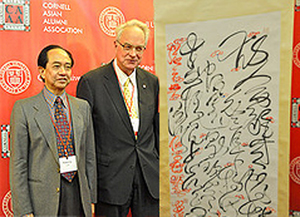 Renowned Chinese artist Kwong Lum with Frank Robinson, recently retired Director of Cornell University’s Herbert F. Johnson Museum of Art. At right is the artwork titled ‘Excerpt from a Poem by Li Bai,’ a gift from the artist to the museum.

NEW YORK – The Chinese artist Kwong Lum, who is best known for ink splash paintings, a technique that adapts the ancient art of calligraphy to abstract paintings, recently endowed Cornell University’s Johnson Museum with a painting titled Excerpt from a Poem by Li Bai.

The painting was accepted during the annual Cornell Asian Alumni Association banquet on Jan. 21. At that time, Frank Robinson, recently retired Director of the Herbert F. Johnson Museum of Art, acknowledged the gift with this statement: “It’s very exciting, and it symbolizes the great, intimate relationship Cornell and the Johnson Museum have with Asia and Asian art.”


The Kwong Lum gift is done in unrestrained freehand cursive script, a later technique that evolved from ink splash. Excerpt from a Poem by Li Bai is the first such work of art in the Johnson Museum’s renowned collection of Asian art.


Kwong Lum describes Unconstrained Freehand Cursive Script as “free from the painstakingness and foreordained results historically practiced by traditional calligraphers.” The finished work is a painting of exceptional fluidity, vibrant and compelling. It features elements of both ancient Eastern and contemporary Western painting.


A recognized prodigy by the age of nine, Kwong Lum evolved ink splash painting in the 1980s. To achieve the freedom needed for spontaneous abstraction, the artist replaced the brush with paint rollers, rice paper with canvas, and pigment with Chinese ink and acrylics. The breakthrough significantly reformed traditional Chinese painting.

Kwong Lum described the style as embodying the essence of Lao Tzu’s principal that all things brought into being are formless yet complete.


Throughout his lifetime, Kwong Lum has consistently drawn the attention of master artists, curators and critics. At the age of nine, he became the student of Ding Yanyong, the painter, connoisseur and educator who was also one of the three founders of the Shanghai College of Art. As Kwong Lum’s proficiency began to mature, Ding Yanyong treated him as a son, teaching him traditional painting, calligraphy and poetry. The master initiated the student in antique appraisal skills and seal engraving, all the while helping him acquire a collection of ancient art treasures.


At the age of 12, Kwong Lum won first prize at the Grand Hong Kong Painting Contest of Young Artists. At 15, he was admitted to New Asia College (now Hong Kong Chinese University). In 1957, he entered the Ontario College of Art in Toronto, thus beginning his life as a Westerner. After graduation, Canadian newspapers reviewed Kwong Lum as “a brilliant rising star in Canada.”


Henry Geldzahler, late Chief Curator of the Metropolitan Museum, spoke highly of Kwong Lum’s work. The art critic Robert C. Morgan has praised it Kwong Lum for his clarity, incisiveness and ability to weave images from the East into the West and to find amazing correlations between the two.


Today, Kwong Lum holds the distinction of being the only living artist to be honored with a museum in his name in China. It is due to open mid-2012. He is also a researcher and consultant to the Beijing National Museum of China and owner of Gianguan Auctions on Madison Avenue in New York City.


Kwong Lum was born in China and has resided in New York City for the past forty years. Throughout that time, Lum has been active in promoting the cultural and economic exchanges between China and the West. He is the subject of a four-part TV docuentary by China Central Television.


Kwong Lum is married to Mary Ann Lum of Toronto. They are the parents of two adult children.


The Kwong Lum Museum is located in Jiangmen, China, the artist’s hometown. It was slated for Beijing but, at the request of the artist, was constructed in his hometown. 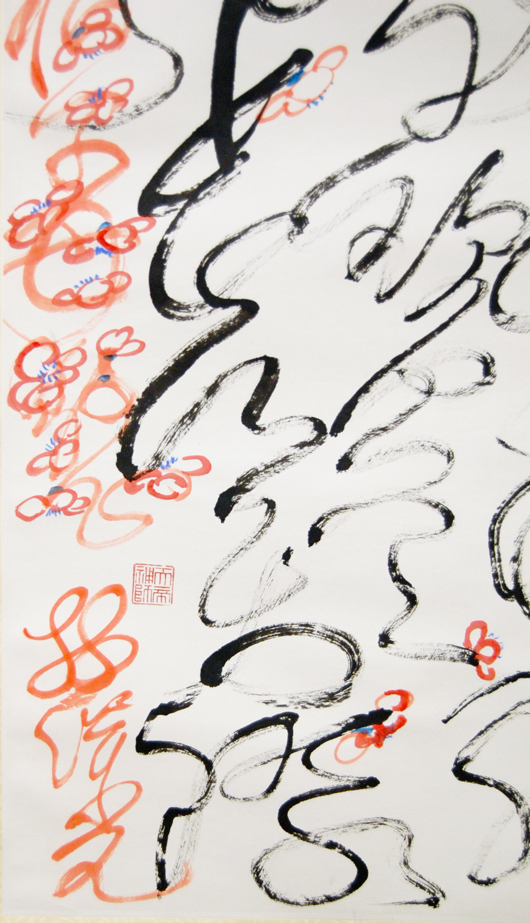 Kwong Lum, ‘Excerpt from a Poem by Li Bai’ 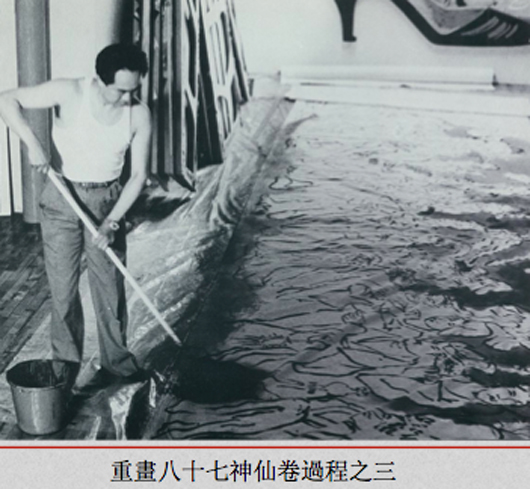 Kwong Lum at work with a canvas and rollers.