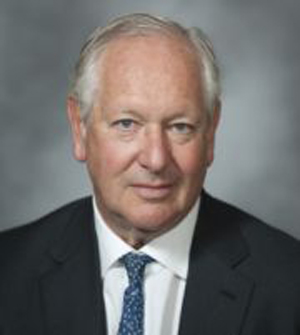 NEW YORK —The Metropolitan Museum of Art announced today the election of business and civic leader Daniel Brodsky, a Trustee of the institution since 2001, as its next Chairman of the Board. Mr. Brodsky will officially assume the chairmanship on September 13, when James R. Houghton retires from the post after 13 years to become a Trustee Emeritus.

“I am both proud and delighted that Dan Brodsky will succeed me as Chairman of our generous and visionary Board,” said Houghton, in making the announcement. “Dan’s broad knowledge of the Museum, his record of accomplishment both at the Met and in leadership roles with other major institutions in our city, and his unique combination of wisdom, experience, and energy make him the perfect choice to assume this vast responsibility. I feel the utmost confidence in turning over the chairmanship to Dan, and know that he will enjoy, as much as I have, the privilege and pleasure of working with the greatest staff at the greatest museum in the world.”

Brodsky commented: “I am deeply honored by this expression of confidence by my fellow Trustees, and I look forward to the challenge with optimism and excitement. To the Board, Museum leadership, staff, and public I pledge my full commitment to supporting the Metropolitan’s unparalleled, unbroken record of accomplishment and service in fulfillment of its historic mission. Above all, I offer my heartfelt thanks and admiration to a truly outstanding Chairman, Jamie Houghton, whose counsel I have treasured and whose record of leadership will serve as a beacon for me and all his future successors.”

Houghton officially informed the Board of his retirement on March 8. The Trustees then named a Board Succession Committee, which went on to study and recommend a new candidate. Its members included: Henry Schacht, Chairman; S. Parker Gilbert and Annette de la Renta, Vice Chairmen; Jeffrey W. Greenberg, Joyce Frank Menschel, Cynthia Hazen Polsky, Frank E. Richardson, James E. Shipp, and Shelby White. The full Board voted to elect Mr. Brodsky as Chairman at today’s regularly scheduled meeting of the Trustees.

Thomas P. Campbell, Director and CEO of the Museum, commented: “I am delighted by the election of Dan Brodsky and look forward to working ever more closely with him in leading this institution into the next decade of the new century. Dan’s blend of vision and patience—his experience in both the worlds of business and culture—make him the ideal Chairman to help ensure the long-term strength of the museum he loves so much and has served so ably. We have exciting work ahead of us, and I have every faith that Dan will maintain the tradition of thoughtful board leadership that has served the Metropolitan Museum’s audiences—local, national, and international—so well over the years.”

Noted Emily K. Rafferty, President of the Met: “I have had the honor of working with Dan Brodsky on a number of key projects over the past decades, particularly through his leadership of our Real Estate Council. In a period of unprecedented challenge, his devotion and knowledge contributed immensely to preserving and protecting our institution forward. Needless to say, I am most eager to continue working under his leadership to continue moving the Museum forward into the future.”

A 1966 graduate of the University of Pennsylvania with a degree in Urban Planning from New York University in 1968, Mr. Brodsky worked for the Hudson River Valley Commission before joining his late father, Nathan, in 1971 at the family-owned, New York City-based real estate and development firm, The Brodsky Organization, where he is now Managing Partner. In leading his business, Mr. Brodsky has emphasized a principled and sensitive approach to development and community investment.

Since joining the Board of Trustees nearly ten years ago, Mr. Brodsky has served on various committees, notably as Vice Chairman of both the Finance Committee, which oversees Museum budgeting and investing, and the Buildings Committee, where he works closely with the museum administration to guarantee the longtime viability of the 2.3-million-square-foot building, as well as the complex infrastructure that supports it. He also serves on the Board’s Executive Committee, Nominating Committee, Acquisitions Committee, and External Affairs Committee. More recently, Mr. Brodsky has chaired two major special Trustee committees, the first of which is overseeing negotiations with the Whitney Museum for the possible future use by the Met of the Whitney’s current building on Madison Avenue; and the second of which is supervising the planned multi-year comprehensive redesign and reconstruction of the Museum’s outdoor plaza and fountains along Fifth Avenue.

In addition to serving on the Board of the Metropolitan, Mr. Brodsky is a member of the Boards of Directors of the New York City Ballet, the Lincoln Center Development Project, Inc., and New York University Additionally, he serves on the Board of Directors of the Real Estate Board of New York, where he is Vice Chair of the Executive Committee. Previously, he has served as a Trustee of the American Museum of Natural History, the Municipal Art Society, Project Renewal (an organization that provides shelter for the homeless in Manhattan), The Riverdale Country School, the Brearley School, The Dalton School, St. Bernard’s School, and The Trinity School.

Brodsky resides in Manhattan with his wife, Estrellita Brodsky, Ph.D., an art historian, independent curator, collector, and philanthropist dedicated to elevating the presence of Latin American visual culture in museums and the academy. The Brodskys have three children.

Outgoing Chairman James R. Houghton, who was elected to that post on November 10, 1998, first became a Trustee of the Metropolitan Museum in 1982, and from 1984 to1998 was Vice Chairman of the Board, as well as a member of the Executive Committee and Finance Committee. Mr. Houghton was elected a Museum Fellow for Life in 1994, and became a Museum Benefactor in 1996. A former chairman of both the Business Council of New York State and the Harvard Corporation, he also served for 10 years on the New York State Council on the Arts. In his business career, Mr. Houghton was Chairman of Corning Glass, and has served over the years as a director of such corporations as Exxon, The Metropolitan Life Insurance Company, and J. P. Morgan.

From paintings to art glass, wide array fills out Fuller’s lineup May...
Scroll to top