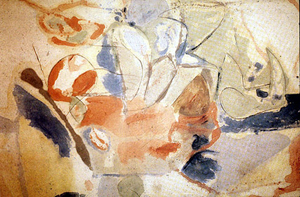 Helen Frankenthaler (American, 1928-2011) Mountains and Sea, 1952. Under the provisions of U.S. Copyright Law, Auction Central News exercises its right to fair use of this copyrighted artwork for which there is no alternative, public domain or free-copyrighted replacement available.

NEW YORK (AFP) – Helen Frankenthaler, an abstract expressionist painter known for pouring pigments directly onto the canvas, died Tuesday at her home in Darien, Connecticut. She was 83.

In announcing her death with “profound sadness,” Frankenthaler’s family said she died after a long illness, but declined to provide further details.

Frankenthaler, whose career spanned six decades, was an eminent painter among the second generation of postwar abstract American artists who played a key role in the transition from abstract expressionism to Color Field painting.

Frankenthaler was inspired by Jackson Pollock and Willem de Kooning, and later influenced such colorists as Kenneth Noland and Morris Louis.

Key to the development of the Color Field movement was the “soak stain”technique Frankenthaler first expressed in Mountains and Sea (1952), whose color washes and unfinished look struck a balance between painting and drawing similar to watercolors. One of her best known works, it is currently on loan at the National Gallery of Art in Washington.

She was the recipient of 26 honorary doctorates and numerous honors and awards, receiving the National Medal of the Arts in 2001.

Although she is best known as a painter, Frankenthaler also made notable forays in lithographs, etchings and screen prints, making a significant mark on printmaking. She even dabbled briefly into sculpture, though with far less success.

In 1958, Frankenthaler married Robert Motherwell, a preeminent figure among the first generation of postwar American abstract expressionists. Known as “the golden couple” for the lavish parties they threw in New York, the pair divorced in 1971.

Frankenthaler is survived by her husband Stephen DuBrul, an investment banker she married in 1994, as well as two stepdaughters — Jeannie and Lise Motherwell — and nieces and nephews. Her older sisters Gloria Ross Bookman and Marjorie Iseman died before the artist. 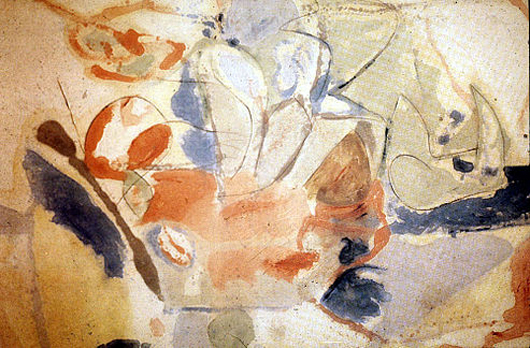 Helen Frankenthaler (American, 1928-2011) Mountains and Sea, 1952. Under the provisions of U.S. Copyright Law, Auction Central News exercises its right to fair use of this copyrighted artwork for which there is no alternative, public domain or free-copyrighted replacement available.