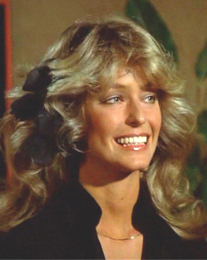 Farrah Fawcett in 1977, in her role as Jill Munroe on season 1 of Charlie’s Angels. Fair use image, courtesy Wikipedia.

LOS ANGELES (AP) – Farrah Fawcett, the Charlie’s Angels star whose feathered blond hair and dazzling smile made her one of the biggest sex symbols of the 1970s, died today, June 25, 2009, after battling cancer. She was 62.

The pop icon, who in the 1980s set aside the fantasy girl image to tackle serious roles, died shortly before 9:30 a.m. Pacific Time in a Santa Monica hospital, spokesman Paul Bloch said.

“After a long and brave battle with cancer, our beloved Farrah has passed away,” O’Neal said. “Although this is an extremely difficult time for her family and friends, we take comfort in the beautiful times that we shared with Farrah over the years and the knowledge that her life brought joy to so many people around the world.”

Said Stewart: “There are no words to express the deep sense of loss that I feel. For 30 years Farrah was much more than a friend, she was my sister, and although I will miss her terribly I know in my heart that she will always be there as that angel on the shoulder of everyone who loved her.”

“Farrah had courage, she had strength, and she had faith. And now she has peace as she rests with the real angels,” Jaclyn Smith said.

Said Cheryl Ladd: “She was incredibly brave, and God will be welcoming her with open arms.”

Fawcett burst on the scene in 1976 as one-third of the crime-fighting trio in TV’s Charlie’s Angels. A poster of her in a clingy swimsuit sold in the millions.

Her full, layered hairstyle became all the rage, with girls and women across America adopting the look.

She left the show after one season but had a flop on the big screen with Somebody Killed Her Husband. She turned to more serious roles in the 1980s and 1990s, winning praise playing an abused wife in The Burning Bed.

Fawcett’s first love was art. A native of Corpus Christi, Texas, she had studied art at the University of Texas, Austin, under Charles Umlauf, who later gave his name to the Umlauf Sculpture Garden & Museum. She pursued her passion for sculpting throughout her adult life and was considered by her peers to be an artist of considerable talent.

In 2000, Fawcett’s collaboration with sculptor Keith Edmier was exhibited at the Los Angeles County Museum of Art and later traveled to the Andy Warhol Museum. The sculpture was also presented in a series of photographs and a book titled Keith Edmier and Farrah Fawcett: Recasting Pygmalion, written by Lynn Zelevansky and Dave Hickey, and published by Rizzolli.

As a teenager, artist Edmier had read that his favorite TV star, Farrah Fawcett, was an artist. Twenty years later, he asked her to collaborate on a project, and she accepted. After nine months in a studio together, the two produced the book of sculpture and photography.

Fawcett had been diagnosed with cancer in 2006. As she underwent treatment, she enlisted the help of O’Neal, who was the father of her now 24-year-old son, Redmond.

This month, O’Neal said he asked Fawcett to marry him and she agreed. They would wed “as soon as she can say yes,” he said.

Her struggle with painful treatments and dispiriting setbacks was recorded in the television documentary Farrah’s Story. Fawcett sought cures in Germany as well as the United States, battling the disease with iron determination even as her body weakened. NBC estimated the May 15, 2009, broadcast drew nearly 9 million viewers.

In the documentary, Fawcett was seen shaving off most of her trademark locks before chemotherapy could claim them. Toward the end, she’s seen huddled in bed, barely responding to a visit from her son.

Fawcett, Kate Jackson and Smith made up the original “Angels,” the sexy, police-trained trio of martial arts experts who took their assignments from a rich, mysterious boss named Charlie (John Forsythe, who was never seen on camera but whose distinctive voice was heard on speaker phone.)

The program debuted in September 1976, the height of what some critics derisively referred to as television’s “jiggle show” era, and it gave each of the actresses ample opportunity to show off their figures as they disguised themselves in bathing suits and as hookers and strippers to solve crimes.

Backed by a clever publicity campaign, Fawcett – then billed as Farrah Fawcett-Majors because of her marriage to The Six Million Dollar Man star Lee Majors – quickly became the most popular Angel of all.

“She was an angel on Earth and now an angel forever,” Majors said Thursday.

A poster of her in a dampened red swimsuit sold millions of copies and became a ubiquitous wall decoration in teenagers’ rooms.

Thus the public and the show’s producer, Spelling-Goldberg, were shocked when she announced after the series’ first season that she was leaving television’s No. 5-rated series to star in feature films. (Ladd became the new “Angel” on the series.)

But the movies turned out to be a platform where Fawcett was never able to duplicate her TV success. She finally reached an agreement to appear in three episodes of Charlie’s Angels a season, an experience she called “painful.”

Fawcett scored public approval with television movies such as Murder in Texas, Poor Little Rich Girl and especially as an abused wife in 1984’s The Burning Bed. The last earned her an Emmy nomination and the long-denied admission from critics that she really could act.

As further proof of her acting credentials, Fawcett appeared off-Broadway in Extremities as a woman who is raped in her own home. She repeated the role in the 1986 film version.

Not content to continue playing victims, she switched type. She played a murderous mother in the 1989 true-crime story Small Sacrifices and a tough lawyer on the trail of a thief in 1992’s Criminal Behavior.

She also starred in biographies of Nazi-hunter Beate Klarsfeld and photographer Margaret Bourke-White.

“I felt that I was doing a disservice to ourselves by portraying only women as victims,” she commented in a 1992 interview.

O’Neal, with whom she had a 17-year relationship, again became her constant companion, escorting her to the hospital for chemotherapy.

She struggled to maintain her privacy, but a UCLA Medical Center employee pleaded guilty in late 2008 to violating federal medical privacy law for commercial purposes for selling records of Fawcett and other celebrities to the National Enquirer.

“It’s much easier to go through something and deal with it without being under a microscope,” she told the Los Angeles Times in an interview in which she also revealed that she helped set up a sting that led to the hospital worker’s arrest.

Her decision to tell her own story through the NBC documentary was meant as an inspiration to others, friends said. The segments showing her cancer treatment, including a trip to Germany where she underwent special procedures, were originally shot for a personal, family record, they said. And although weak, she continued to show flashes of grit and good humor in the documentary.

“I do not want to die of this disease. So I say to God, ‘It is seriously time for a miracle,'” she said at one point.

From Beatles to Buddha, you’ll find it at William Jenack’s June...