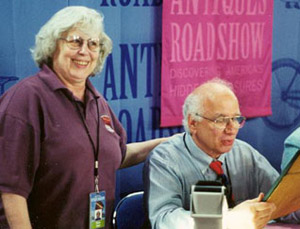 LOS ANGELES – Barbara Franchi, who co-existed with comfort in the worlds of collectible movie ephemera and murder mystery reviews, died on Feb. 28 at her home in Los Angeles. She was 73 years old. According to her husband, Rudy Franchi, the cause of death was cancer related.

Barbara Franchi was founder of the mystery fiction review Web site www.reviewingtheevidence.com, which, within a few short years of its launch, became a major force in the rarefied world of cozies, procedurals, hard-boiled, noir and all the other sub-genres of whodunits. Blurbed on book jackets and quoted extensively, the site was a labor of love for Barbara, who funded it through her career in movie poster sales.

Together with her husband, Barbara operated The Nostalgia Factory, a collectibles shop founded in Montreal in 1969. Its base  was moved to Newport, R.I., and in the mid-1980s to Boston.

During the early 1990s, Barbara transferred the inventory of the shop electronically to the Web site www.nostalgia.com. As an early participant in the world of Internet commerce, the site eventually became a top online vendor of original vintage movie, introducing many innovations that later became common practices in the industry.

Barbara was also co-author of Miller’s Movie Collectibles, which has become a standard text on valuable vintage-cinema paper.
Born Barbara Passel in Long Beach, Long Island, N.Y., on July 5, 1935, she grew up in the Bronx, attending Taft High School and City College. Barbara also accumulated multiple postgraduate degrees in the sciences and education. She taught geology on the college level after marrying Rudy Franchi in
1968 and moving to Montreal.

Her two daughters from a previous marriage, Jill and Susan Frank, were joined by a sister, Regina, in 1969.

Barbara Franchi is survived by her husand and three daughters, her brother Howard
Passel,  her grandson Bennett Piscitelli, and her son-in-law Anthony Piscitelli.