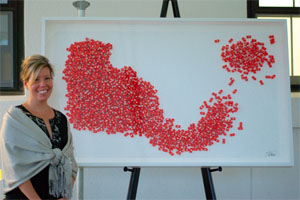 New York City artist Carrie Sunday with her original artwork Spot II/Isolation, which she has donated to a Sept. 25, 2010 live auction benefiting Main Line Animal Rescue of Chester Springs (suburban Philadelphia), Pa. The artwork is valued at $9,500. Absentee bids are being accepted. Photo by Amanda Cox.

NEW YORK – Carrie Sunday, a dynamic young star on New York’s art scene, has created a buzz practically from day one with her colorful abstract works created from paint chip samples and glue.

Strikingly original with their manipulated bas-relief shapes enhanced with painted and razored numbers, letters, tactile Braille dots and whatever else strikes the artist’s fancy, Sunday’s works ordinarily are available through only two sources: her permanent installation at Saks Fifth Avenue, New York; or the Scape Gallery in Newport Beach, California. But on Saturday, Sept. 25, a third venue will be added to the list for one night only when Sunday’s 30 by 50-inch work titled Spot II/Isolation is offered in a live auction to benefit Main Line Animal Rescue (MLAR) of Chester Springs (suburban Philadelphia), Pa. Absentee bids are being accepted.

After seeing a special episode of Oprah that profiled Main Line and made her aware of the organization’s mission of rescuing and re-homing abused, unwanted and abandoned animals, especially victims of southeastern Pennsylvania’s infamous puppy mills, Sunday contacted the shelter to ask how she could help.

“Living in New York, it was really too long a drive roundtrip for me to become involved as a hands-on volunteer on weekends, so I started thinking about what else I could do to make a difference. I asked if I could donate a piece of artwork,” Sunday said. Needless to say, the shelter’s management was overwhelmed with the generosity of Sunday’s offer. Sunday took it one step further, pledging to donate an artwork to MLAR every year for the rest of her life.

“It was very important for me to help this shelter,” Sunday said. “I learned about the horror of puppy mills the hard way. I had bought a dog from a pet store, and it died five days later. I was fighting with the pet store to return my money, and I had $600 in vet bills. Worst of all, I no longer had my dog. Now I have three of the most beautiful dogs, two of which are rescues. One is a rare German breed – a Biewer Yorkie. Most people don’t realize that, if a purebred dog is what they have their heart set on, they are often available from rescues.”

At the time Sunday made contact with MLAR, their volunteer staff was in the process of planning a major fundraising event known as the Wag ’n Train, an outdoor party that includes both live and silent auction components. Sunday selected the artwork she wanted to donate – a creation that had taken her six months to complete – loaded it into her car and personally transported it to the Chester Springs shelter.

Because the artwork is such an extraordinary – and valuable – item, Main Line Animal Rescue is opening the bidding to anyone who wishes to call or e-mail an absentee bid. All left bids will be handled confidentially and lodged competitively by the event’s auctioneer, Courtney Booth, of Sotheby’s New York.

Note: If the winning bidder cannot pick up artwork, they must make their own arrangements to have it crated and shipped.

Born in Brooklyn, N.Y., Carrie Sunday attended Indiana University, where she earned bachelor’s degrees in history and theater. She was working on her master’s degree in forensic psychology when she discovered her aptitude for art.

“I had always been good with my hands and had created birthday cards made from sample paint chips. I wanted to expand the idea to a larger format, but the paint chips were exorbitantly expensive,” Sunday said.

“I had become friends with the owner of Duha Group, which produces paint samples of various types,” Sunday continued. “When I learned that they had nine tons of paint chips that were going to be discarded because the colors were discontinued, I asked if I could have them. I told my friend I would gladly pay the shipping cost if they would let me have the chips.”

It turned out to be a win/win arrangement, Sunday said. “They were thrilled to save on the landfill costs they would have paid, and I received a huge supply of paint chips while at the same time doing something good for the environment.”

Inspired by Piet Mondrian and other abstract innovators of the Modernism movement, Sunday introduced her new art medium to almost instant acclaim. “I was so lucky. My art was very quickly accepted. To be able to sell my artworks at Saks Fifth Avenue and at the Scape Gallery in Newport Beach (Calif.) was more than I ever could have dreamed of.”

Sunday’s commissions have included projects for corporations and residences in Geneva, Naples, Fla.; and Greenwich, Conn.; as well as Manhattan and other locations. Currently Sunday is working on art to be installed in a home being built in Princeton, New Jersey.

Sunday’s art also caught the eye of executives from the French vintners Champagne Ruinart, who selected her as one of their 10 artists of the year. The distinction comes with corporate sponsorship of a show exclusively featuring Sunday’s work – complete with 40 magnums of Ruinart bubbly – and the opportunity to create a unique interpretation of their champagne bottle. 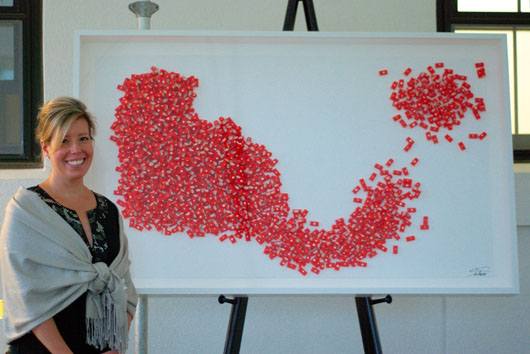