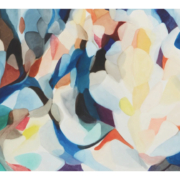 ATLANTA – At the start of every month, ACN columnist Ken Hall delivers top auction highlights from around the United States and the wider world. Presented here is the October 2022 edition of his Gallery Report. All prices quoted include the buyer’s premium, except where noted otherwise. 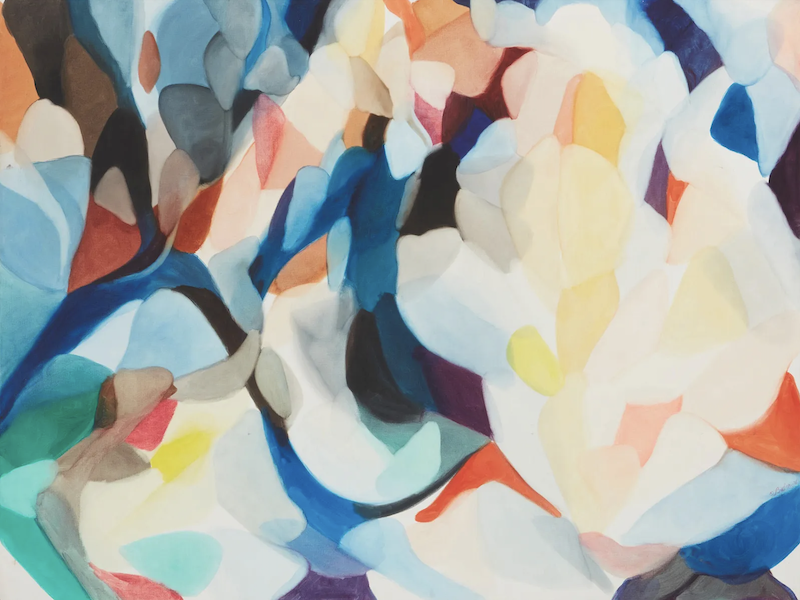 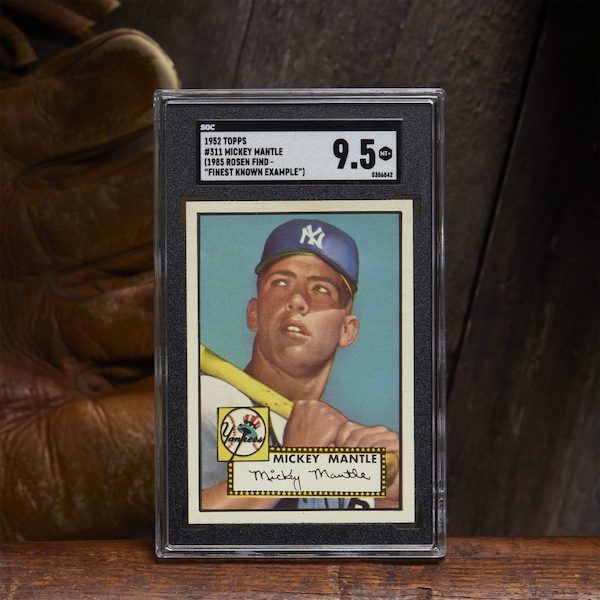 A 1952 Topps Mickey Mantle #311 baseball card, graded Mint + 9.5, sold for $12.6 million at a Summer Platinum Night Sports Auction held August 27 by Heritage Auctions in Dallas. It was the most ever paid for a sports collectible at auction. The card was found in 1985 by Al “Mr. Mint” Rosen, who received a call from a suburban Boston seller whose father had been a delivery driver for Topps. It changed hands several times after that, selling for $50,000 in 1991. 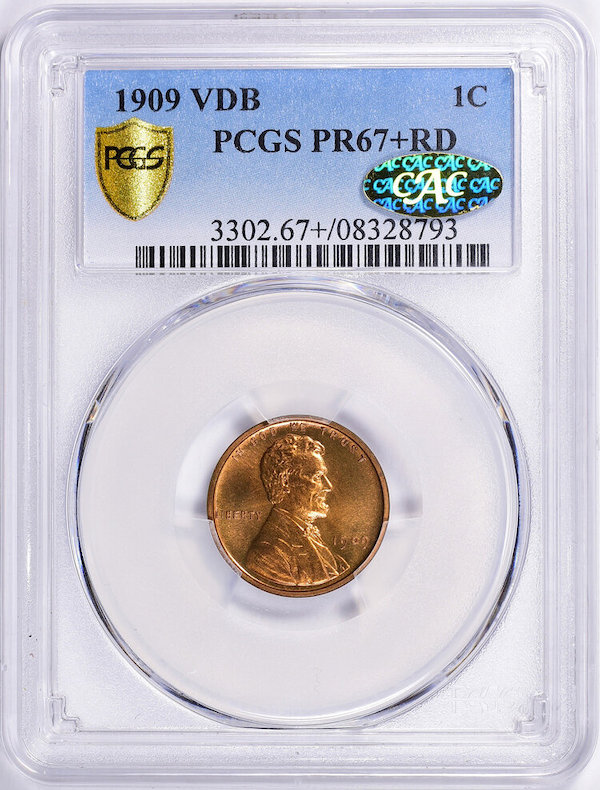 A collection of 10 century-old Lincoln head pennies in superb proof condition and all from the Philadelphia mint sold for a combined $1.113 million in an online auction that ended August 28 at GreatCollections.com, which is based in Irvine, California. One was a first-year issue Lincoln cent from 1909 with designer Victor D. Brenner’s initials on the reverse. It sold for $365,625, a record price for that coin. Also, four other pennies dated between 1909 and 1915 brought more than $100,000 each. 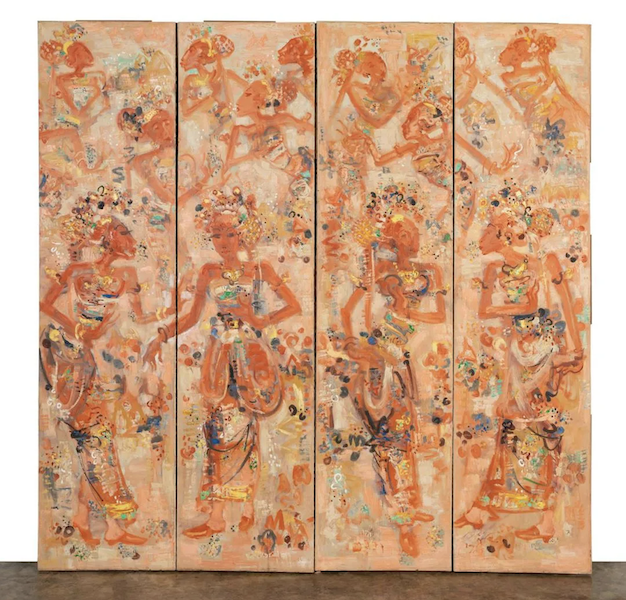 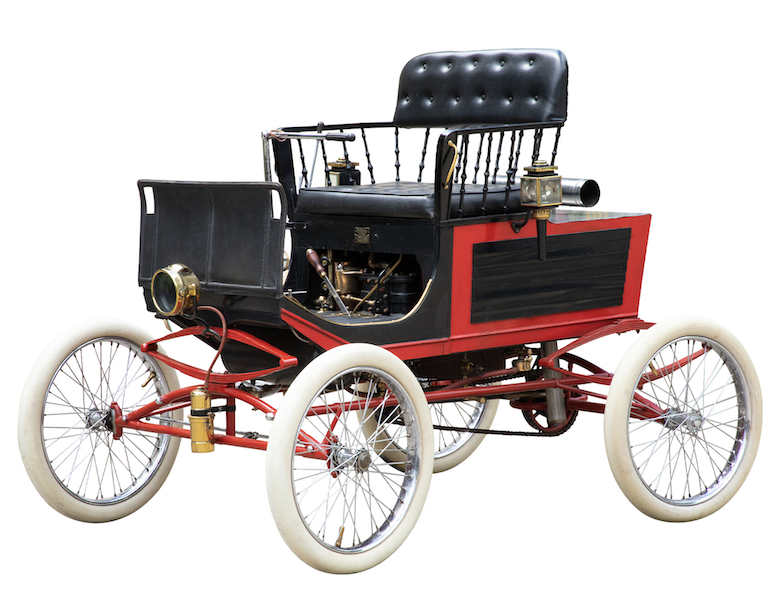 An 1899 Stanley Stanhope Model No. 1 Locomobile vehicle, popularly known as the Stanley Steamer because of its steam engine, sold for $44,250 in an online-only Petroliana & Advertising auction held September 10 by Miller & Miller Auctions, Ltd., in New Hamburg, Canada. Also, a 1907 REO Model A five-passenger touring car chugged off for $41,300, and a prototype of the 1911 Model H REO pickup truck sped away for $35,400. Prices are in Canadian dollars. 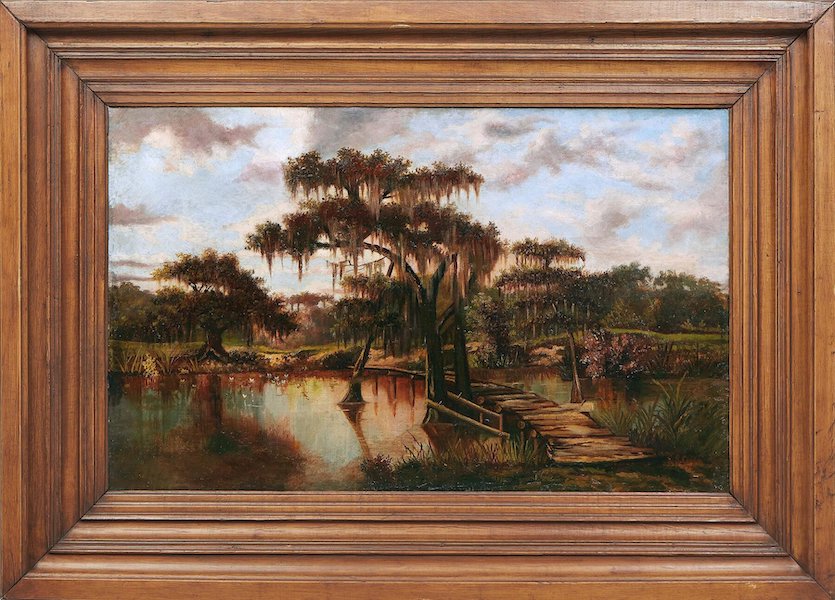 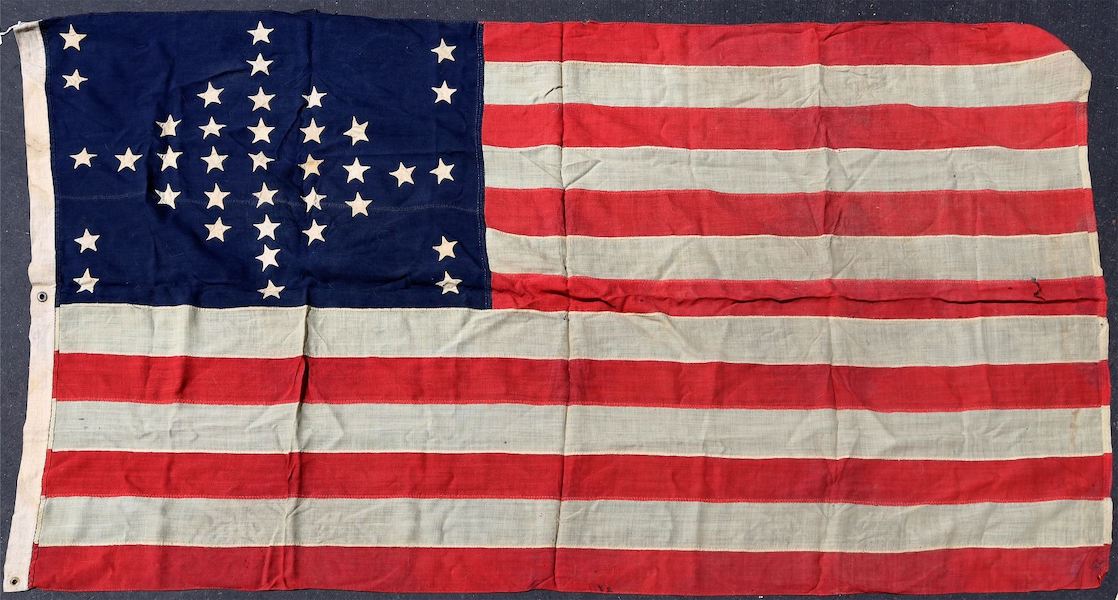 An American flag with 37 stars, made in 1867 upon the admission of Nebraska to the United States, sold for $10,625 at a Rush to the Rockies auction held Aug. 25-28 by Holabird Western Americana Collections in Reno, Nevada. Also, a circa-1898-1908 Vota & DeHeines (Silverton, Colorado) pocket whiskey flask achieved $4,375, and a collection of around 90 Paleo points, aka arrowheads, in a wide variety of shapes and materials changed hands for $8,750. 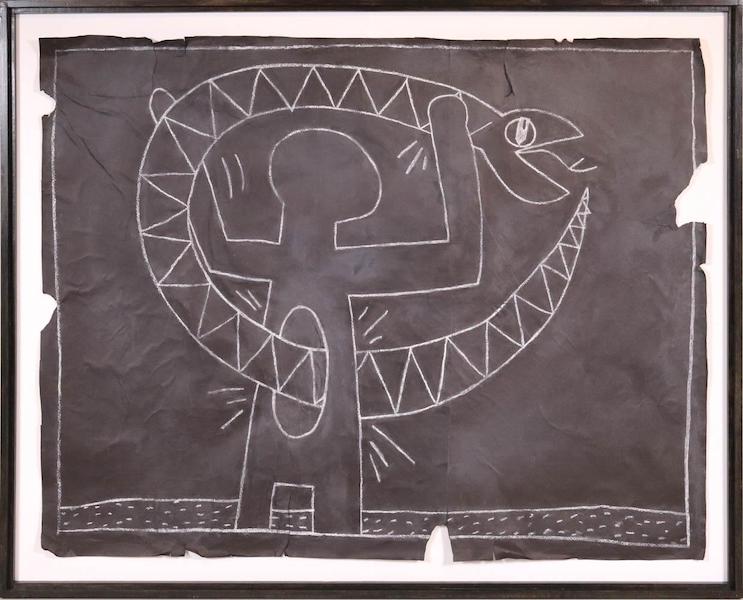 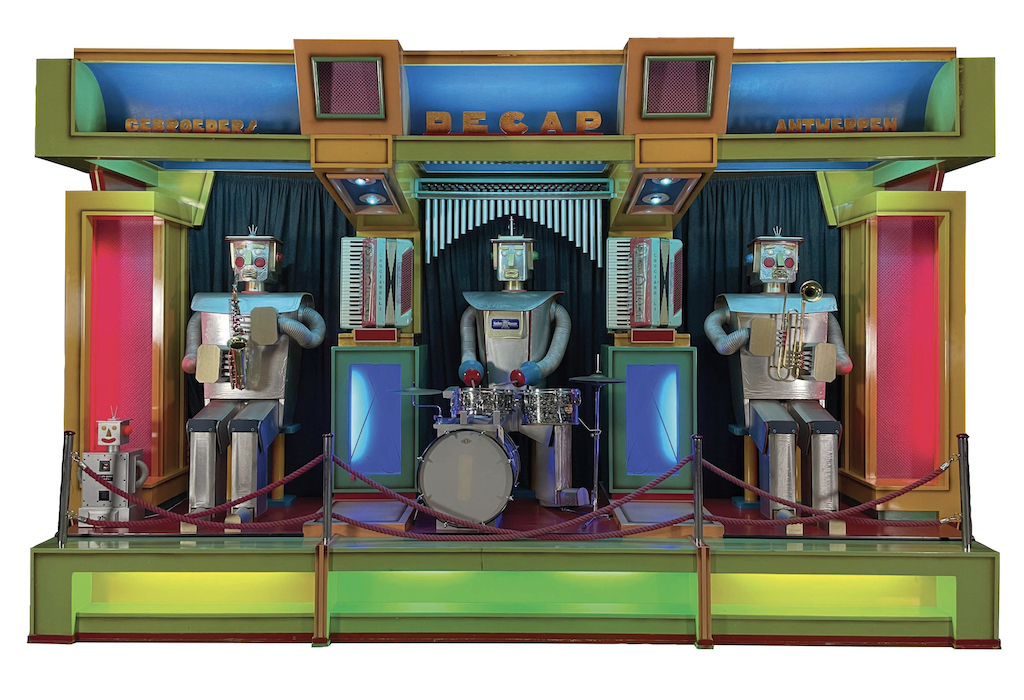 A robot dance organ, created in 1963 by Gebroeders Decap of Antwerp, Belgium and one of only three made in a 105-key configuration, sold for $350,000 at the auction of the Henri Krijnen musical machines collection held Sept. 9-10 by Morphy Auctions in Denver, Pennsylvania. Also, an ornate and gilded Koenigsberg 70-key Harmonium street organ, made in Holland in 1910, found a new home for $54,120; and a Gastaud et Raibaut for Bodson Double Tino orchestrion, made in Paris in 1925, brought $73,800. 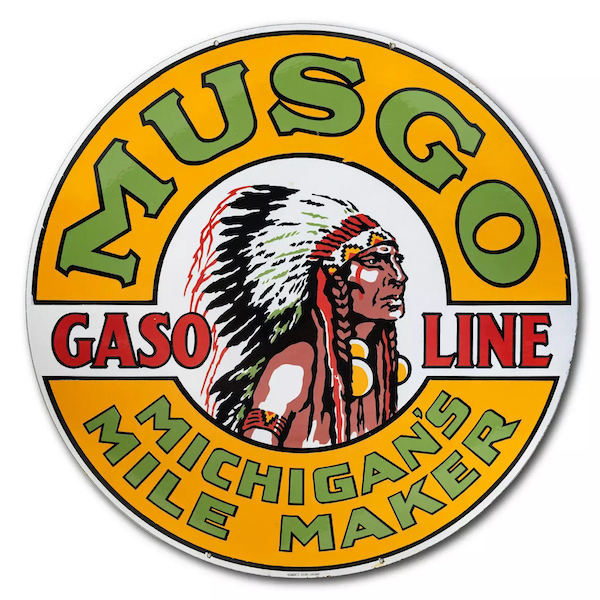 A double-sided porcelain Musgo Gasoline sign sold for $1.5 million at an auction held August 27 by Richmond Auctions in Greenville, South Carolina. It was a new world auction record for an antique advertising sign, besting the previous record of $400,000. The sign was discovered in an attic in Michigan and had never been seen by the public. It also had never been used as a septic tank lid, which was the ultimate fate of many Musgo signs created in the company’s six months of existence during the mid-1920s. 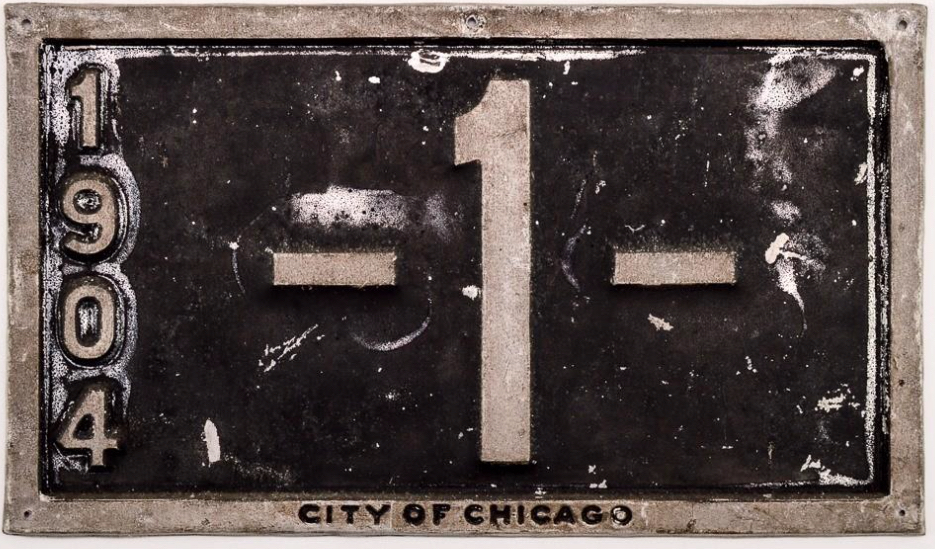 A Chicago license plate from 1904, considered the holy grail of the Chicago plates, sold for $34,000 at a Vintage License Plates & Vehicle Tags sale held August 28 by Donley Auctions in Union, Illinois. The plate, made from aluminum sheeting and painted black, featured “1904” stamped vertically on the left-hand side, the number “1” bookended by two dashes in the middle, and the words “City of Chicago” in the lower bottom edge. Chicago switched to brass plates in 1905. 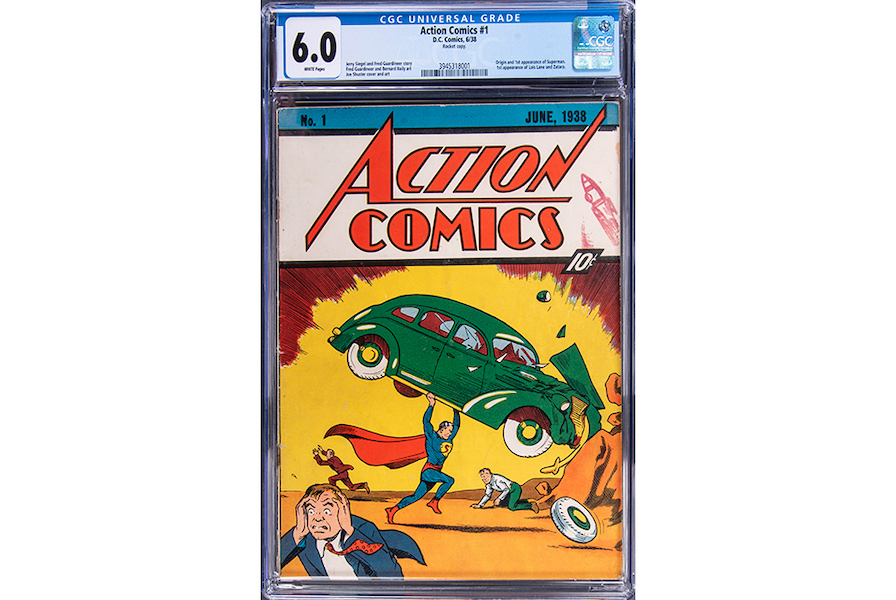 A copy of Action Comics #1, published in 1938, graded CGC FN 6.0, and known as the Rocket Copy because of a rocket stamp placed on the cover more than 80 years ago by the original owner, a 13-year-old who purchased it from a newsstand, sold for $3.4 million in a private sale handled in September by Goldin Auctions of Runnemede, New Jersey in conjunction with Metropolis Comics of New York. Superman was created by Jerry Siegel and Joel Shuster; Action Comics #1 is credited with helping to launch the superhero genre.

A Costa Rica 1918 Cien Colones banknote with five line provisional overprint in red, graded in Very Fine condition, sold for $36,300 at an auction of the Kop family collection of Costa Rica coins and banknotes held September 13 by Doyle in New York City. The auction totaled $1.164 million, which surpassed the total high estimate of $692,050. It was 97 percent sold by lot and 100 percent sold by value. 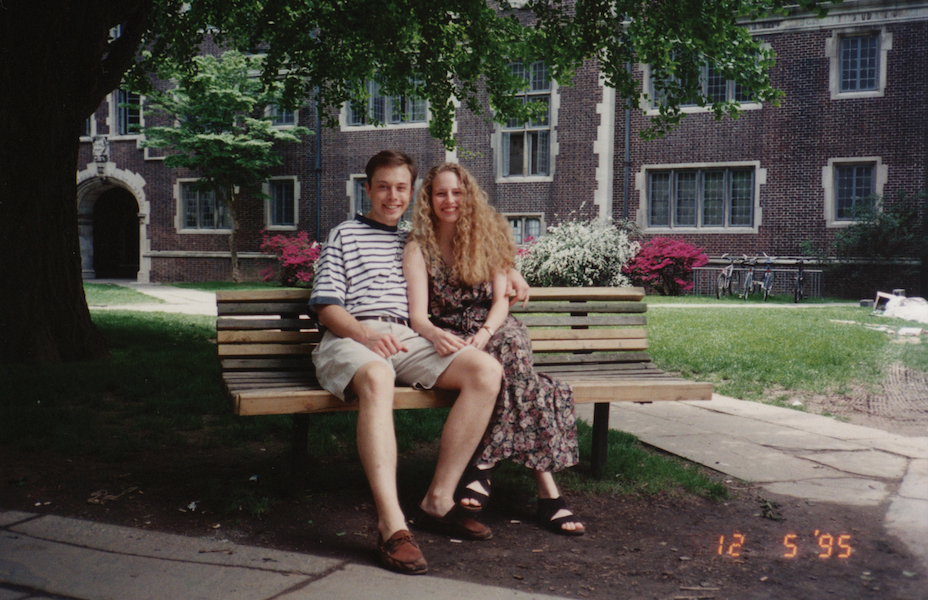 A collection of never-before-seen Elon Musk photos and memorabilia from his college girlfriend Jennifer Gwynne sold for $165,265 in an online auction held Aug. 12-Sept. 14 by RR Auction, based in Boston. A 1995 photo of Musk and Gwynne sold for $2,773; a 14K gold and emerald necklace given by Musk to Gwynne, plus two photos, reached $51,008; and a birthday card inscribed by Musk to Gwynne hit $16,643. 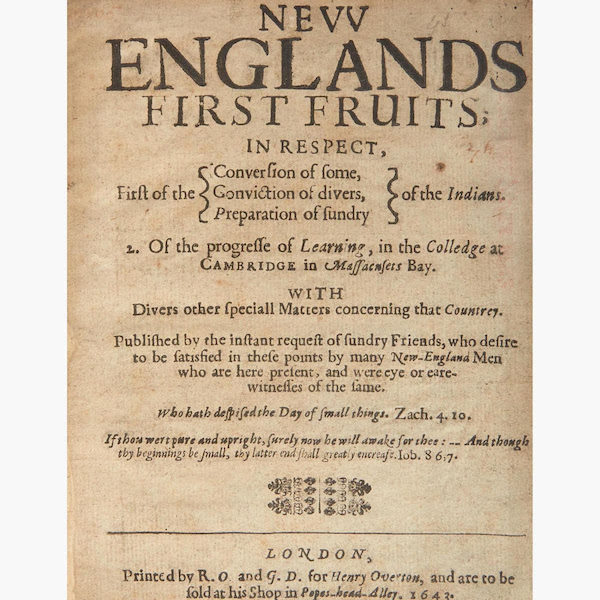 A first edition copy of New Englands First Fruits, which discusses early colonial New England and includes the first printed account of Harvard University, sold for $277,200 at a Books and Manuscripts auction held September 21 by Freeman’s in Philadelphia. Also, a first edition copy of L. Frank Baum’s The Wonderful Wizard of Oz attained $37,800; a scarce copy of the Narrative of Sojourner Truth rose to $27,720; and a 1738 colonial treatise on paper money changed hands for $21,420. 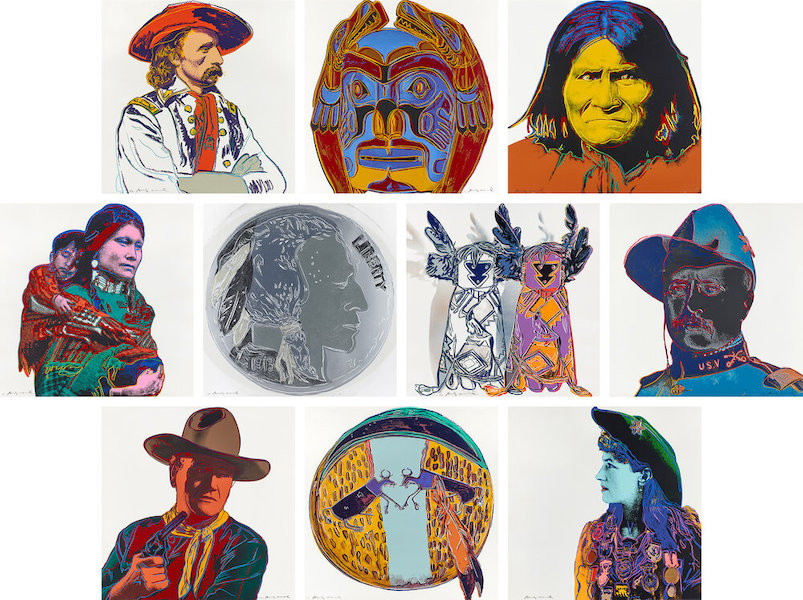 A complete set of 10 screenprints of Andy Warhol’s (American, 1928-1987) Cowboys and Indians series from 1986 sold for $503,750 at a Fall Modern + Contemporary Art + Design auction held September 16 by Clars Auction Gallery in Oakland, California. Other strong performers included a 2007 black cast vinyl sculpture by KAWS (American, b. 1974-), titled Four Foot Companion, which realized $75,000, and an Angelo Mangiarotti Eros dining table that made $18,750. 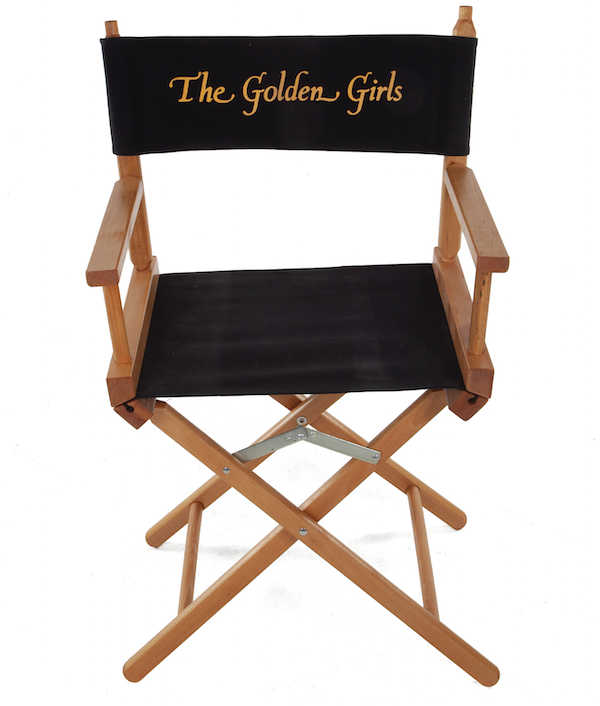 A director’s chair used by Betty White during the production of the hit TV show The Golden Girls sold for $76,800 at an auction titled Property from the Life and Career of Betty White held September 25 by Julien’s Auctions in Beverly Hills, California. Also, a lavender dress with white dots worn by White in 1986 publicity images rang up $32,000; and two of White’s teleplays, for the pilot and final episode of The Golden Girls, went for $57,600 and $51,200, respectively.

A famille rose Nine Peaches globular bottle vase of Tianqiuping form and dating to the Qianlong period (1735-1796) sold for $860,000 at a Chinese & Himalayan Works of Art auction held September 23 by Hindman in Chicago. Also, a painting by Qi Biashi, titled Chrysanthemums and a Dragonfly, left the room for $68,750; a small lemon-yellow glazed porcelain saucer dish earned $25,000; and a blue glazed porcelain bowl and a copper red glazed porcelain dish realized $17,500 apiece. 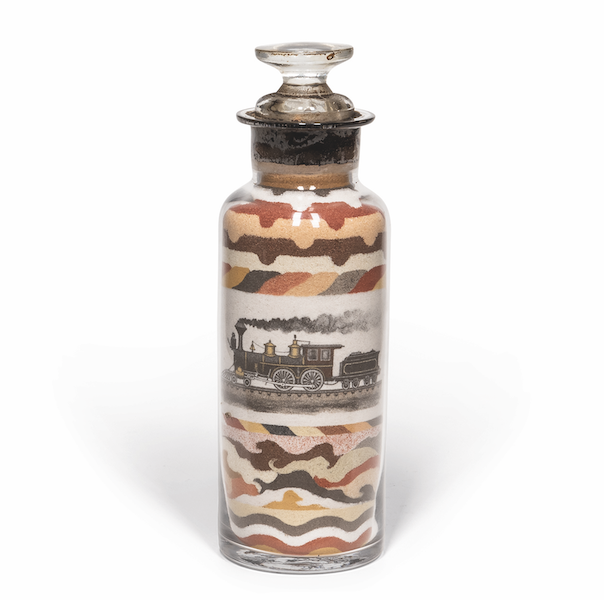 Two patriotic sand bottles by Andrew Clemens, one of which is shown here, sold for a combined $98,750 ($75,000 and $23,750, respectively) at an Americana sale held August 13 by Bonhams Skinner in Marlborough, Massachusetts. Other standouts include the original manuscript journal of Cleopatra’s Barge on a Voyage of Pleasure (Vol. 1) by James Crowninshield, which went for $100,000; a John Halley Bellamy carved and painted patriotic eagle plaque that realized $20,000; and a carved, gilded and painted Phrygian cap that earned $10,000. 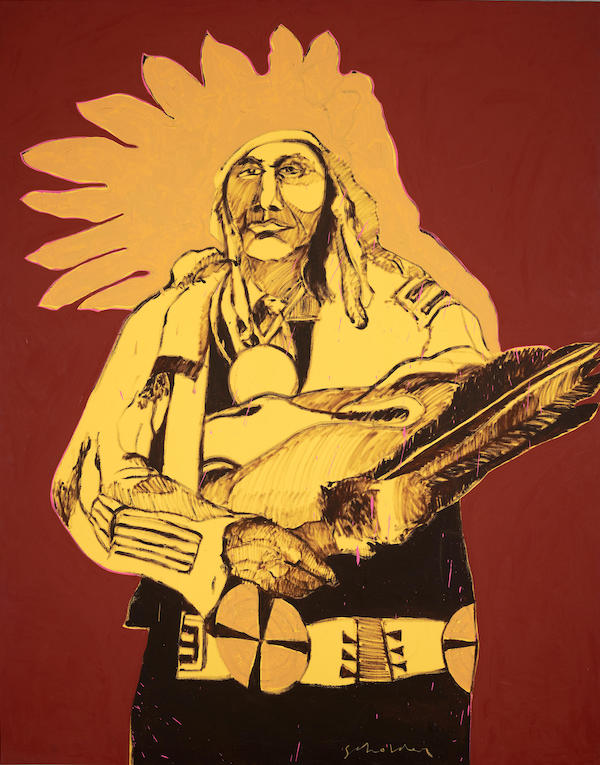 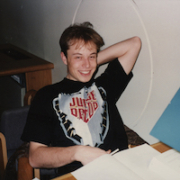 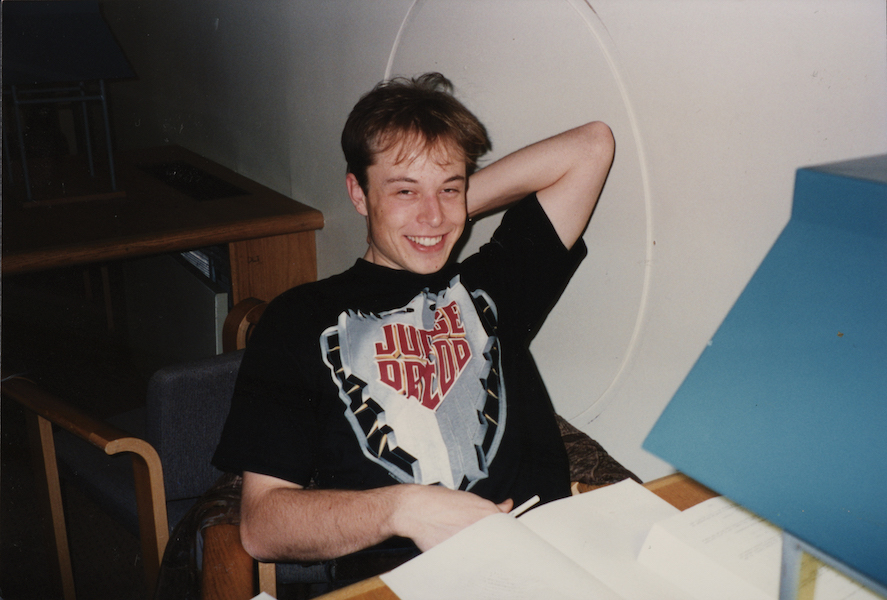 Candid 1994 photo of Elon Musk, taken during his senior year at the University of Pennsylvania, $9,375

BOSTON – A collection of never-before-seen Elon Musk photos and memorabilia from his college girlfriend, Jennifer Gwynne, sold for a combined total of $165,265 at RR Auction on September 14.