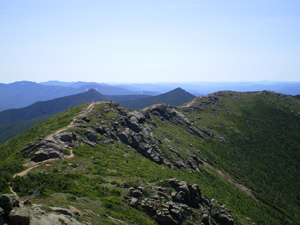 The Franconia Ridge, a section of the Appalachian Trail in New Hampshire. This file is licensed under the Creative Commons Attribution-Share Alike 3.0 Unported, 2.5 Generic and 1.0 Generic license.

HARPERS FERRY, W.Va. – This year marks the 75th anniversary of the completion of the Appalachian Trail, the longest hiking-only footpath in the world, measuring roughly 2,180 miles in length from Georgia to Maine. The anniversary will occur on Tuesday, Aug. 14.

The original trail took more than 15 years to build and was completed on Aug. 14, 1937. Construction involved the cooperation of hundreds of volunteers, state and federal partners, local trail-maintaining clubs, the Civilian Conservation Corps and the Appalachian Trail Conservancy.

An estimated 2 to 3 million people visit the Appalachian Trail every year. Hikers from across the globe are drawn to the trail for a variety of reasons: to reconnect with nature, to escape the stress of city life, to meet new people, strengthen old friendships or to experience a simpler life. About 2,000 people attempt to “thru-hike” the estimated 2,180 miles of the trail each year, with only one out of four completing the entire journey.

“This year marks a milestone for the Appalachian Trail,” said Mark Wenger, executive director of the Appalachian Trail Conservancy. “Not only does this anniversary celebrate the completion of the trail, it also celebrates the unique collaboration and determination of countless individuals, private organizations, and state and federal agencies in their efforts to complete this long-distance hiking trail from Maine to Georgia.”

The conception of the trail came from the October 1921 article “An Appalachian Trail: A Project in Regional Planning” in the Journal of the American Institute of Architects. Written by Benton MacKaye, he proposed the idea as an escape from daily life in an increasingly industrial nation. MacKaye originally called for a series of work, study and farming camps along the Appalachian Mountains, but building a trail to connect them soon became his primary objective. The Appalachian Trail Conference, now called the Appalachian Trail Conservancy, was founded four years later in 1925.

Since the Appalachian Trail was first completed in 1937, it has undergone a remarkable transformation. Almost 99 percent has been relocated or rebuilt. Hundreds of miles of the original route were along roads and passed through private lands. Thanks to the determination of Myron H. Avery and the ATC, the passage of the National Trails System Act, and the work of many partners and volunteers, more than 99 percent of the Appalachian Trail is now in public ownership. Not only is the footpath itself protected, but a corridor of land, averaging 1,000 feet in width, is also protected.

The Appalachian Trail today is not only better protected but traverses more scenic landscapes than the original route. Many of the Appalachian Trail’s most cherished highlights were not part of the trail in 1937: Roan Mountain, Tenn.; the Mount Rogers High Country, including Grayson Highlands, Va.; the Pochuck Creek swamp, N.J.; Nuclear Lake, N.Y.; Thundering Falls, Vt.; and Saddleback Mountain, Maine, to name a few.

The treadway itself each year becomes more sustainable. Except for places where the Civilian Conservation Corps provided additional support (mostly in Shenandoah National Park, the Great Smoky Mountains and Maine), the original trail was often routed straight up and down mountains, making for rough hiking and a treadway prone to severe erosion. The ATC’s trail crews and volunteer trail-maintaining clubs have relocated or rehabilitated countless miles of trail and each year continue to improve the treadway.

As a unit of the National Park System, the trail is managed under a unique partnership between public and private sectors that includes the ATC, National Park Service, USDA Forest Service, 31 local trail-maintaining clubs and an array of state agencies.

To celebrate the 75th anniversary of the completion of the A.T., the ATC will host a weekend celebration on Aug. 11 and 12 at its headquarters at 799 Washington St., Harpers Ferry, W.Va. Highlights include guest speakers, workshops, activities, food, music and games.

For more information about the 75th anniversary of the completion of the Appalachian Trail including ways to give back and local celebrations, visit www.appalachiantrail.org/75. 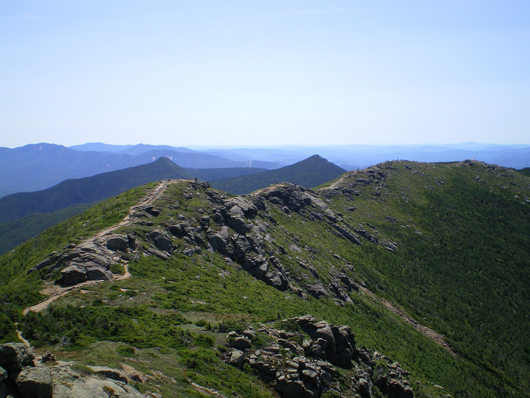 The Franconia Ridge, a section of the Appalachian Trail in New Hampshire. This file is licensed under the Creative Commons Attribution-Share Alike 3.0 Unported, 2.5 Generic and 1.0 Generic license.