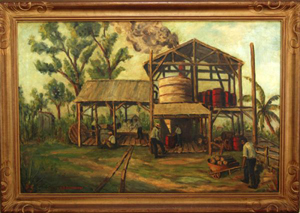 BATON ROUGE, La. (AP) – Archaeologists got a glimpse into what life was like in Louisiana in centuries past through the recent excavation of the old sugar mill at the 575-acre Chatsworth Plantation in south Baton Rouge.

Searching through and around the base of the caved-in brick building that once housed a steam-powered sugar mill near Louisiana Highway 30 and Gardere Lane, the team found items such as a Gay-Ola Cola bottle from the early 1900s, a human tooth and more than 200 French gun flints believed to have been used by slaves and workers to build fires.

Now they are working to catalog the items for an exhibit at the LSU Rural Life Museum to paint a broad picture of the time period.

Dennis Jones, the LSU Rural Life Museum’s principal archaeological investigator for the excavation, detailed the finds and plans for a future exhibit in a recent presentation to the Baton Rouge Genealogical and Historical Society.

Jones said researchers hope to finish cataloging all the items they found – including ceramic marbles, porcelain dolls, brass boot heel plates, ginger beer bottles, different coins and items belonging to American Indian tribes who lived in the area until the 1780s – in the next few months.

Jones also said he will probably write a book at some point about the excavation and what they learned along the way.

Initial work began in 2010 by local business Coastal Environments after Pinnacle Entertainment, the parent company of L’Auberge Hotel and Casino, tried to acquire a permit to build on the Mississippi River levee, Jones said. The Army Corps of Engineers told the company they first had to make sure there were no historical sites on the property, he said.

In the first dig, more than 20,000 items, including broken farm equipment and pottery shards, were recovered and cataloged.

Archaeologists from the Rural Life Center began working in October 2012 to clear vegetation around the base of the sugar mill, even bringing in a backhoe to help. They finished in December 2013.

“Most folks think a backhoe has no place in archaeology, but I’m here to tell you it does, especially for this place,” Jones said.

Once they cleared away the vegetation and dead trees, researchers found tunnels running underneath the base of the mill, Jones said.

There were alcoves in the tunnels where workers would tighten the screws holding the mill’s grinder in place so the vibrations did not cause the grinder to shake free, Jones said.

They also found areas where double-pen slave and worker cabins sat as well as privies and trash sites.

In his presentation, Jones explained how sugar was at one time one of the more sought after commodities in the world and industrial innovations made it easier, though still risky, to harvest the cash crop in southern Louisiana. Transporting the sugar cane via steamboat was also dangerous because of the dangers in riverboat travel.

Steam grinders had replaced the animal-powered grinders that had limited the amount of sugar cane farmers could harvest at one time, Jones said. Soon, more than 1,000 large mills popped up all over Louisiana, as plantation owners realized the windfall of a successful sugar cane crop.

The history of the Chatsworth Plantation goes back to Fergus Duplantier, son of Magnolia Mound owner Armand Duplantier, who bought about 2,000 acres near the Mississippi River around 1830 to plant sugar cane, Jones said. The first crop was harvested in 1844, the same year Fergus Duplantier died.

One of his adopted sons took over running the sugar cane operation and built the plantation in 1859, Jones said. The plantation went through several owners, including Francois Gardere, until the federal government ordered the by then dilapidated home torn down in 1930 to build new levees following the flood of 1927.

Years passed and the vegetation took over, growing back where sprawling sugar cane fields once sat and erasing most of the existence of the Chatsworth Plantation.

“By 1992, you would have never known anything was ever there,” Jones said.

Information from: The Advocate, http://theadvocate.com 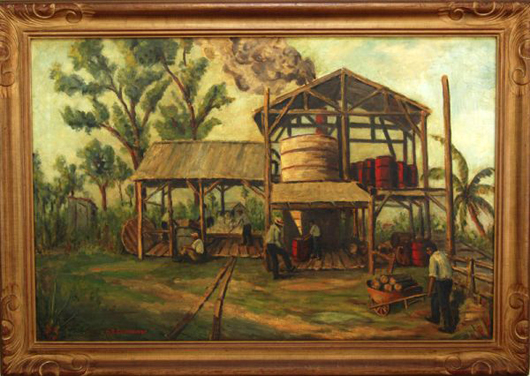