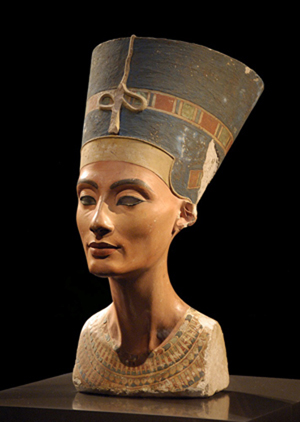 The Nefertiti bust at the New Museum, Berlin. Image by Philip Pikart. This file is licensed under the Creative Commons Attribution-Share Alike 3.0 Unported license.

BERLIN (AFP) – Berlin will open a major new exhibition Thursday celebrating the centenary of the discovery of the 3,400-year-old fabled bust of Egypt’s Queen Nefertiti as a feud with Cairo over its ownership rages on.

The show at the city’s New Museum showcases its most famous treasure, considered the most priceless depiction of the female visage after the Mona Lisa, and other booty carted home by German archaeologists after the Dec. 6, 1912 find.

These include never-before-seen jewels of the Amarna period unearthed at the time by Ludwig Borchardt and loans from institutions including the Metropolitan Museum of Art in New York, the Louvre in Paris and London’s British Museum.

“There are artworks that belong to our collective consciousness – Nefertiti is such a work,” German Culture Minister Bernd Neumann told reporters at a preview of the show entitled “In the Light of Amarna.”

Nefertiti, renowned as one of history’s great beauties, was the powerful wife of Pharaoh Akhenaton, remembered for having converted his kingdom to monotheism with the worship of one sun god, Aton.

The sculpture, so fragile and valuable it is barred from being lent out, is the biggest draw at the museum, which was reopened in 2009 after a major restoration by British star architect David Chipperfield and now draws about 1 million visitors a year.

The limestone and plaster bust, dramatically displayed at the end of a long corridor under a dim spotlight, is stunning for its almond-shaped eyes – the right of which is missing the iris, aquiline nose, high cheekbones, sensuous lips and lofty blue crown with a band of red, grey and gold.

Its chipped ears are, remarkably, the only significant sign of damage exacted over the centuries.

The sculpture is at the top of a “wish list” of five major artifacts exhibited abroad that Egypt wants returned.

The campaign, spearheaded by former antiquities chief Zahi Hawass, has waned since the Arab Spring as Egypt grapples with more existential issues.

But officials in Berlin indicated the dispute rumbled on behind the scenes, despite what it said were documents proving the bust was bought legally by the former Prussian state.

“To head off any questions, let me say there is no doubt that Nefertiti rightfully belongs to the Berlin state cultural heritage foundation,” Neumann said.

He said endlessly competing ownership claims would only lead to “chaos” and insisted that Berlin took seriously its responsibility to preserve the bust for eternity.

“The real question of to whom Nefertiti belongs is easily answered – to us all,” he said.

The director of Berlin’s Egyptian Museum, housed in the New Museum, Friederike Seyfried, said the Arab Spring’s upheaval had prevented scholarly cooperation with Egypt on the show and said she wished this could resume soon.

“I hope the political situation stabilizes there and doesn’t go in a direction we would regret,” she said.

Amarna refers to the ruins of an ancient city founded by Akhenaton, where Borchardt and his team excavated more than 7,000 archaeological objects, about 5,500 of which made their way to Berlin.

The Berlin show will run until April 13 and features more than 1,000 of these objects including floor tiles from the royal palace featuring elaborate floral garlands, jewelry and ceramics.

A bust of Akhenaton restored especially for the exhibition is another keenly awaited highlight.

The show covers theology as well as art of the era, including discoveries from the sculpture workshop of Thutmose, believed to have crafted Nefertiti, and the daily life of Amarna’s citizens.

And it sheds new light on the work of James Simon, Borchardt’s Jewish benefactor, whose contributions were largely rubbed out of the historical record under the Nazis. 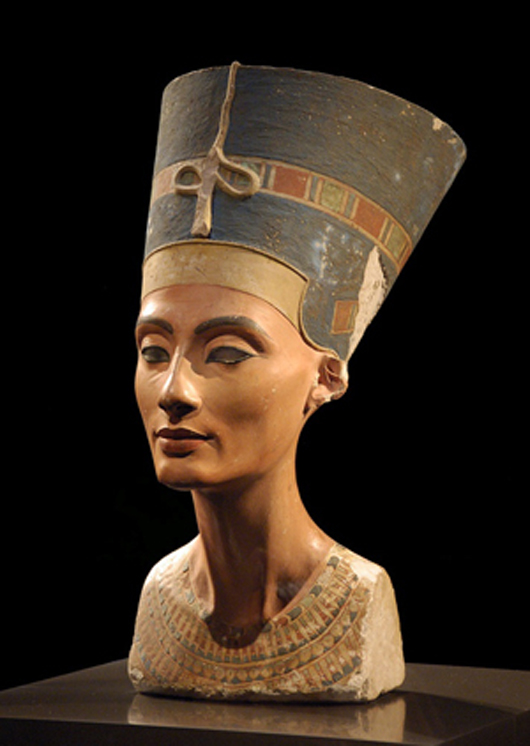 The Nefertiti bust at the New Museum, Berlin. Image by Philip Pikart. This file is licensed under the Creative Commons Attribution-Share Alike 3.0 Unported license.