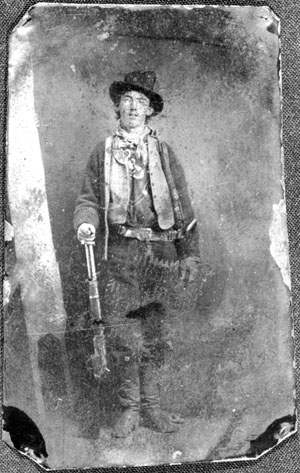 Tintype of Billy the Kid, who posed for the picture in a Fort Sumner, N.M., gambling hall in late 1879 or early 1880. The rare tintype, believed to be the only survivor of four that were created, will be auctioned on June 25 at Brian Lebel’s Old West Show and Auction.

SANTA FE, N.M. (AP) – In late 1879 or early 1880, Billy the Kid posed for a picture at a Fort Sumner gambling hall. Wearing a crumpled dark hat, a sweater, a vest and boots, he stood with his hand resting on a Winchester rifle on one side and a Colt revolver holstered on the opposite hip.

The pose was captured on four 2-by-3-inch tintypes. Three are believed to have been lost or destroyed. The only one left – what some call the only authenticated image of the famous outlaw – comes up for auction this summer.

“This is it – the only one,” says Brian Lebel, who estimates the image should bring in between $300,000 and $400,000 on June 25 at his 22nd annual Old West Show and Auction at the Denver Merchandise Mart. “We’ve all seen this image of Billy countless times, but when you hold the actual three-dimensional tintype in your hands, it’s a whole different experience.”

After Billy the Kid died in 1881, one of his rustler partners, Dan Dedrick, kept the tintype. Dedrick passed it to his grand-nephew, Frank Upham, who willed it to his descendants, Stephen Upham of California and Art Upham of Arizona.

During the mid-1980s, Frank Upham loaned it to the Lincoln County Heritage Trust Museum in Lincoln. For about three years, that was the only time the tintype has been publicly displayed.

According to Beverly Hammond, a historical interpreter at the center for some 30 years, around 1986, the tintype was sent to the Eastman Kodak Co. in Rochester, N.Y., for analysis. When it was returned, it was “very, very dark. … You could see the hat and you could see gun and the boots, but other than that, it was just a blur.”

“It might be darker than it was, but it’s not a dark tintype,” he said. “It hasn’t been restored. They have not done anything to it since they took it back from the museum. All they’ve done is stored it in a nitrogen-filled envelope, which was recommended to them, and they’ve left it in a safe-deposit box. It’s still in a safe-deposit box. I took it out last week and showed three museum curators who all felt that it was a good, clear, sharp image.”

Bob McCubbin, a Santa Fe-based collector of Western photography, said he hasn’t seen the photograph since it was treated in Rochester. But, he said, “I was told by someone that I consider reliable that saw it after the damage … (that) it was virtually black, so I’ve been under that impression for some time.”

He said the story may have been exaggerated because the Upham family has not responded to inquiries about the tintype for two decades.

“I’ve not had the opportunity to see it myself, but a friend of mine did recently and said it looks pretty good,” McCubbin added.

Hammond agreed the tintype is the only known portrait of Billy the Kid, but she said he also appears in the background of a photograph of cowboys at the Chisum Ranch near Roswell. McCubbin said he thinks there might be a couple of portraits of Billy the Kid – also known as William H. Bonney, Henry Antrim and Henry McCarty -as a boy in Silver City.

McCubbin said the tintype is the only adult image that is indisputably authentic.

Study the image and Billy’s jaw line seems asymmetrical. Lebel said that’s because the Kid moved his head slightly or “made a face” during the long exposure time required. McCubbin said the distortion might result from low light the photographer tried to correct by using a reflective mirror, visible on the left side. He said engravings, used for early reproductions of the tintype, might have further exaggerated the facial distortion.

A long-held belief Billy the Kid was left-handed – enshrined by the 1958 movie The Left Handed Gun, starring Paul Newman – stems from the fact he appears to wear his holster on his left side.

But a tintype, made with an early form of photography that used metal plates, is a mirror image in which left and right are reversed. This was rediscovered by firearms experts who realized the loading chamber of the rifle in the photograph is on the wrong side.

Because of the many stories about the tintype, Lebel said he invites people to view it for themselves during the three-day Western show, June 24 to 26. He expects as many as 500 people to attend the June 25 live auction.

“The fun thing about the tintype is that everybody does have their own little story,” Lebel said. “Some people say he dressed in that hat, in that pose, only because he was clowning around. … I’ve been a fan of it since it appeared and when I first put my hands on it in person, my knees shook. It’s one of those things that’s going to be exciting to a lot of people.”

McCubbin said he knows two wealthy collectors who plan to bid in Denver – but they want it for their own collections, not for donation to the Museum of New Mexico. He figures it could sell for anywhere from $100,000 to $1 million.

“It’s going to be out of my price range,” he said. “It is one of a kind and, honestly, I’ve heard a lot of people, a lot of my friends, refer to it as the holy grail of photography. I cannot think of another photograph in the entire world that is as famous.”


Copyright 2011 Associated Press. All rights reserved. This material may not be published, broadcast, rewritten, or redistributed. 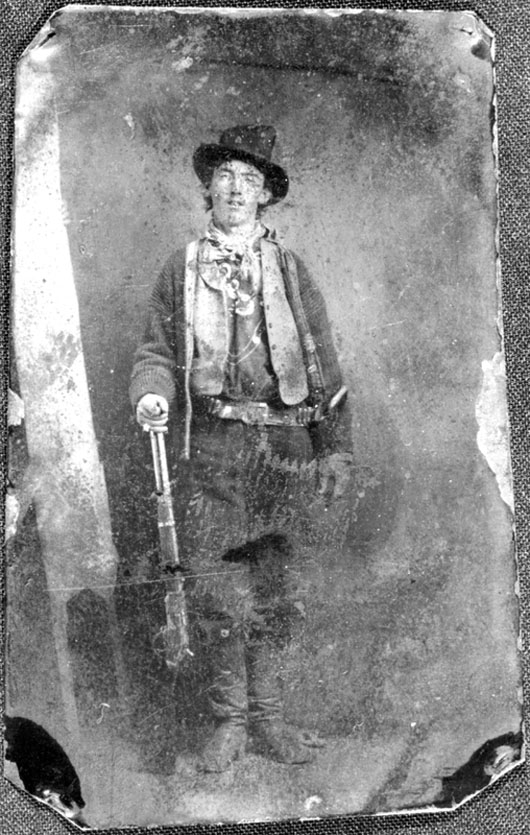 Tintype of Billy the Kid, who posed for the picture in a Fort Sumner, N.M., gambling hall in late 1879 or early 1880. The rare tintype, believed to be the only survivor of four that were created, will be uctioned on June 25 at Brian Lebel’s Old West Show and Auction.