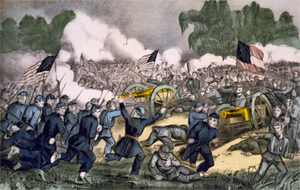 GETTYSBURG, Pa. (AP) – The town where the Civil War’s tide-turning battle was waged is fighting dissension in its own ranks, with even hard-core preservationists split over a proposed casino that would rise near the historic battlefield and be named for the line that divided North and South.

It’s the second time in five years that Gettysburg has fought over a plan to build a casino. This time it’s the Mason Dixon Resort & Casino, proposed on a hotel and conference center site within a mile of the southern boundary of Gettysburg National Military Park.

“No Casino” and “Pro Casino” signs pepper shop windows in the quaint streets of Gettysburg, where more than a million tourists shop, dine or sleep each year.

Supporters say the casino plan doesn’t tread on hallowed ground and will bring jobs, more tourists and tax relief to the area. But the potential that a casino will cheapen the wholesome reputation that draws tourists to Gettysburg, where 160,000 Union and Confederate soldiers fought a three-day battle in the summer of 1863, is what worries many.

“It seems like a lot of people, they just want more business, they want more money to flow in the community at any cost, and that’s really upsetting,” said Barbara Schultz, a Gettysburg native and casino opponent who owns a bed and breakfast and art gallery.

Casino principals, supporters and opponents will speak at a public meeting Tuesday with state regulators who are considering the license application to build the casino.

The developer, David LeVan, is a noted local philanthropist and former Conrail Inc. chairman who lives across the street from the park’s museum and visitors center. He has helped renovate the town’s historic Majestic theater and donated family land to help preservation efforts.

He declined to comment Tuesday through a spokesman, David La Torre, who pointed out that the area around the nearly 6,000-acre park is already saturated with hotels, fast-food restaurants and big-box stores.

The Pennsylvania Gaming Control Board rejected LeVan’s first plan in 2006 amid an outcry that gambling would sully the character of the battlefield where Union soldiers stopped the Confederate advance.

LeVan and supporters contend the new casino plan is much smaller than the first _ they are seeking a license that allows up to 600 slot machines and 50 table games _ and would pump new life into a struggling hotel and conference center.

The county is supporting the plan in exchange for a $1 million annual contribution to its treasury. A local group, the Gettysburg Battlefield Preservation Association, endorses the plan, saying the potential to strengthen the local economy could boost preservation efforts. Park officials say they have determined that the casino does not directly affect park resources.

Still, the Civil War Preservation Trust put the Gettysburg National Military Park on its endangered list because of the casino plan.

In April, Ronald Maxwell, who made the epic 1993 movie “Gettysburg,” came to town to deliver an impassioned speech to casino opponents.

“Why stop at Gettysburg? Maybe we should build some casinos at the site of the World Trade Center,” he said. “That would create some jobs right? Heck, that would help the tax base, right?”

Michaan’s closes 3rd quarter with art and antiques for all Sept. 5