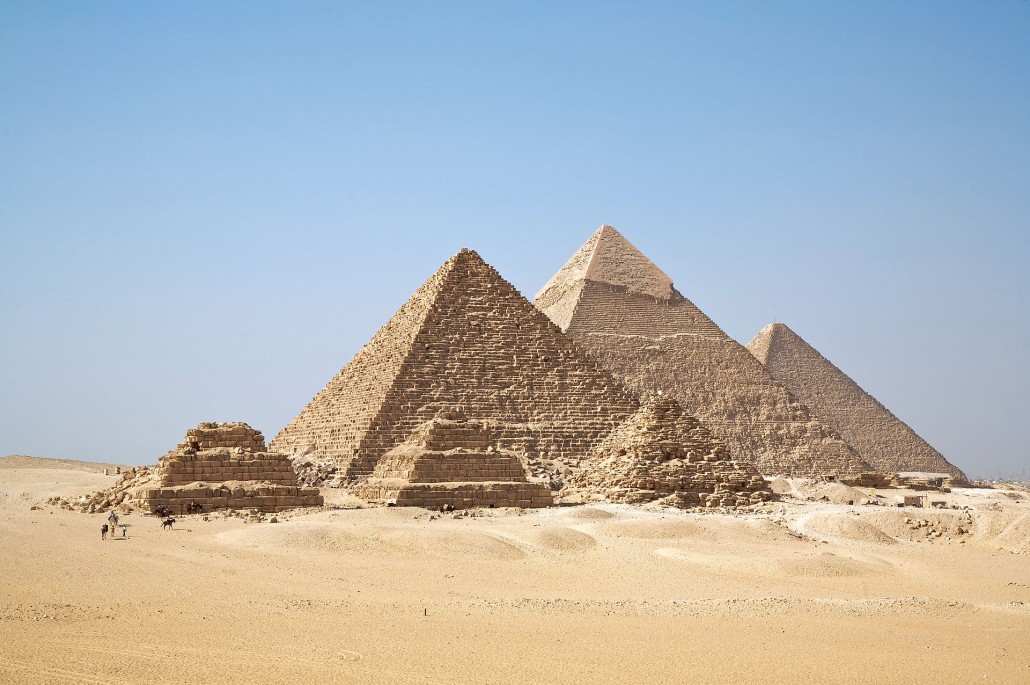 All of the six pyramids of the Giza Necropolis, where the Grand Egyptian Museum, was intended to open this year. Image by Ricardo Liberato. This file is licensed under the Creative Commons Attribution-Share Alike 2.0 Generic license.

CAIRO (AP) – For more than a decade, he was the self-styled Indiana Jones of Egypt, presiding over its antiquities and striding through temples and tombs as the star of TV documentaries that made him an international celebrity.

But four years after the uprising that toppled President Hosni Mubarak and nearly ended his own career, Zahi Hawass can be found in a cramped Cairo office, lamenting the state of the antiquities bureaucracy he once ruled like a pharaoh and dreaming of a new museum whose fate lies in limbo.

His trademark wide-brimmed hat and safari vest may be hung up for now, but he is brimming with ideas on how to revive Egypt’s antiquities and bring back tourists after years of unrest.

A long-planned new facility out by the pyramids, called the Grand Egyptian Museum, was intended to open this year, but the government says it is short the one billion dollars needed to complete the project.

“Government routine cannot work for museums,” Hawass said in an interview in his office, asserting that state bureaucracy is one of the main reasons the current Egyptian Museum has fallen into disrepair. For the new museum, “the directorship, the curatorship, it can be from America, from Germany, from England, from any place in the world. You need this museum to be international.”

As to the challenge of moving artifacts from the current museum in downtown Cairo over bumpy roads to the site of the new facility on the city’s outskirts, Hawass says “any TV channel” would pick up the tab in return for exclusive rights to document the artifacts’ restoration and transport. “They will run in competition to do this,” he said.

Hawass knows TV. He was once a staple on the Discovery Channel and had his own reality show on the History Channel called Chasing Mummies, the promo for which introduced him by saying “100,000 years of history belong to one man … Only he holds the key to the world’s greatest ruins.”

The productions earned him droves of fans abroad but led to accusations of grandstanding in Egypt, where he was seen by many as a self-promoter who mistreated subordinates and abused his position for personal gain. He lost his job as head of antiquities after the 2011 uprising and faced corruption charges, of which he was later cleared.

But his swashbuckling antics gave a boost to Egyptian archaeology, with fundraising efforts and international tours of King Tut artifacts generating tens of millions of dollars.

His name is still associated with many of Egypt’s most famous digs, including grand discoveries such as the Valley of the Golden Mummies in Bahariya Oasis in 1999 and the mummy of Queen Hatshepsut almost a decade later. He has long campaigned to bring home ancient artifacts spirited out of Egypt during colonial times, and once said he had managed to recover 5,000 pieces.

Zahi was an outspoken supporter of his longtime patron Mubarak, and has praised President Abdel-Fattah el-Sissi, who led the military overthrow of an Islamist president in 2013 and was elected last year. But that support has not translated into an official role other than promotional work for tourism in Egypt.

Asked about the state of antiquities today, Hawass says things have improved over the last year, carefully avoiding direct criticism of anyone in particular. But he points out that there is still theft, mismanagement and corruption – noting two incidents in recent months in which artifacts were found to have been replaced with replicas.

“This did not happen before,” he said, adding that in order to prevent such abuses, “we need to restore the people before we restore antiquities,” by boosting employees’ salaries and providing them with health insurance.

Hawass insisted during the interview that he is focused on writing and has no desire to return to his previous position as head of the country’s antiquities. “People come here every day and ask me to come back … I think I did my duty, and it’s time for me now to publish all that I discovered.”

But at the glitzy launch of his latest book earlier this month at a ceremony at a five-star hotel attended by hundreds of Cairo’s elite, he was less guarded about possible ambitions to return.

“Maybe,” he said, as a torrent of fans pressed to take photos next to him.