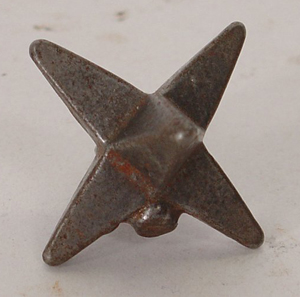 VALENCIA, Pa. (AP) – Finding an antique military anti-personnel weapon in the ground at your business is an exciting prospect. If you happen to be a military historian, that discovery is absolutely thrilling.

Paul Starr III, purchasing agent at H.P. Starr Lumber on Route 8, said employee Tim Leitem approached him holding a muddy item that resembled a jack like the ones children snatch up after bouncing a rubber ball. Only this item was much larger than a toy jack.

“As soon as I saw it, I knew what it was,” said Starr, who is a military historian.

The six-pointed item found by Leitem as he moved inventory around on the lumberyard property is a caltrop, Starr said.

He explained caltrops were thrown by the military onto roads where enemy troops were expected to march. No matter how they fell, at least one of the weapon’s points would pierce the soft spot on a horse’s hoof.

“If a horse stepped on it, it would go lame and have to be put down,” Starr said.

A caltrop could also pierce a soldier’s boot, hobbling him and possibly causing a life-threatening infection.

Starr said the cruel weapons have been used for more than 1,000 years.

He estimates the caltrop found on the Starr property is from the late 18th century, and was made by a blacksmith.

Starr wonders if the caltrop was deployed along what is now Route 8 during the Whiskey Rebellion of 1791-1794.

He explained that after the Revolutionary War, veteran and Treasury Secretary Alexander Hamilton forced farmers to pay a significant tax on their grain to repay debt accumulated during the war.

The farmers felt the act constituted taxation without representation, and rebelled against it.

The rebellion climaxed in 1794, when Washington sent U.S. marshals to collect the tax and 500 men attacked the home of an Allegheny County tax collector.

Starr said 12 soldiers, four rebels and two civilians were killed during the insurrection, which was named the Whiskey Rebellion because the grain being taxed was used in part to make whiskey.

Starr said he can picture caltrops being tossed by the rebels onto the road to hurt the government forces arriving to collect the tax.

He said a house on the H.P. Starr property is from the Revolutionary War era, and served as a stagecoach stop, hotel and tavern over the years. It could have housed rebels participating in the Whiskey Rebellion.

“If this house could talk, Lord only knows the stories it would tell,” Starr said.

However, Andrew Gaerte, the educational manager at the Fort Pitt Museum in Pittsburgh, doubts the caltrop found at the Starr property was deployed by a participant in the Whiskey Rebellion.

He said caltrops are normally only found near forts or roads where troops were known to march.

Also, Gaerte said the only reference to the use of caltrops in the area he has seen was a 250-year-old account in which officers desperate to defend Fort Pitt set up bear traps and caltrops around the fort.

The latter, Gaerte said, were meant to pierce the moccasins of Native Americans looking to invade the fort.

Gaerte was interested to hear that a Revolutionary War-era house is on the Starr property, and suggests that may be the reason the device was found there.

“It could have been a curiosity brought back home by a soldier or something like that,” Gaerte said.

Regardless of its origin, Starr remains ecstatic about the antique weapon, which he plans to display in his home.

“To me, that caltrop was a real find,” he said. 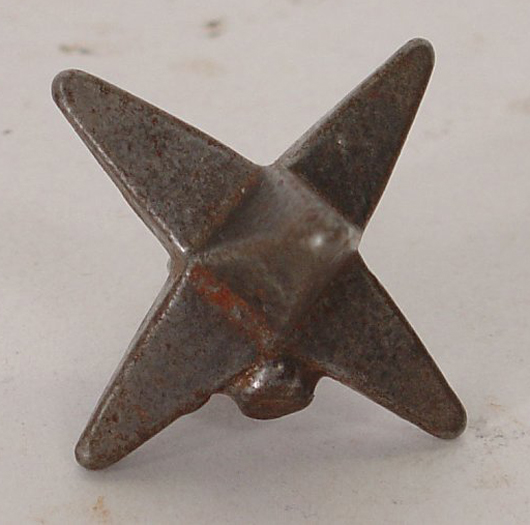