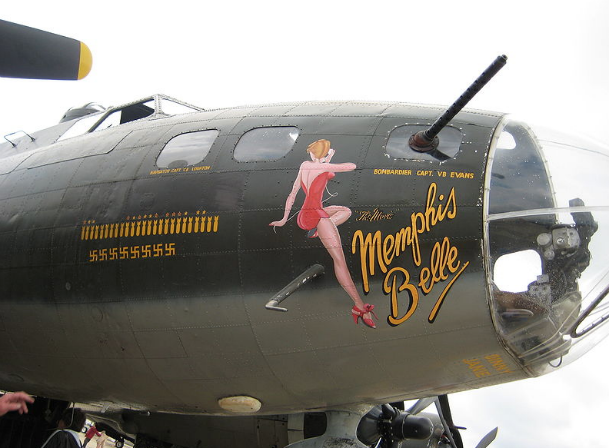 A reconstruction of the Memphis Belle used in the 1990 film of the same name was on view at Andrews Air Force Base in 2008. Photo by Manassehkatz, licensed under the Creative Commons Attribution-Share Alike 3.0 Unported license

DAYTON, Ohio (AP) – The Memphis Belle took off from England on the morning of May 17, 1943, with a wave of 159 B-17s to drop bombs on the concrete Nazi submarine shelters at Lorient, France. When it landed unscathed that afternoon, the 10 men aboard already were celebrating; they had just become one of the first bomber crews of the war to survive 25 missions at a time when most weren’t making a dozen.

On Thursday, the 75th anniversary of that final mission, the lovingly restored Memphis Belle, with the leggy, swimsuit-clad pinup girl freshly repainted on the nose, will be unveiled at the National Museum of the U.S. Air Force near Dayton.

The public opening of the exhibit in the World War II Gallery represents more than a dozen years and 55,000 hours of fastidious work by staffers and volunteers to renew one of most celebrated planes of the war.

“I hope I don’t break down and start bawling, but that’s a possibility,” said Dr. Harry Friedman, the Memphis neurosurgeon who has worked for decades to have the plane restored and displayed.

Jeff Duford, who oversaw the project at the museum, equates the cultural significance of the Memphis Belle with that of the Iwo Jima flag and the USS Arizona in Pearl Harbor.

The restored plane, he said, stands as a monument to the thousands of men who served on the heavy bombers that helped cripple the Nazi war industry.

“There are lots of things reported in the media that are famous but not important,” Duford said. “The most important element of the Memphis Belle is that it is an American icon. It’s one of those touchstones in our history that reflects who we are and some of the best of what we are.”

Battling Nazi fighters and flying through anti-aircraft bursts for six miserable months in 1942-43, the men who served on the Memphis Belle beat the odds just by surviving the requisite 25 trips. Two out of three young men – their average age was 20 – who flew on those B-17 missions did not come back.

“We were lucky, and we know that well,” Memphis Belle pilot Robert Morgan said after returning to the States. “There were other crews that did things that make what we did seem small in comparison.”

Contrary to legend, neither the Memphis Belle nor its crew was the first to complete 25 missions in the war. At least one other bomber crew in England did it first.

The Belle just happened to be the one made famous, thanks to newspaper reporters eager to lionize some war heroes, and to Hollywood director William Wyler, who decided to build a documentary around the 25th mission.

Wyler was taken by the plane’s sexy nose art and romantic moniker inspired by Morgan’s 20-year-old sweetheart in Tennessee.

Army public relations seized the moment and sent the Memphis Belle and most of the original crew back home on a barnstorming swing in the summer of 1943. The highly publicized 32-city war bond tour made celebrities of the crew, along with Morgan’s sweetheart, Margaret Polk, and a black Scotty puppy named Stuka who accompanied the crew.

(The relationship between Polk and the rakish Morgan didn’t last through the summer, but she would be closely associated with the airplane until her death in 1990.)

That tour, incidentally, included a stop at the same Ohio Air Force base – now called Wright-Patterson – where the Memphis Belle will now reside permanently.

Wyler’s film, Memphis Belle: A Story of a Flying Fortress, packed with enthralling air combat footage reached theaters in 1944 and built on the plane’s mystique. A 1990 hit movie that was a fictionalized account of the final mission introduced it to a new audience.

The bomber was rescued from an Oklahoma scrapyard after the war, purchased by the mayor of Memphis for $350 and displayed outdoors there for decades, deteriorating from weather and vandalism. After years of local efforts to properly exhibit it ran out of money and steam, the plane was trucked to Dayton in corroded pieces in October 2005.

Coincidentally, the only surviving member of the crew, radio operator Robert Hanson, died the same month.