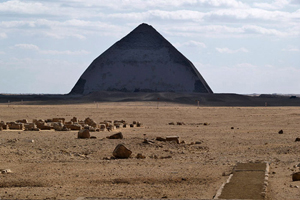 DAHSHOUR, Egypt (AP) – In this more than 4,500-year-old pharaonic necropolis, Egypt’s modern rituals of the dead are starting to encroach on its ancient ones. Steamrollers flatten the desert sand, and trucks haul in bricks as villagers build rows of tombs in a new cemetery nearly up to the feet of Egypt’s first pyramids and one of its oldest temples.

The illegal expansion of a local cemetery has alarmed antiquities experts, who warn the construction endangers the ancient, largely unexplored complex of Dahshour, where pharaoh Sneferu experimented with the first true, smooth-sided pyramids that his son Khufu – better known as Cheops – later took to new heights at the more famous Giza Plateau nearby.

The encroachment also reflects the turmoil of today’s Egypt, two years after the uprising that toppled autocrat Hosni Mubarak.

Police, still in disarray since the revolution, do nothing to enforce regulations. Fired up by the sense of rebellion against authority, Egyptians feel little fear of taking what they want, sometimes to redress neglect or corruption by authorities, sometimes just for personal gain. Also, as the new Islamist rulers and their opponents struggle over the country’s identity, experts fear Egypt’s ancient monuments, which hard-liners see as pagan, could pay the price in neglect.

In the case of Dahshour, villagers say their cemeteries are full and authorities don’t give permits or land for new ones. So they took matters into their own hands and grabbed what they insist is empty desert to erect family tombs.

“The dearest thing for us is burying our dead,” said Mohammed Abdel-Qader, a resident of nearby Manshiet Dahshour. “This land here is wide and flat, it’s a valley. Where are the antiquities they talk about? … We have no antiquities here.”

The problem is not just at Dahshour. An explosion of illegal building the past two years is endangering Egypt’s ancient treasures around the country, authorities say. Locals living next to some of most beloved pharaonic sites – including the famed Giza Pyramids outside Cairo – are seizing land, building homes, laying farmland or selling off parcels, said Mohammed Youssef, head of antiquities for Dahshour.

At the same time, looting has become more brazen in many places. Just a few weeks ago, several guards at Dahshour were shot and wounded when they confronted thieves doing an illegal dig during the night, he said.

The cemetery expansion is the most dangerous encroachment yet because of how close it comes to the Dahshour monuments, which are on the UNESCO World Heritage site list, Youssef said. Moreover, Dahshour is largely unexcavated, since the area was a closed military zone until 1996. What remains buried is believed to be a treasure trove shedding light on the largely unknown early dynasties.

“When you build something over archaeological site, you change everything. We can’t dig in and know what is inside,” Youssef told The Associated Press. “This is the only virgin site in all of Egypt.”

The area is part of the vast Memphis necropolis where pharaohs built their monumental funeral complexes stretching south from Giza in the desert along the Nile Valley.

The construction started suddenly about two weeks ago, apparently when one villager added a new tomb in the desert on the edge of an existing cemetery, guards and residents said. Word went out and hundreds of residents from at least four neighboring villages descended on the site to build tombs of their own, up a small desert valley.

Police did nothing to stop them – nor did the military, still stationed nearby.

The tombs are small complexes on their own, built mainly of cheap white bricks. Each is a walled courtyard with multiple enclosed niches where multiple family members can be buried.

Rows of them now cover several acres inside the UNESCO-defined antiquities zone of Dahshour, coming to within 150 meters of Sneferu’s Valley Temple. The site is the first known such valley temple, which later each pharaoh would build in connection with his pyramid.

Adjacent to the construction is the crumbled 3,800-year-old Black Pyramid of Amenemhat III, an area that has faced heavy looting over the past two years. Just beyond towers Sneferu’s Bent Pyramid, dating some 700 years earlier, with its distinctive bent sides believed to have been caused when the builders had to correct a too-steep angle of ascent half-way through construction. Farther away is the Red Pyramid, in which Sneferu’s builders got the job right, producing the first smooth-sided pyramid, evolving from the stepped structures built by earlier dynasties.

The state minister of antiquities Mohammed Ibrahim said in a statement Monday that an order had been issued to remove the construction and the Interior Ministry, in charge of police, had been asked to carry it out. “The financial resources of the ministry are not enough” to protect the sites, it said.

The question is whether it will be implemented. Younes said the military would have to get involved since police have refused to act. He said past requests for orders to remove illegal construction at archaeological sites had been ignored. “There is no deterrent,” he said.

He also worries that the rise of Islamists to power brings a dismissive attitude to pre-Islamic antiquities.

He pointed out that pharaonic treasures – a key part of the country’s identity – are mentioned in the Islamist-drafted constitution only as “an afterthought,” just in terms of maintaining sites. In fact, the constitution doesn’t refer directly to pharaonic sites or Egypt’s ancient civilization at all, making only a vague reference to “heritage.”

Some at the construction site said they were sure Islamist President Mohammed Morsi won’t order the removal of the modern cemetery because he was a believer and respects Islam’s ways.

Authorities may be wary of forcibly removing the construction and risking a clash with the villagers, who say they won’t go unless they are given a new site nearby and compensation for what they have already built.

Ehab Eddin el-Haddad, one resident building a burial plot, said removing the tombs would require “killing these people, and it would mean a return to the old regime … it would be the return of repression.” Nearby, workers slapped together bricks for a new wall and a heavy machine flattened the earth for construction.

The villagers come from a string of nearby farming communities crammed amid the palm groves in the narrow, verdant strip of the Nile Valley, where land is limited as Egypt’s population of 85 million swells. Residents said they were desperate for new space for burial plots, pointing to old family tombs they said were full. Authorities balked at issuing permits for new tombs or demanded exorbitant fees and bribes, several residents said.

“What can people do with their dead? They can’t throw them in the canal,” said Ali Orabi, a local farmer. “There is death and there is birth, these things don’t stop … You dignify the dead by burying them.”

El-Haddad said nearby land had been set aside to expand the cemetery but after the revolution it was seized by armed local “thugs” who started building houses on it and selling off plots, a common problem with Egypt’s new lawlessness.

Like many others, he resented the authorities’ concern over antiquities and tourism that the villagers say benefit only rich Egyptians, corrupt officials and foreign archaeologists, with no gains for the poor.

“Where is the gold that came out of this land? All smuggled out,” said el-Haddad. “I’m not waiting for some half-naked foreigner to come take out what she finds in the cemeteries. What do I get out of it? … I want a place to be buried in.”

Antiquities theft is believed to be big business in Egypt, fueled by postrevolution chaos, and press reports often accuse local officials of involvement, though few cases have gone to court.

The fear is that looters could also use the construction as cover, even if the villagers are acting out of a legitimate need for land, said Monica Hanna, an independent archaeologist who has worked at Dahshour. Hills nearby are dotted by pits from digs by thieves searching for treasure, mostly from last year.

In the area in general, “there has been more looting than scientific excavation,” Hanna said.

Saleh Mohammed Shafei, a 77-year-old villager, acknowledged that “there are people who come and dig at night” – but said those like him who are building tombs had nothing to do with the thieves.

“Where else would people go” with their dead, he said. “These people are building because they’re forced to. These old tombs are filled, some three layers deep.” 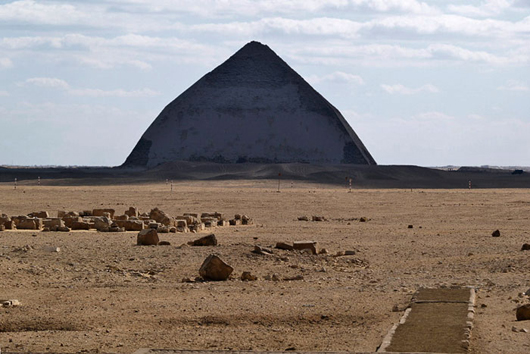