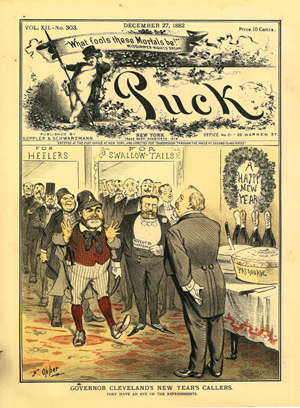 Cover of ‘Puck’ magazine, Dec. 27, 1882, with a caricature of Governor-elect Grover Cleveland hosting a party for wealthy supporters who were about to receive office appointments and other perks in return for their help in getting him elected. New York State Library Collection.

ALBANY, N.Y. (AP) — New York’s Capitol has been the workplace of future presidents, Supreme Court justices, premier thinkers and even scoundrels. Now the statehouse is telling some of its long-hidden tales by filling its hallways with artifacts that are drawing thousands of visitors.

The newly displayed pieces of Americana include a 1762 slave bill of sale, early abolitionist decrees, Gov. Nelson Rockefeller’s massively stretched Lincoln Continental from the “Mad Men” era, and a curious chunk of old iron: A 3-foot link from Gen. George Washington’s defense system, which strung a quarter-mile chain across the Hudson River at West Point to stop British ships during the Revolutionary War.

In less than a year, marble halls that for most of their 130 years had been used simply as routes between offices have been transformed into a museum. Every few steps, slices of American and state history give even veterans of these hallways pause.

It’s a fitting new role for the cavernous Capitol, which has hosted many presidents and other important figures — including at least one after death. A marker shows President Ulysses S. Grant’s body was viewed in state after he died in upstate New York.

For decades, most of the artifacts were boxed in a warehouse in neighboring Schenectady County or stored in climate-controlled cabinets in the state Archives. But in the last year, New York has raided its attic.

Now the eclectic collection is on display. The artifacts include an iron dumbbell-like device shot from cannons in the days of tall ships, a 1966 Harley-Davidson motorcycle used by state police, Benedict Arnold’s treason papers and documents related to important programs created by Govs. Theodore and Franklin Roosevelt before they became presidents. There also items from key moments in the women’s rights and labor movements.

The artifacts can be seen in regular tours of the Capitol or, as thousands of visitors are increasingly doing, by wandering through the working statehouse. Detailed signs are augmented by audio explanations that can be heard by cellphone.

“It’s really beautiful, from the classic cars to the Assembly hall,” said Deepak Dhungana, 38, of Sidney, Australia, who was visiting family in Albany. “There’s a sense of freedom. You can go anywhere.”

He and his family were admiring a 1924 Ford truck, the first model the company offered with an open pickup truck design. Behind them, on the underground concourse of the Empire State Plaza that connects to the Capitol, was a long, blue 1931 Pierce-Arrow limousine. Also lining the halls is a longtime permanent exhibit that art historians have called the greatest collection of modern art outside a museum, all collected by Rockefeller.

Gov. Andrew Cuomo ordered the dusting off of these items. He wants New York’s rich history to remind Americans of the Empire State’s critical role in the past and to inspire New Yorkers to cut a similar path for the future.

The free exhibit is intended to reveal history, unvarnished and directly. The 1799 act to end slavery in New York, for example, shows the complicated politics surrounding abolition, even in New York. The display shows slavery was ended only gradually, with time for masters to keep slaves for years afterward. In an early example of political spin, slaves born before July 4, 1799, weren’t free but were legally redefined as indentured servants.

Other items on display include ceremonial trowels used by Gov. Franklin Roosevelt, who favored the small hand tools that could be used from a sitting position instead of the traditional ceremonial shovels. It was one of many ways Roosevelt and those around him masked his polio. Even the Capitol building kept his secret, from a tiny, private elevator to a secret door built into the ornate Red Room so he could welcome visitors while already seated.

“For decades, these treasures from our state’s rich history have been locked away and, at times, tragically forgotten,” said Cuomo, who recently hung the portrait of his father, former Gov. Mario Cuomo, in the revamped Hall of Governors. 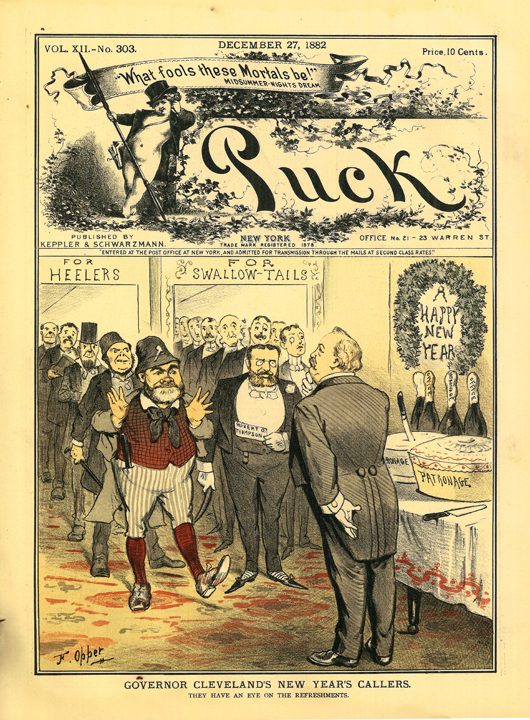 Cover of ‘Puck’ magazine, Dec. 27, 1882, with a caricature of Governor-elect Grover Cleveland hosting a party for wealthy supporters who were about to receive office appointments and other perks in return for their help in getting him elected. New York State Library Collection. 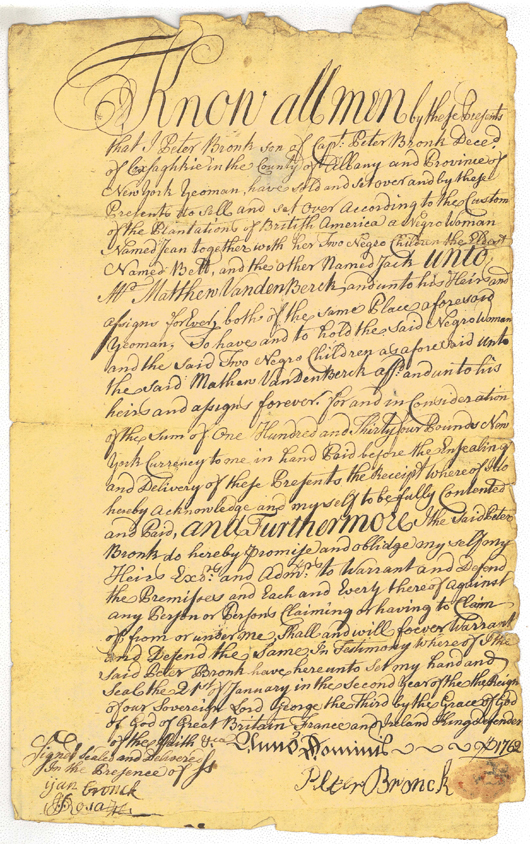 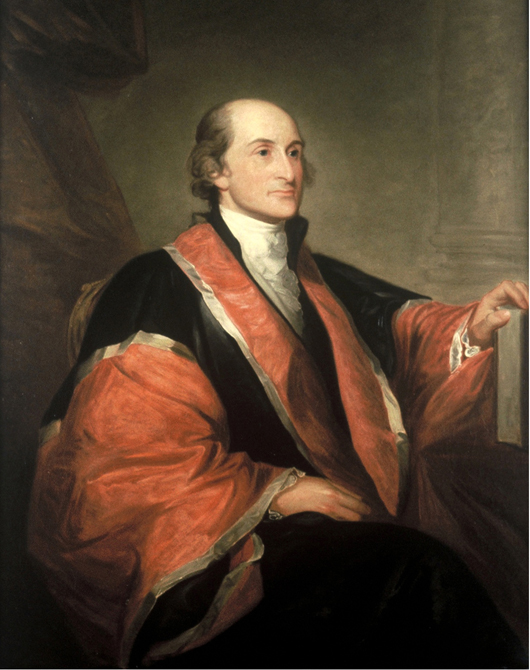 Painting of John Jay (1745-1829), a Founding Father of the United Stated who served as the first Chief Justice of the United States Supreme Court and negotiated the Jay Treaty of 1794, which settled major grievances with Great Britain and promoted commercial prosperity. The portrait is displayed in the New York State Hall of Governors in Albany.