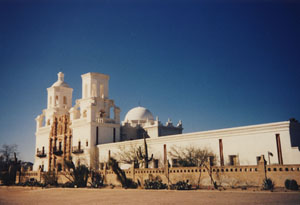 Mission San Xavier del Bac is named for the pioneering Christian missionary and founder of the Society of Jesus. The mission is located about 10 miles south of downtown Tucson.

“I’m sure in 1791 when the thing was finished somebody gave a tour, but this is the first scheduled, docent-led tour,” said Vern Lamplot, executive director of Patronato San Xavier, the group organizing the tours.

Travel and bus companies have taken groups through the mission for years, but they had no official connection to San Xavier.

“I’ve been at the church … when some of these guides show up, and I don’t really recognize what they’re talking about. They’re saying things I’ve never heard before,” Lamplot said. “We wanted to be able to give people a set of good, factual information about the place. Also, it’s my belief, if we’re going to preserve it in the future, people need to be aware of its cultural and historical importance.”

The free, 45-minute tours are led by about 20 volunteer docents with Patronato San Xavier, a nonsectarian, nonprofit group dedicated to the restoration, maintenance and preservation of the mission. They are held several times each day, except Sundays, to garner interest in preserving the White Dove of the Desert.

“We all do a slightly different one—my interest is history,” said docent Muriel Keegan-Glover, who led Saturday’s 11:30 a.m. tour, pointing out oddities and historical facts.

There’s the cat and mouse carved on the outside wall.

And then there’s the devil who glares from a painting of The Last Supper on the mission’s inside western wall.

When she has students on the tour, Keegan-Glover always asks whether they can find the devil.

“I make sure there’s something for the kids, too,” she said.

The painting was completed by American Indians from what today is called the Tohono O’odham Nation.

The mission is located in the tribal village of Waik, and the tribe’s circular black and white “man in the maze” symbol is prevalent throughout the mission, which was founded by Jesuit priest and explorer Father Eusebio Francisco Kino.

“If you look at the symbol it says that you go through life, you take turns, you make choices and some are good and some are not. If you are fortunate at the end you find tranquility, which is the dot in the middle of the circle,” said Keegan-Glover, an 83-year-old native New Yorker who has been in Tucson for 17 years.

A self-described “compulsive reader,” she is also a docent for the Arizona Historical Society.

So far, she said, most people on her tours have been tourists from outside of Arizona, though she’d like to see more locals learn about the mission.

In 1700, Kino put down the foundations for a church at the village of Bac, on the Santa Cruz River near modern Tucson, to be named after his patron saint, St. Francis Xavier. 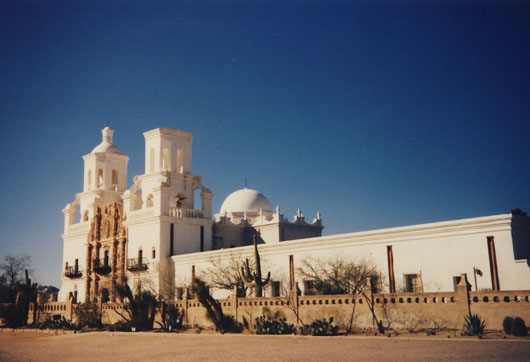 Mission San Xavier del Bac is named for the pioneering Christian missionary and founder of the Society of Jesus. The mission is located about 10 miles south of downtown Tucson.