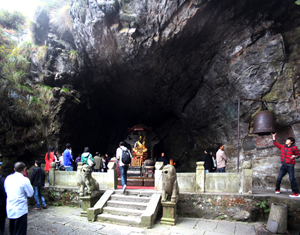 The 20,000-year-old pottery fragments were found in the Xianrendong Cave in Jiangxi Province. This file is licensed under the Creative Commons Attribution 3.0 Unported license.

BEIJING (AP) – Pottery fragments found in a south China cave have been confirmed to be 20,000 years old, making them the oldest known pottery in the world, archaeologists say.

The findings, which were published in the journal Science on Friday, add to recent efforts that have dated pottery piles in east Asia to more than 15,000 years ago, refuting conventional theories that the invention of pottery correlates to the period about 10,000 years ago when humans moved from being hunter-gathers to farmers.

The research by a team of Chinese and American scientists also pushes the emergence of pottery back to the last ice age, which might provide new explanations for the creation of pottery, said Gideon Shelach, chair of the Louis Frieberg Center for East Asian Studies at The Hebrew University in Israel.

“The focus of research has to change,” Shelach, who is not involved in the research project in China, said by telephone.

In an accompanying Science article, Shelach wrote that such research efforts “are fundamental for a better understanding of socio-economic change (25,000 to 19,000 years ago) and the development that led to the emergency of sedentary agricultural societies.”

He said the disconnection between pottery and agriculture as shown in east Asia might shed light on specifics of human development in the region.

Wu Xiaohong, professor of archaeology and museology at Peking University and the lead author of the Science article that details the radiocarbon dating efforts, told The Associated Press that her team was eager to build on the research.

“We are very excited about the findings. The paper is the result of efforts done by generations of scholars,” Wu said. “Now we can explore why there was pottery in that particular time, what were the uses of the vessels, and what role they played in the survival of human beings.”

The ancient fragments were discovered in the Xianrendong cave in south China’s Jiangxi province, which was excavated in the 1960s and again in the 1990s, according to the journal article.

Wu, a chemist by training, said some researchers had estimated that the pieces could be 20,000 years old, but that there were doubts.

“We thought it would be impossible because the conventional theory was that pottery was invented after the transition to agriculture that allowed for human settlement.”

But by 2009, the team—which includes experts from Harvard and Boston universities—was able to calculate the age of the pottery fragments with such precision that the scientists were comfortable with their findings, Wu said.

“The key was to ensure the samples we used to date were indeed from the same period of the pottery fragments,” she said.

That became possible when the team was able to determine the sediments in the cave were accumulated gradually without disruption that might have altered the time sequence, she said.

Scientists took samples, such as bones and charcoal, from above and below the ancient fragments in the dating process, Wu said.

“This way, we can determine with precision the age of the fragments, and our results can be recognized by peers,” Wu said.

Shelach said he found the process done by Wu’s team to be meticulous and that the cave had been well protected throughout the research.

The same team in 2009 published an article in the Proceedings of the National Academy of Sciences, in which they determined the pottery fragments found in south China’s Hunan province to be 18,000 years old, Wu said.

“The difference of 2,000 years might not be significant in itself, but we always like to trace everything to its earliest possible time,” Wu said. “The age and location of pottery fragments help us set up a framework to understand the dissemination of the artifacts and the development of human civilization.” 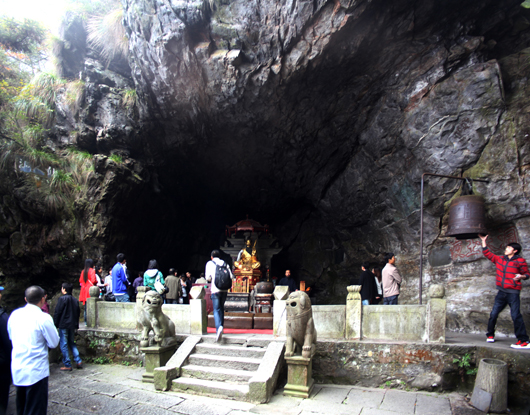 The 20,000-year-old pottery fragments were found in the Xianrendong Cave in Jiangxi Province. This file is licensed under the Creative Commons Attribution 3.0 Unported license.