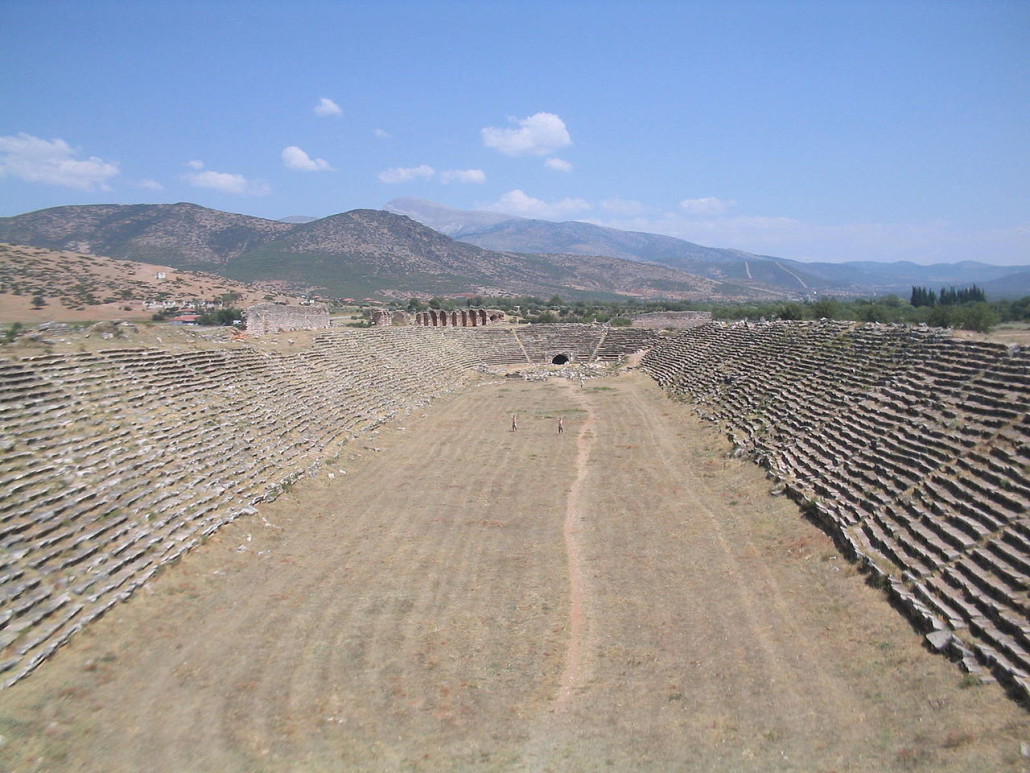 Hippodrome in the ancient city of Aphrodisias, Turkey. Dpalma01. This file is licensed under the Creative Commons Attribution-Share Alike 3.0 Unported license.

NICOSIA, Cyprus (AP) – A mosaic floor dating to the fourth century and depicting scenes from a chariot race in the hippodrome has been uncovered, the only one of its kind in Cyprus and one of only a handful in the world, a Cypriot archaeologist said Wednesday.

Cyprus Antiquities Department archaeologist Fryni Hadjichristofi told the Associated Press that out of the many hundreds of ancient mosaic floors discovered around the world, only around seven depict similar chariot races at the hippodrome. What distinguishes this mosaic is its ornate detail and the fact that it depicts complete scenes from race in which four chariots, each with a team of four horses, are competing. This may be representative of different factions in competition with each other in ancient Rome.

“The hippodrome was very important in ancient Roman times, it was the place where the emperor appeared to his people and projected his power,” said Hadjichristofi.

The mosaic is 11 meters long and four meters wide (36 by 13 feet) but hasn’t been fully uncovered yet. It’s possibly part of a villa that may have belonged to a wealthy individual or nobleman when Cyprus was under Roman rule. The mosaic, about 30 kilometers (19 miles) west of the capital Nicosia, also sheds new light on the ancient past of the island’s interior, about which little is known.

Most of the important ancient finds on the island are located near the coasts, where cities and towns flourished in antiquity. The earliest village found in Cyprus dates as far back as the 10th millennium B.C.

A small piece of the mosaic was first discovered by an area farmer tilling his land in 1938. Authorities marked the area, but full-fledged digs didn’t proceed until almost 80 years later because of work at many other sites the Antiquities Department had prioritized, said Hadjichristofi.

Hadjichristofi said the area, abutting a river, has long been known for its fertile ground and bountiful orchards.

Cyprus had been a wealthy island in antiquity, producing copper – from where according to a prominent theory the island got its name – timber from its then-ample forests as well as pottery, many examples of which have been found in neighboring countries, said Hadjichristofi.

“We know that Cyprus was once wealthy, the latest discoveries confirm this,” she said.