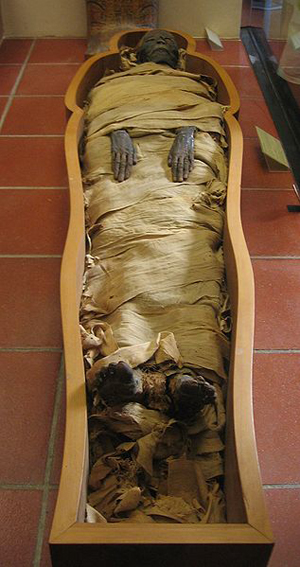 Mummy at The Vatican, photographed Dec. 18, 2006 by Joshua Sherurcij.

LITTLE ROCK, Ark. (AP) – The tightly wrapped fabric that holds the mummified remains of Hetep-Bastet contain indications of what may have killed her 2,500 years ago. The sarcophagus that served as her vessel bears the scars of more recent history.

The mummy, on display at the “World of the Pharaohs” exhibition in Little Rock that opens Friday, is on loan from University of Quebec at Montreal, where the coffin was damaged in a student protest in 1969.

A CT scan of the mummy taken last year revealed that Hetep-Bastet had abscessed teeth and a broken femur and hip, which may have become infected and caused or contributed to her death. There are conflicting estimates of her age, from about 40 to about 60.

Hetep-Bastet’s tooth problems came as no surprise to Egyptologist and mummy expert Bob Brier. During a walk through the exhibit Wednesday, Brier noted grain of the time contained bits of the stone used to grind it, along with sand that blew in, and wore down teeth. With the tooth pulp exposed, people were at great risk of dangerous infections.

“That was a common cause of death,” said Brier, the author of The Murder of Tutankhamen and other books on ancient Egypt.

The exhibition has two mummies, the other of which is from the Roman period and shows evidence of the diminished skills among craftsmen who weren’t valued by the western rulers. The coarsely drawn figures on its coffin don’t have the correct animal images and some are mislabeled.

The coffin of Hetep-Bastet, dating to between 644 and 525 B.C., is much more skillfully painted, showing gold and red and earth tones. Brier noted that she is depicted on a funeral couch with four canopic jars underneath, where her organs would be stored so she could use them in the afterlife. Anubis, the jackal-headed god of embalming, stands over her.

Much of the exhibit’s 200-plus items were found in tombs, collected by an archaeologist in the early 20th century working for Harvard University and the Museum of Fine Arts in Boston, which loaned the items for the show, except the mummies.

One of the first objects patrons will see is an upper fragment of a granite colossus of Ramses the Great.

Many scholars believe Ramses the Great, who built fabulous monuments in his 67-year reign, was the pharaoh during the Exodus of the Jews from Egypt.

“This is the only face from the Bible that you can ever see,” Brier said. “This is what the guy looked like when he was young.”

On the left rear is a hieroglyphic inscription with Ramses’ name and the image of a cobra with a solar disk.

Brier, who has studied images of Ramses II’s mummy, said the pharaoh had a sizable hole in his mandible, indicating he also had a terrible tooth infection.

“I think the pharaoh of the Exodus had a lot of pain,” Brier said.

The mummies are an important part of the exhibit, but the other human images carry an immediacy that can be more powerful than art from other cultures, Brier said.

“It’s super-realism,” he said. “It’s not two-dimensional, flat, like looking at Medieval paintings,” he said. “You’re looking across 2,000 years or more. It’s the realism, and that they’re so old.”

The Hetep-Bastet mummy was a gift in 1927 from the Cairo Museum of Antiquities to the precursor of the University of Quebec. Its rest was disturbed when the sarcophagus was knocked over during a protest against the university’s administration 40 years ago.

“The central part of the top of the coffin was split down the middle,” Lampo said. Another piece that broke off is in a separate display.

Some of the paint flaked from the casket, which conservators at the Canadian Museum of Civilization in Gatineau, Quebec, recently restored. Lampo said there were “many” tiny fragments that were meticulously fitted back in place. But museum patrons who look carefully will be able to see the white undercoat that was applied to the wood, which was then painted, and how bits could easily become dislodged in a jostling, he said.

The “World of the Pharaohs” exhibit runs through July 5, 2010. Adult admission is $22, though various discounts are available for groups, children, seniors and military.

Egyptian mummy getting a closer look in St. Louis