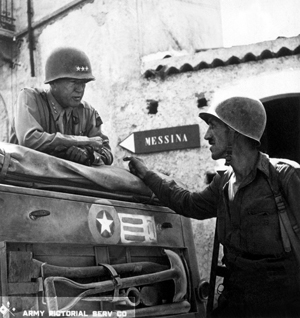 SAN MARINO, Calif. (AP) – During the final days of World War II, as American soldiers were returning from Germany with swastika-inscribed helmets, flags and other Nazi memorabilia, Gen. George Patton was packing up his own set of souvenirs.

On Wednesday, The Huntington Library, a sprawling complex of libraries, museums and botanical gardens in this leafy Los Angeles suburb, handed over the documents to the government-run National Archives, thus concluding a 65-year-old odyssey.

The papers, which among other things rescinded the citizenship of German Jews and forbid them to marry non-Jews, are the only original pieces of Nuremberg trial evidence missing from the collection, said National Archives spokeswoman Susan Cooper.

Holocaust scholars have described them as priceless, saying they provide an outline of the beginnings of a movement that led to the most atrocious act of genocide in history.

It hasn’t been lost on officials at The Huntington that Patton, a notorious war trophy collector, carried the papers out of Germany illegally.

“We were aware of the fact that General Patton, who had received the documents from his staff as a gift and deposited them at The Huntington, had not paid attention in his souvenir hunting to the orders of his commander in chief,” library President Steve S. Koblik said.

The papers should have gone to the U.S. government, which was collecting evidence to use in the Nazi war crimes trials that took place in Nuremberg shortly after the war. Prosecutors had to use photocopies instead.

“Had General Patton not taken these documents, they would have been part of the collection the government was putting together in order to prepare for the Nuremberg trials,” Koblik said.

Patton, instead, deposited the papers at The Huntington in 1945. The general grew up next door to the library and his father once worked for its namesake, railroad baron Henry Huntington.

The laws, which also forbade Jews from having sex with non-Jews, flying the German flag or hiring non-Jewish women to work in their homes, remained quietly filed away in a bombproof vault until 1999 when Huntington officials announced they had them.

After lending them for several years to Los Angeles’ Skirball Cultural Center – whose mission is to promote Jewish culture and heritage – The Huntington announced this week it was handing them over.

The time had come to take them off display, Koblik said, adding the papers’ fragility doesn’t allow they be exposed to light indefinitely.

“We’ve never made them an official part of the Huntington collection,” Koblik told The Associated Press on Tuesday. He said the nonprofit institution, known for such treasures as its priceless Gutenberg Bible and early editions of the works of Shakespeare and Chaucer, has very little material on 20th century Germany.

Although the laws didn’t directly call for the execution of Jews, they laid the groundwork for that, several scholars said, by marginalizing a group of people, turning them into second-class citizens.

“It’s important to our understanding of genocide that genocide is always a process,” said Stephen Smith, executive director of the University of Southern California’s Shoah Foundation Institute, which documents evidence of the Holocaust.

“That was not an order to murder the Jews, it was an order to exclude them from participation in society,” Smith said of the Nuremberg Laws. “Once you start excluding a group for whatever reason you are on the path to the ultimate exclusion.”

Arts and crafts school staying in Gatlinburg
Scroll to top