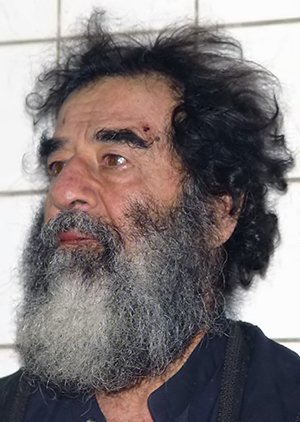 Saddam Hussein in a photo taken shortly after his capture. U.S. Military/Dept. of Defense photo, December 14, 2003.

WASHINGTON (AP) – A gold-laden sword looted from ousted Iraqi dictator Saddam Hussein’s personal office in the aftermath of the U.S. invasion of Iraq has been returned to Iraqi authorities.

The Homeland Security Department on Monday returned the 43-inch (110-centimeter) sword with an embellished blade and sheath with gold inlaid Arabic writing to the Iraqi ambassador. The sword was seized by the U.S. government in January 2012 after it was found for sale at an auction in Manchester, New Hampshire.

The auction company, which sold the sword for $15,000 before it was seized, said it was brought to the United States by an American combat historian. The department says the sword, a gift to Saddam, is not a modern battlefield weapon and could not be considered a war trophy.

Oil and politics stand in the way of preservation in Babylon

Handwritten poem by Poe sells for $300K at auction