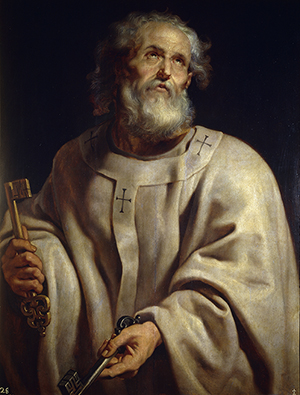 Sir Peter Paul Rubens (Dutch, 1577-1640) painting of St. Peter as Pope with the pallium and the Keys to Heaven. Painted between 1610-1612. From the permanent collection at The Prado in Madrid.

VATICAN CITY (AP) – The Vatican publicly unveiled a handful of bone fragments purportedly belonging to St. Peter on Sunday, reviving the scientific debate and tantalizing mystery over whether the relics found in a shoe box truly belong to the first pope.

The nine pieces of bone sat nestled like rings in a jewel box inside a bronze display case on the side of the altar during a Mass commemorating the end of the Vatican’s yearlong celebration of the Christian faith. It was the first time they had ever been exhibited in public.

Pope Francis prayed before the fragments at the start of Sunday’s service and then clutched the case in his arms for several minutes after his homily.

No pope has ever definitively declared the fragments to belong to the Apostle Peter, but Pope Paul VI in 1968 said fragments found in the necropolis under St. Peter’s Basilica were “identified in a way that we can consider convincing.”

Some archaeologists dispute the finding.

But last week, a top Vatican official, Archbishop Rino Fisichella, said it almost doesn’t matter if archaeologists one day definitively determine that the bones aren’t Peter’s, saying Christians have prayed at Peter’s tomb for two millennia and will continue to, regardless.

“It’s not as if pilgrims who go to the altar (of Peter’s tomb) think that in that moment in which they profess their faith that below them are the relics of Peter, or of another or another still,” he told reporters. “They go there to profess the faith.”

The relics were discovered during excavations begun under St. Peter’s Basilica in the years following the 1939 death of Pope Pius XI, who had asked to be buried in the grottoes where dozens of popes are buried, according to the 2012 book by veteran Vatican correspondent Bruno Bartoloni, “The Ears of the Vatican.”

During the excavations, archaeologists discovered a funerary monument with a casket built in honor of Peter and an engraving in Greek that read “Petros eni,” or “Peter is here.”

The scholar of Greek antiquities, Margherita Guarducci, who had deciphered the engraving continued to investigate and learned that one of the basilica workers had been given the remains found inside the casket and stored them in a shoe box kept in a cupboard. She reported her findings to Paul VI who later proclaimed that there was a “convincing” argument that the bones belonged to Peter.

Top Vatican Jesuits and other archaeologists strongly denied the claim, but had little recourse.

“No Pope had ever permitted an exhaustive study, partly because a 1,000-year-old curse attested by secret and apocalyptic documents, threatened anyone who disturbed the peace of Peter’s tomb with the worst possible misfortune,” Bartoloni wrote.

The Vatican newspaper, l’Osservatore Romano, published excerpts of the book last year, giving his account a degree of official sanction.

In 1971, Paul VI was given an urn containing the relics, which were kept inside the private papal chapel inside the Apostolic Palace and exhibited for the pope’s private veneration each June 29, for the feast of Sts. Peter and Paul. Sunday marked the first time they were shown in public. 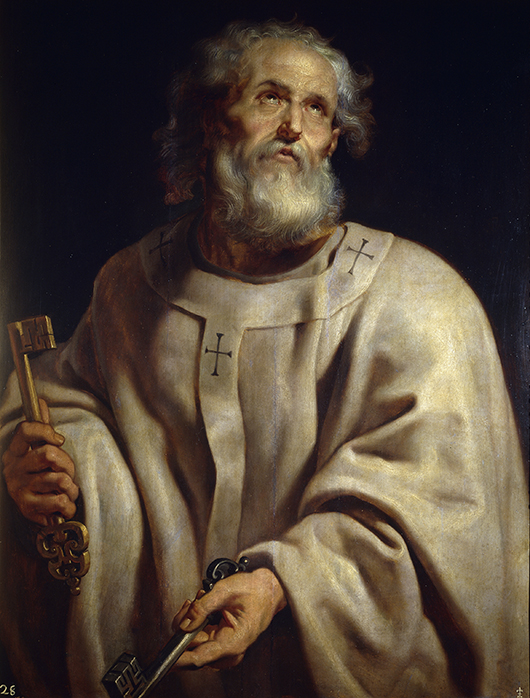 Sir Peter Paul Rubens (Dutch, 1577-1640) painting of St. Peter as Pope with the pallium and the Keys to Heaven. Painted between 1610-1612. From the permanent collection at The Prado in Madrid.