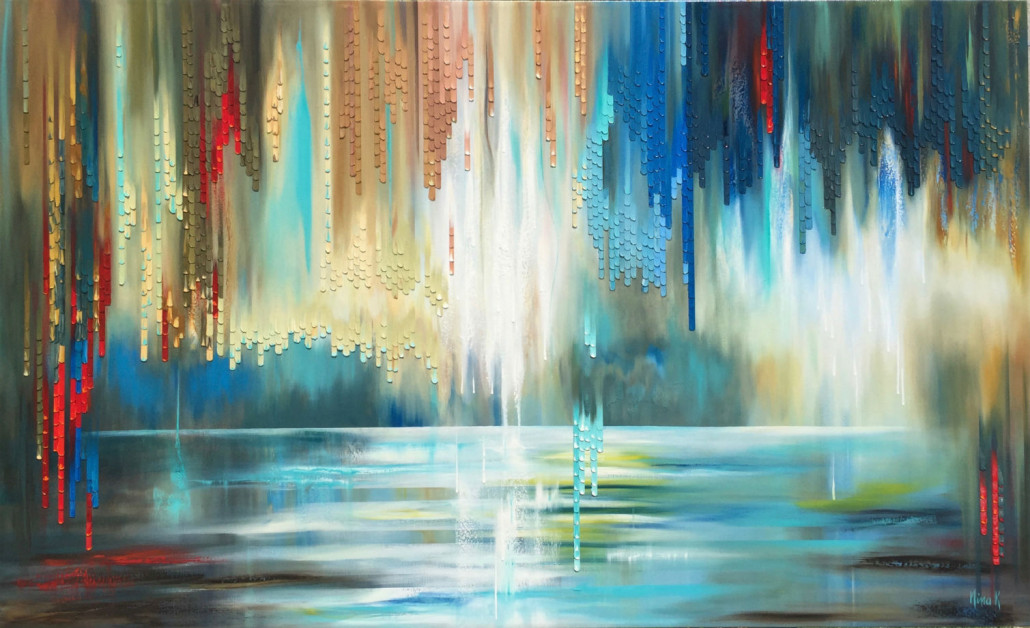 SAN DIEGO – New works from Southern California-based abstract expressionist painter Nina K will be exhibited as part of the ART San Diego at Balboa Park Activity Center 2145 Park Blvd. in San Diego, Nov. 3-6. These all new pieces are from her ongoing Pixel series, which she debuted early this year.

The new paintings being shown at ART San Diego are all oil on thick canvas and are created with palette knives applying thick layers of paint and blending with brushes. These will include; Spectrum, 68 x 54 inches, embracing a spectrum of colors found in nature, floating in space against the background of sea and sky; Celestial Rain, 44 x 72 inches, a water scene created by the artist’s own pixel technique; Rhapsody In Blue, 54 x 46 inches, a harmonious cascade; Mystic Falls, 54 x 46 inches, an abstract illusion of waterfalls against the background of geometric shapes; and Breathing Space, 48 x 72 inches, Nina K’s abstract expression of a seascape.

In recent years Nina K’s work has become  desirable with collectors throughout the U.S. and overseas, while she is represented by three different galleries in the Southern California area. In addition to her relationship with the Avran Art + Design Gallery in Laguna Beach, Calif., where she currently lives, she is also represented by the Coda Gallery in Palm Desert, Calif., and the Emerald C Gallery, in San Diego. Nina K has also exhibited at various juried art shows around the country, where her paintings sell very well. This past year alone she has sold 48 paintings at various prices, usually in the $5,000-$10,000 range.

She first developed a strong following of private collectors and design professionals in the Southwest region of the country, before her appeal broadened nationwide and beyond. 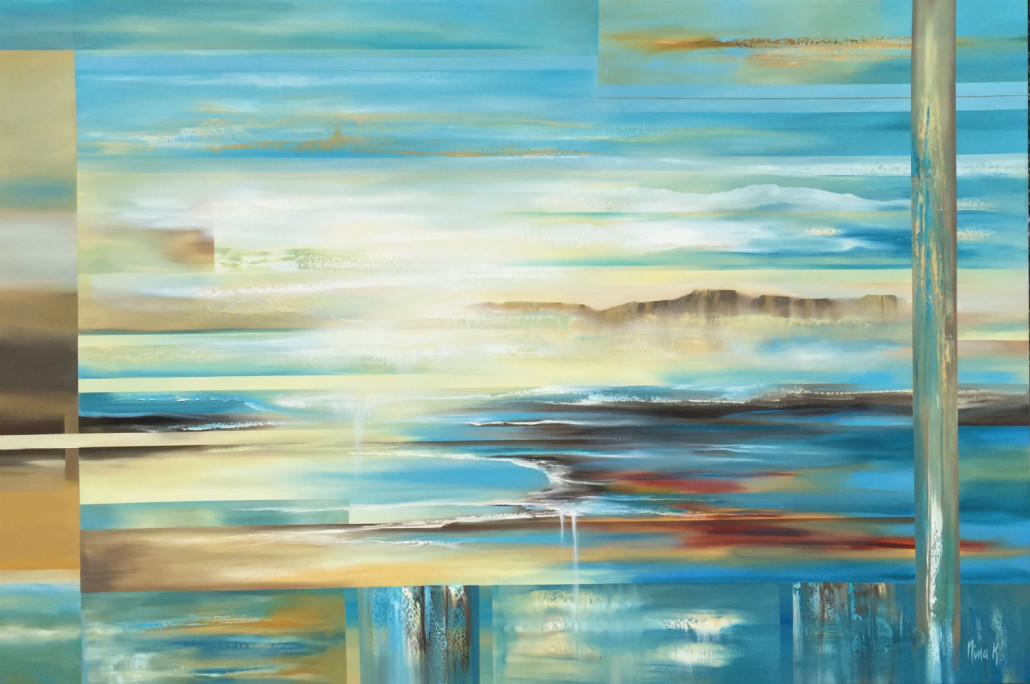 Her “Pixel” series of paintings, along with her other work, are all oil on canvas and have been described as “explosive”. Nina K’s developed signature technique incorporates applying heavy layers of paint with various palette knives in a cascade form. She’ll often mix several colors on her knife and drag it down to get a specific effect. When dry, she applies glazes and varnish which gives it a three dimensional effect and also a wet appearance. When the proper lighting hits the paintings, they give off a luminous effect.

Upon moving to the Los Angeles area in mid ’90s, Nina K focused her talent into creating art as a full-time career. She began painting large-scale abstract oils on canvas and soon found an audience for her work. Her art, including both the vibrant “Passion” series and the “Pixel” series, has since been successfully exhibited in numerous galleries and public settings, while also enhancing many private collections across the U.S. and abroad.