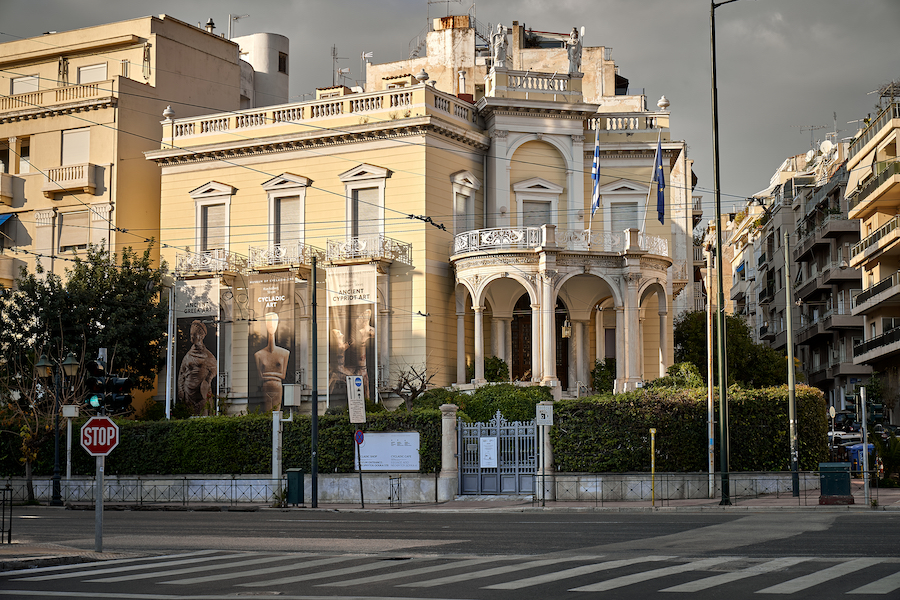 The Museum of Cycladic art in Athens, photographed in February 2021. On August 30, a spokesman for the Greek government announced a deal for the eventual return of 161 ancient Greek artifacts from a U.S. billionaire’s private collection, which will be exhibited at the Athens museum later in 2022. Image courtesy of Wikimedia Commons, photo credit George E. Koronaios. Shared under the Creative Commons Attribution-Share Alike 4.0 International license.

ATHENS, Greece (AP) – Greece has struck a complex deal for the eventual return from a U.S. billionaire’s private collection of 161 top-quality ancient Greek artifacts dating from more than 4,000 years ago, marking a new approach in the country’s efforts to reclaim its cultural heritage.

He said the deal will recognize Greece’s ownership of the 161 artifacts from the Early Bronze Age Cycladic civilization – known for its elegantly abstract but enigmatic marble figurines – that have been donated by a New York collector to the Delaware institute. The works will first be exhibited later this year at the Museum of Cycladic Art in Athens, and subsequently at the Metropolitan Museum, he said.

Oikonomou did not name the U.S. collector involved. But two people with knowledge of the agreement told The Associated Press that the artifacts were from the collection of Leonard. N. Stern, an 84-year-old pet supplies and real estate businessman and philanthropist. They spoke on condition of anonymity pending official announcements.

“Many of (the pieces) are extremely rare or even unique examples of the art and artisanship of the 3rd millennium B.C. Cycladic civilization, and offer new data to scientific knowledge of the period,” Oikonomou said in a statement after a Cabinet meeting discussed the deal on August 30.

He provided no details on how the works had been excavated and exported from Greece, and described them as “unknown” artifacts. Archaeologists warn that antiquities of unspecified provenance are usually plundered and therefore devoid of any useful information on their function and cultural significance that a legitimate excavation would have provided.

Oikonomou said the agreement, which avoids any legal dispute or payment by the Greek government, could serve as a model for further restitutions. It’s expected to be tabled in Parliament early next week.

“This creates a procedure and a means that encourages other collectors of Greek antiquities to make similar moves … that don’t carry the disadvantages of a court process,” he said.

A Greek official said the 161 antiquities would be gradually returned to Greece for permanent display, but no precise time frame was available.

For decades, Greek authorities have strived to recoup antiquities illegally excavated and exported from the country, which can be sold for millions of dollars.

Athens has long and fruitlessly lobbied to get back large sections of the 5th century B.C. sculptures that originally decorated the Parthenon Temple on the Acropolis and are now in the British Museum in London.