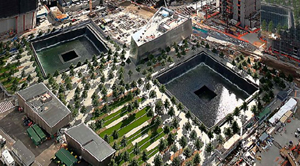 View of the National September 11 Memorial taken from the World Financial Center. This file is licensed under the Creative Commons Attribution-Share Alike 3.0 Unported license.

NEW YORK (AP) – An agreement that paves the way for the completion of the Sept. 11 museum at ground zero was reached on the eve of the 11th anniversary of the terror attacks.

The memorandum of understanding between the Port Authority of New York and New Jersey and the foundation that controls the National September 11 Memorial & Museum was announced Monday.

The museum was supposed to open this month, but construction all but ceased a year ago because of a funding squabble between the foundation and the Port Authority, which owns the World Trade Center site.

“By ensuring that no additional public funds are spent to complete the memorial and museum,” New York Gov. Andrew Cuomo said, “today’s agreement puts in place a critical and long overdue safeguard to finally protect toll payers and taxpayers from bearing further costs, and, at the same time, put the project on a path for completion.”

Bloomberg said the agreement “ensures that it will be restarted very soon and will not stop until the museum is completed.”

“The museum is important to the families of those who died on 9/11 – they’ve contributed photos and memories of their lost loved ones, who deserve a thoughtful tribute,” he said.

Earlier Monday, before the agreement was announced, Bloomberg was asked if the museum could be finished by 2013 if construction started soon.

“We have to do it safely, and we want to do it with the quality of work that will stand up to time,” he said. “Whether it’s doable by then, I don’t know. … To me, the date is nowhere near as important as the other two things. Third, I would say you’ve got to do it within budget. You know, you can work 24 hours a day, with enormous overtime – in this day and age, there isn’t the money for that. The date will be great whenever we get it. And nobody’s going to remember whether it was one months or three months later.”

Mary Fetchet, who lost her son Brad Fetchet in the attacks and founded the support group Voices of Sept. 11, said she was “ecstatic” when she heard the news of the agreement.

“There’s been such an incredible response from people around the world visiting the memorial,” she said. “We feel that it’s really critical to open the museum, to tell the story of the lives of those that were lost.”

Michael Burke, whose older brother, Billy Burke, a firefighter, died while helping two people in the World Trade Center, said he was glad to hear the museum will be “completed eventually.”

“I hope this allows an admission price that’s affordable for the average family,” he said.

The price of an admission ticket to the museum has not been set, but the memorial president has suggested it could be up to $20.

The memorandum of understanding announced Monday addresses issues including coordination of the site and general financial terms but doesn’t go into detail on specific levels of financing. The agreement outlines that the memorial will have six months’ operating expenses on hand as net working capital and that it will give the Port Authority a security deposit equal to six months’ utility expenses, but it doesn’t say what those figures are.

It remains unclear how the foundation will cover the costs of running the museum, once it does open, although the agreement calls for the memorial and the Port Authority to work together to try for federal funding.

New Jersey Gov. Chris Christie said in a statement he was “gratified to be a part of a unified commitment and agreement with Governor Cuomo and Mayor Bloomberg to immediately resume around the clock construction at the 9/11 Museum.”

The underground museum is to house such artifacts as the staircase workers used to escape the attacks. Visitors also will be able to see portraits of the nearly 3,000 victims and hear oral histories of Sept. 11.

The memorial includes a plaza, where waterfalls fill the fallen towers’ footprints. Almost 4.5 million people have visited it since it opened last September. 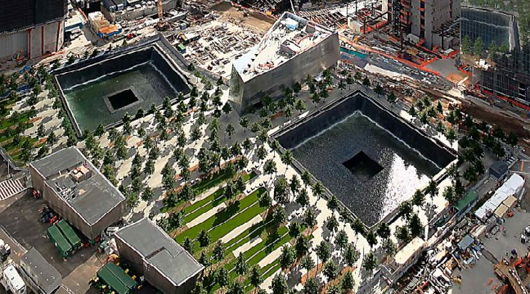 View of the National September 11 Memorial taken from the World Financial Center. This file is licensed under the Creative Commons Attribution-Share Alike 3.0 Unported license.

Famed ‘Electric Map’ of Gettysburg battlefield up for sale