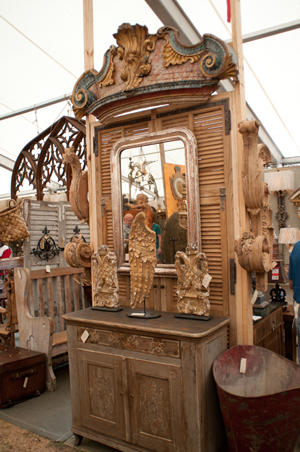 Architectural elements on view at the 30th edition of the Marburger Farms antique show in Round Top, Texas. Photo by studiodetro.com.

ROUND TOP, Texas – They came by busloads from across Texas and by air from as far as New Zealand. They came by limos and by pickup trucks. For the 30th edition of the Marburger Farm Antique Show on April 3-7, they came with high spirits and deep pockets. Buyers were greeted by fine spring weather and a record display of wild bluebonnets in the fields of central Texas.

“It was unreal how many people were shopping,” said Richmond, Va., exhibitor Ben Cochrane. “I have never seen an antique show like it.”

Founded in Round Top in 1997, the twice-yearly Marburger Farm Antique Show now regularly ranks in the top ten best antique shows in America.

“That first show was a few of us set up in the mud,” said Marburger exhibitor Evelyn Jones. “We had space number AA1—the first space. It was a huge success and the show skyrocketed from there.”

Today Marburger Farm welcomes over 350 exhibitors, in 10 tents, many of them as large as football fields, plus 13 restored early Texas buildings with brick footpaths and shady porches packed with exhibitors.

Most unique about Marburger Farm is the amount of quality merchandise available in the large booths and the amount that goes home with shoppers. Exhibitor Kimberly Faison sold a 19th-century Swedish drop-leaf farm table, an 18th-century Italian oval table, Delft pottery, tole trays and an 18th-century English table made of early Cuban mahogany. Faison sold so much that, instead of returning to Virginia, she boarded a plane in Houston to shop in England for the next show.

Tom Bireley of Merriam, Ind., drove 1,300 miles each way to participate. “It was fantastic,” he said. “We sold the most we’ve ever sold—close to 40 pieces of furniture, paintings, and smalls. This is the show that makes our year.”

Marburger Farm seeks out vendors who bring authentic and unique merchandise. Pat and Karen Kenney of South Porch Antiques in upstate New York arrived in Texas with a chest-high cast iron urn, circa 1900, embellished with life-sized egrets and floral designs.

“People were lining up to buy it,” says Pat Kenney. “This was our best show ever. It’s an excellent show and an awesome place.” The Kenneys also sold industrial factory seating, early tables and unusual smalls, as well as a large double-locking medical cabinet to a designer from Nashville.

Interior designers have always made up a significant share of the Marburger shopping community. At its 30th show, Marburger Farm welcomed “Dwell with Dignity” as a new charity partner. Founded by Dallas designers who have opened their hearts and their warehouses, Dwell with Dignity creates simple, beautiful environments from donated furnishings for families trying to escape poverty and homelessness.

From a tent in the middle of the show, Dwell with Dignity volunteers networked with designers from other cities and sought donations from the Marburger vendors. From transferware to birdcages to a giant IBM clock, the donations appeared the following week in the organization’s Thrift Studio Pop-Up Shop in the Dallas Design District, all for sale to benefit the work of Dwell with Dignity. Uncommon Objects of Austin styled the Marburger Room and pies were donated by Royer’s Café of Round Top. “We are thrilled to provide Dwell with Dignity a home-base during Antiques Week,” said Marburger show manager Ashley Ferguson. “It will only grow from here.”

Marburger artisan exhibitor Dolan Geiman of Chicago has contributed artwork to Dwell with Dignity. “They are trying to change people’s outlook and increase their self-esteem by creating a nice environment for those who would not otherwise have it,” said Geiman.

The artwork he offered at Marburger Farm combined antique found objects, collage and mixed-media, such as an 1800s hymnal and a 1950s magazines found in an abandoned house. Among the vast range of antiques, Marburger Farm also offers about 30 artisan exhibitors with original folk art. “Our show was good and we’ll be back in the fall,” said Geiman.

The show also gave a portion of ticket sales to Texas Children’s Hospital and hosted the Brookwood Community, a residential program for functionally-disabled adults near Houston. Brookwood sold live plants, gourmet items and handmade décor created by its residents.

Special events included book-signings, one by columnist Karen Weir-Jimerson of her book So Much Sky and another by Leslie Sinclair, author of Segreto—The Secret to Beautiful Finishes.

Marburger welcomed new food vendor Legal Tender Saloon to the task of providing thousands of fresh meals from a kitchen on a cow pasture. “The food was certainly good and the lines moved faster,” said Marburger exhibitor Al Linder of Northfield, Minnesota. Linder sold American farm primitives such as windmill blades and gates, as well as advertising and resort signs. He had participated in all but three of the past 30 Marburger Farm shows.

Destin, Fla., exhibitor Ann Miller Hopkins sold rustic European antiques such as cabinets, tables and art. “You have more opportunity to sell things at Marburger Farm, especially if they are one-of-a-kind and functional for a home. There were lots of designers with projects, which is encouraging,” Hopkins said. She was so encouraged that she left right after the show to buy in Belgium for the fall show.

The Marburger Farm Antique Show will take place Oct. 2-6, 2012. For additional information, log on to www.roundtop-marburger.com. 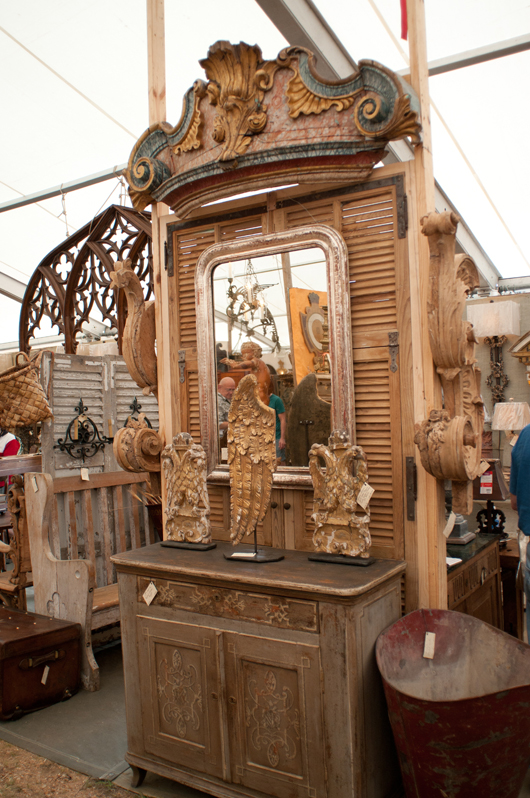 Architectural elements on view at the 30th edition of the Marburger Farms antique show in Round Top, Texas. Photo by studiodetro.com.