NEW YORK (AP) – It’s the Holy Grail of Tiffany lamps, a sublime stained-glass shade of lilies in soft hues of pink and green, cascading down in an oblong bell to a bronze base molded to resemble the delicate pads in the water.

There’s only one left in the world for sale – the other seven variations are in museums or private collections – and it can be yours from the Macklowe Gallery in New York for a mere $3.5 million.

The lamp was among the most opulent of antiques and antiquities on display at this year’s Winter Antiques show. Regarded as the premiere antiques event in America, 75 dealers were at the annual bazaar, where New York socialites were the main clientele and museum curators perused works as large as 7 tons and as teeny as a dime.

And priced accordingly. Of course, most of these items will be bought by museums or other public institutions with galleries. But if you have the money, anything’s possible.

Benjamin Macklowe, of the Macklowe Gallery, said they waited for the show to reveal the lamp, which would’ve cost $400 in 1906. (About a year’s salary for a well-employed person.)

“My father has been chasing this lamp for 25 years,” he said. “He would hear whispers of its existence and just fly off to someplace searching for it. It was a dream come true when he found it.”

And speaking of lilies, Adam Patrick of the New York gallery A La Vielle Russie Inc. showed off a diamond-encrusted lily pin so bright it hurt to stare. It was the size of an actual flower you’d fasten to a groom’s lapel, and was made from at least 500 tiny, near-perfect gems. The cost? $110,000.

The brooch was English, dating from around 1840, in the days before platinum when silver and gold were both used to create jewelry.

“Such a delicate setting, and it’s so big, it must’ve been so involved to make,” Patrick said.

Dealers wait decades for a booth at the show, which benefits the East Side Settlement. They view it as a prime chance to show off their best and most fabulous pieces.

James Elkind of Lost City Arts brought his best find for his maiden trip to the show: an Art Deco eagle that was the model for those on the Empire State Building. Created in glazed plaster, it’s in remarkable condition and was designed by Shreve Lam & Harmon Architects. It sold for $60,000.

“I mean, that is what I got into the business for,” he said. “To rescue art, and to come with this to the show … well, it was amazing.”

But for size, a 7-ton, 9-foot-high, solid marble urn designed by Paul Manship, the sculptor who created Rockefeller Center’s Prometheus, was hard to beat. The urn was a private commission by a wealthy industrialist who installed it in his estate in a Cleveland suburb.

It was made by Manship’s crew in the Bronx, and looks like it should be from ancient Greece, except the images on the urn are those of Native Americans chasing bison. And it rotates on its pedestal.

“Made in the South Bronx, you couldn’t have more American if you tried,” said Alice Duncan, director of Manhattan’s Gerald Peters Gallery, offering the urn for $6 million.

A statue of Aphrodite, though, really was ancient: from the first century, in fact. The statue, being sold by Rupert Wace Ancient Art Limited of London, depicts the goddess of love standing on her right leg, left bent at the knee, with her drapery falling in elegant folds around her hips. Her arms and head are missing. The asking price is $650,000.

“We’ve seen fragments before, but nothing this complete,” said Wace, who travels the world looking for ancient works of art. “You won’t find another one like it on the market.”

Among the first photographs ever made are also on sale. When Jacques Daguerre was creating his daguerreotypes in France, William Henry Fox Talbot was doing the same in England. And Hans P. Kraus Jr. Fine Photographers has several Talbots, including one of the first negatives, known as the Roofline of Lacock Abbey, from 1839. It’s $400,000 for the image, which measures about 4 inches by 5 inches.

Talbot worked with paper, while Daguerre worked on a metal plate. The result is a similarly eerie-looking image of intense clarity. The Lacock Abbey negative has a creepy sort of horror-film look to it, like something out of The Exorcist.

“These are in the finest condition for sale,” Kraus said. “And it’s the largest assemblage I’ve ever displayed.”

The Tiffany lamp and many of the other opulent pieces are on display in shows around the country. Macklowe said he’ll be a bit sad when the lamp sells – and he hopes it goes to a museum where anyone can see it.

“Could you imagine having this in your home? I’d just stare at it all day. I’d never get anything done.” 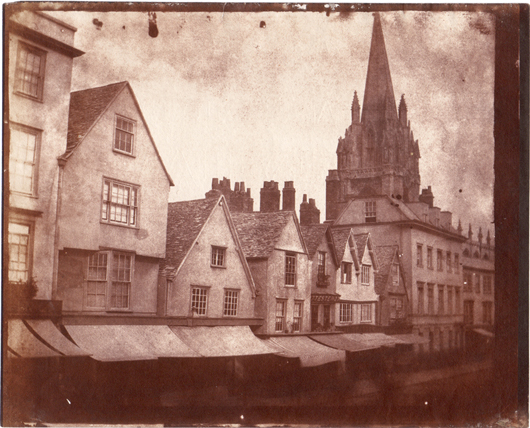 James Elkind of Lost City Arts sold this Empire State Building eagle macquette for $60,000. The circa plaster of paris figure is 41 inches high. Image courtesy of the Winter Antiques Show. 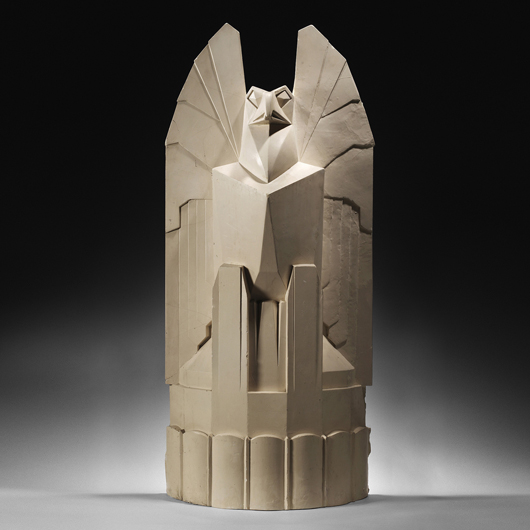