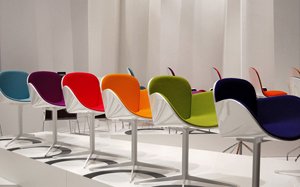 MILAN (AFP) – Austere furniture for austere times was the message from this week’s Milan design fair, where the aesthetics of the sober 1940s and 1950s prevailed and extravagance gave way to functionality.

“Design needs to take into account a significant economic crisis which has led to a re-interpretation to make products more functional while avoiding provocations,” architect Marco Romanelli, a fair organiser, told AFP.

“The attention is increasingly on the materials,” Romanelli said. The yearly fair, which ends on Sunday, is expected to bring a total of 300,000 visitors to its 1,400 stands and is the main event on the international design calendar. It is open to the general public on Saturday and Sunday.

Some of the highlights include the “Ghost” series of plexiglass chairs and sofas by renowned French designer Philippe Starck, giant flower-shaped couches by Aster Papposus and wicker pagoda-shaped basket cocoons by Dedon.

Massimo Morozzi’s rose wood designs for Edra were also an eye-catching feature of the 15-hectare (37-acre) fair, while Vitra re-issued some of its post-war classics from the Solvay stool to a metal-and-wood sofa.

French designer Jean Nouvel was at the show with his startling tubular aluminium chair “Mia” — available in red, white, black and grey. “Mia has a strong and happy character which will guarantee its success,” he said.

The fair, which includes kitchen and bathroom sections, is expected to be a boon for Milan with more than half of the visitors coming from abroad and expected to bring in 194 million euros ($255 million) in tourism revenue.

Apart from the sterner mood, this year’s designs showed the influence of new technology and changing lifestyles, including tongue-in-cheek numbers like a wedding dress made of potato peels that can be biodegraded after use. 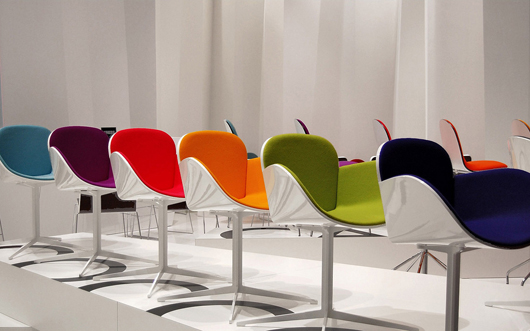