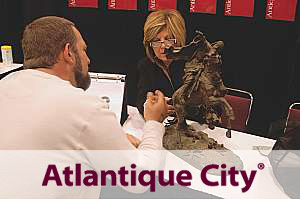 ATLANTIC CITY, N.J. (ACNI) – Atlantique City is giving up its Fall edition and reverting to an annual spring show. Dealers and shoppers at the Oct. 18-19 Atlantique City, held at the Atlantic City Convention Center, were advised of the change via printed handouts from the show’s management.

Dan Morphy, chief operating officer of Morphy Auctions, is one of approximately 300 dealers who were set up at the October 18-19 event. He told Auction Central News that the notice received “a very positive response” from dealers. “Maybe this will restore some of the excitement and energy that the show had in its earlier days when it was only held once a year, in the spring. We’re very optimistic, especially after seeing the surprisingly good turnout of buyers this weekend,” Morphy said.

Atlantique City was founded in 1986 by retired advertising executive Norman Schaut. It began as an annual event to be held in March. In its first decade, the show drew an international mix of exhibitors and shoppers who conducted trade at the convention center venue. The show’s capacity at that time was some 10½ acres.

Krause Publications of Iola, Wis., known for its hobby periodicals and books, purchased the Atlantique City show in 2001. Like so many other antiques events, Atlantique City was dealt a serious blow in the aftermath of 9/11, as Americans curbed their travel, and the importation of goods to the United States became a slow and tedious exercise. Nevertheless, Atlantique City’s management team worked tirelessly to produce enticing shows in hopes of sustaining its attendance.

Over the years, each edition of Atlantique City has included a special exhibition, including such past favorites as Treasures from the Titanic, The History of Monopoly, and The Kennedy Collection. The March 2006 show featured the 100th anniversary of Mr. Peanut in a popular exhibit that included the Peanut Mobile.

In July 2002, Krause was purchased by F+W Publications of Cincinnati, Ohio. F+W Publications is home to such titles as Writer’s Digest, HOW and Memory Makers, six book imprints, seven book clubs and a variety of educational products.

Atlantique City is presently produced by F+W’s Eric Bradley and his supportive staff of fellow F+W employees. The Spring 2009 edition of Atlantique City will be held on March 28-29 at the Atlantic City Convention Center. Additional information is available online at www.atlantiquecity.com.