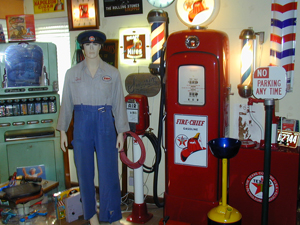 Some of us can remember when a uniformed attendant pumped our gas. Can you? This display idea was seen in Eric Glickman’s booth at the Aug. 7-8 West Palm Beach Antiques Festival.

WEST PALM BEACH, Fla. – Kay and Bill Puchstein, owners of the West Palm Beach Antiques Festival, are feeling pretty smart these days. Producing a show during the summer – a season known as being a sparse one for antiquing in Florida – has proved to be good thing for the festival, the dealers and the customers. Attendance was up again at the Aug. 7-8 show, and the reduced early buyer charge, cut from $25 to $10 on Saturday morning, tripled the number of entrants before the show’s opening.

One dealer from Stuart, Fla., had such strong sales during early buying that he said he could just pack up and take the rest of the weekend off. He didn’t, of course, but it got the ball rolling in the right direction, and he had strong sales all weekend. A jewelry dealer from Coral Springs, Fla., has had her best two shows ever in the last two summer shows and she has been a regular monthly dealer for 10 years. One pair of dealers who had not done the show in several years set up for the August edition and did so well they signed up on the spot for the Sept. 4-5 event.

A dealer who has had strong sales at West Palm Beach Antiques Festival since the early 1990s is Eric Glickman, owner of Your Fondest Memories. And he has a good time doing it. He thinks his booth is the best-looking one at the show, since it is filled with all the things baby boomers remember from their 1950s and earlier childhoods. He had a nice selection of the coin-operated dispensers that used to lure kids of the period with their contents of bubble gum, candy or peanuts. He also had a great inventory of the old advertising signs today’s adults grew up with, ranging from soda fountains signs to ice cream advertising to gasoline and oil ads. But the real bait was the selection of lithographed toys, backed up by the pre-war trains.

Glickman said his booth is a fun place to just walk past and even an even better one to walk into. He said the most frequently heard comments are, “I used to have one like that” and “I remember that.” Glickman’s booth gives them the opportunity to take home a slot machine or the gasoline sign to put in the recreation room. Lots of Glickman’s trains and toys have ended up on customer’s shelves to decorate a den or study. He says it’s like being able to take a piece of their history home. More than 500 items in the Glickman booth offered that opportunity.