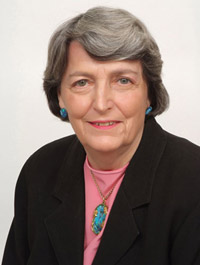 Terry Kovel will be the antiques and collectibles auctioneer for WVIZ’s annual fund-raiser. Image courtesy Kovels.

CLEVELAND – Antiques and collectibles expert Terry Kovel, whose popular Kovels – Antiques and Collecting column is a regular feature on Auction Central News, will be the guest auctioneer for WVIZ’s annual fund-raising auction April 23-23. For the first time the auction will be streaming live online to Kovels.com, the popular Web site for collectors. To watch the auction live and to bid online visit Kovels.com and link to the WVIZ website. Kovel is a longtime supporter of WVIZ, Cleveland’s Public TV station.

More than 4,000 items donated by listeners and businesses will be sold on air to the highest bidder – no reserves. Viewers are invited to call the station with bids or to bid online. The bidding phone number will be shown on the screen. So far, donations include a pair of 1950s Baker Furniture end tables, a satsuma bowl, a Meeks Victorian chair, a Jenny Lind bed, a French provincial 1960s dining room set, Meissen figurines, an early pair of Sheffield candelabra, a Lenci doll, Tootsietoy dollhouse furniture in the original box, paintings, comic books and baseball cards. More items are arriving every day.

Kovel will be auctioning antiques every evening, from Thursday, April 23, through Sunday, April 26. The auction starts at 3 p.m. Thursday and Friday, and at noon Saturday and Sunday. Watch it all or just the antiques, art and collectibles segments. There are always bargains and great surprises.

Viewers can preview auction items or register to bid online now. Go to the WVIZ Web site, WVIZ.org, or call the auction office at 216-916-6154. Donations will be accepted until April 23. When a donated item is auctioned, the donor’s name will be read on the live TV auction.

Terry Kovel, with her husband, Ralph, has written more than 98 books about collecting, including the best-selling annual price book, Kovels’ Antiques and Collectibles Price Guide. Terry publishes a subscription newsletter and writes a syndicated newspaper column that appears in more than 150 newspapers and digital publications. She and Ralph starred in the weekly HGTV program, Flea Market Finds with the Kovels. The Kovels website, Kovels.com, offers 700,000 free prices and other information for collectors, including books, special reports, a weekly e-mailed letter to collectors, and an archive of other informative material. Since Ralph’s death in 2008, the Kovel brand has been continued by Terry Kovel and her daughter, Kim Kovel. This fall they will go on a lecture tour to promote the 2010 edition of Kovels’ Antiques and Collectibles Price Guide.