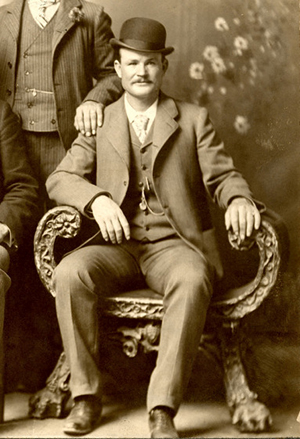 LARAMIE, Wyo. (AP) – On a bright, clear Friday afternoon, John “Mac” Blewer stood outside the entrance to the Wyoming Territorial Prison, its heavy iron door once a demarcation line for convicts between a life of freedom and one substantially less sunny.

On this day, however, the centerpiece of Blewer’s discussion wasn’t the 1,063 men and women at one time locked inside the prison’s stone walls.

Rather, it was about one convict in particular, the prison’s most famous.

“That’s where Butch came through, right there, in that archway,” Blewer said.

Blewer is uniquely suited to give this tour and elaborate on Robert LeRoy Parker, a man of at least 10 known aliases, but commonly known in fact and fiction as Butch Cassidy, the notorious American West outlaw and leader of the Wild Bunch Gang.

The 41-year-old New York City native is a seasonal employee at the prison, providing tours, visitor services and historical interpretations at the facility originally built in 1872, and a University of Wyoming graduate student.

More precisely, he’s the architect of the master’s thesis, “Representations and Remembrances of Butch Cassidy in Wyoming and the American West: The Invention of an American Tradition,” a 180-page volume that took 2 1/2 years to finish.

He’s also the author of an upcoming book, Wyoming’s Outlaw Trail, a look at the “historic and folkloric path that meandered from Canada to Mexico” used by Butch, cohort the Sundance Kid, and other infamous outlaws like Frank and Jesse James.

Blewer’s research will be incorporated into an exhibit at the prison, today a state historical site, to be displayed in the old kitchen in the north cell block beginning in spring 2014.

The outlaw is steeped in mythology and folklore.

Small-time rustler, prisoner, gang leader, trickster, bad man, good man, a Robin Hood of the people, bank robber, social outlaw and the “bandit invincible” – these are some of the labels ascribed to Cassidy throughout time.

Mysteries have endured over generations from his life to his death to his burial site.

“I think that’s what makes Cassidy a fascinating study – he’s all these things to all people.”

The researcher also summed up Cassidy this way: “Butch Cassidy, remember, is a myth and an invented tradition, as American as Davy Crockett, Daniel Boone or baseball.”

But, before that myth was cemented in national headlines describing his various robberies and escapades, Cassidy was Parker, a Beaver, Utah, native, convicted of larceny and sentenced to two years at the territorial prison, the site of his only extended incarceration.

He spent 18 months in the prison, from 1894 to 1896. Ironically, Cassidy’s brother, Dan Parker, also served a stint, probably around three months beginning in 1890, for robbing a mail coach near Rawlins.

The brothers’ misdeeds weighed on their mother, Ann Campbell Gillies, who Blewer said would “walk the fields, crying over her wayward sons.”

At the territorial prison, Cassidy was known as a well-behaved prisoner, site superintendent Deborah Amend said. He was most likely housed in the south cell block, though it’s unknown which of the block’s 42 cells he stayed inside.

“The warden actually liked Butch because he was charismatic,” Amend said.

“As charismatic as he was, he wasn’t caught talking. He obeyed the rules,” she added, citing the prison’s enforced codes of constant silence among convicts.

The south wing features photos of Cassidy – one of him and the Wild Bunch and another of him just before lock up at the territorial prison – and two posters from the 1969 movie Butch Cassidy and the Sundance Kid starring Paul Newman as Butch and Robert Redford as Sundance. It also includes Butch and Sundance comics, dolls and other collectibles issued following the movie’s release.

Blewer’s research included poring over countless documents and books, interviewing Cassidy researchers, authors and family descendants, and visiting places where the outlaw was rumored to have stayed. He’s even visited some of the 50-odd sites believed to be Cassidy’s final resting place.

The burial site, like Cassidy’s death, is subject to debate.

It’s believed by some that Butch and Sundance died in a shootout with authorities in November 1908 in San Vicente in southern Bolivia, however, there have also been witnesses who contend the outlaws survived and later returned to the U.S.

“We know today the man is dead,” he said. “We just don’t know where he died.”

The myths, legends and speculation surrounding Cassidy are indicative of a culture still fascinated by the outlaw, he said, his likeness forever freeze-framed by Newman’s portrayal with the song Raindrops Keep Fallin’ on My Head humming in the background.

“It’s almost like people didn’t want to let these legends die,” Blewer said. “And that kind of epitomizes Butch Cassidy.”

He believes Cassidy returned to the U.S. from Bolivia.

“Exactly what happened, I think that would be incredibly arrogant for me to say (definitively),” Blewer said. “We don’t know what happened. Personally, I believe Butch Cassidy did come back.”

Over the years, people in the West have reported meeting or seeing Cassidy post-1908, testimony that helps shape Blewer’s belief.

“I don’t think they were delirious,” he said. “Josie Bassett of Browns Park; Hank Boedeker, a lawman from Lander; His (Cassidy’s) own family. However, if it wasn’t Butch Cassidy they met and it was an impostor, like William Phillips, who impersonated Butch Cassidy in later years, and he fooled all of these people – that would have been the perfect performance, worthy of an Oscar.”

Blewer, whose nickname is short for his middle name, MacGregor, will graduate from University of Wyoming in December with his master’s in historical geography. He completed his undergraduate degree in environmental biology from the University of St. Andrews in Scotland.

A Laramie resident for three years, he said he’s open to staying in the community following graduation. His book will also be released to the public in January.

Following graduation, he’d like to find a research or teaching position. Somewhere in the West, he said, with its rich histories and traditions of outlaws and bandits, would be ideal, but returning home to the Northeast is also appealing.

No matter the career path or projects he takes on in the future, Blewer believes it’s unlikely he’ll ever find a research subject as compelling as Cassidy, the antihero whose legend lives on.

“In the pantheon of American outlaws, he’s up there,” he said. “If he’s not Zeus, he’s Apollo. I think Butch Cassidy and Jesse James take the cake.

“Researching any historical figure is fascinating, but I don’t think there is anyone like Butch Cassidy.” 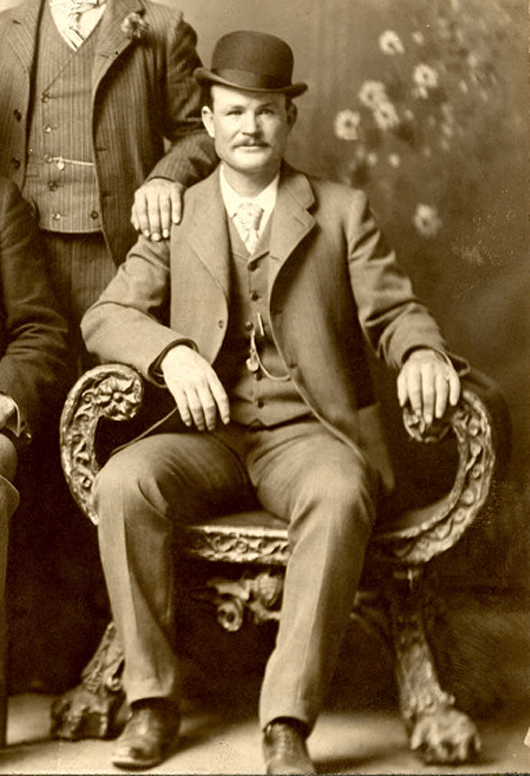