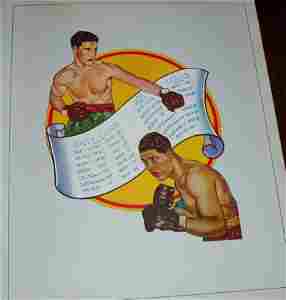 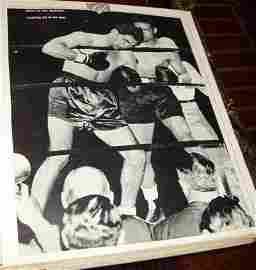 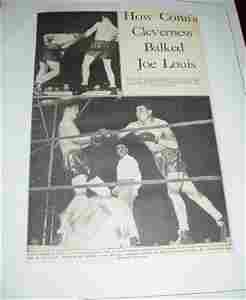 The albums contain newspaper clippings and other materials from throughout the United States and other countries from 1935 to 1941 and articles from Ring Magazine. This collection documents the Joe Louis fights from June 25, 1935 through 1941, including championship fights from June 22, 1937 through September 29, 1941.

The albums were assembled with great care using high quality binding paper. The clippings are neatly mounted and show great attention to detail. All clippings are identified by the name of the newspaper, day of the week, date, author, artist or photographer. Clippings include full length articles and brief sketches, cartoons, photographs, records and statistics of the boxers. The clippings are grouped in volumes by each of Louis’s fights and arranged chronologically there under.

Hundreds of major newspapers throughout the United States and other countries are represented in the albums. Coverage extends from very large metropolitan dailies to small town newspaper. Among the newspapers represented are titles as diverse as: Akron Beacon Journal; Daily Colonist, Victoria, British Columbia; Shreveport Times; Tribune Tulsa; and the Worchester Daily Telegraph; N.Y. Staats – Zeitung Und Herold, Donnerstag; etc. Many of the German newspapers were destroyed during the war and others are not in existence today.

Louis became one of America’s most celebrated sports figures both for his extraordinary boxing skills and for his role as a symbol of national pride, especially in his bouts with the German Champion Max Schmeling. His national respect and International prominence stood in ironic contrast to the Nation’s legal and social practices of racial segregation. This collection is truly a national treasure.

While these albums are about the Joe Louis fights, there is a wealth of material on many other people connected with boxing in this period, including all of Joe Louis’s opponents, his trainer, his managers, his promoter Mike Jacobs, and most of the sports reporters and writers of the time. Anyone of any importance connected with boxing during this period can be found in the pages of these volumes. There are also retrospective articles on earlier boxers and historically important fights. 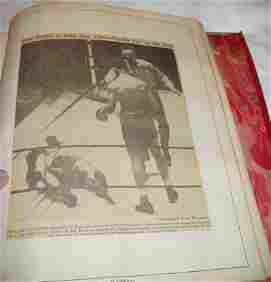 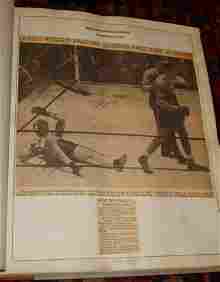 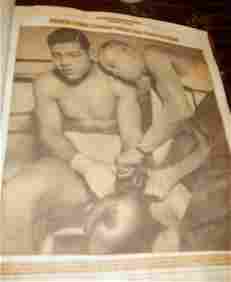 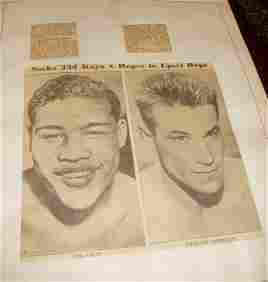 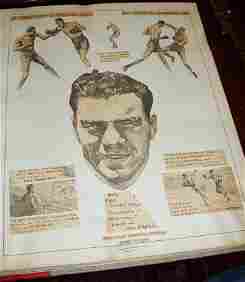 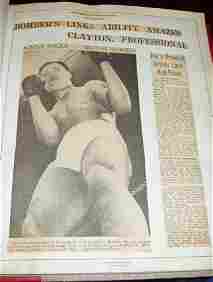 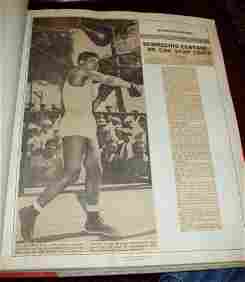 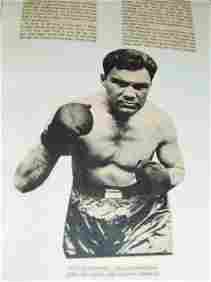 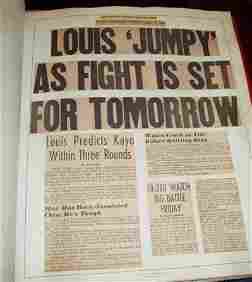 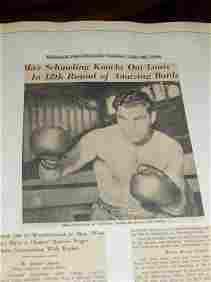 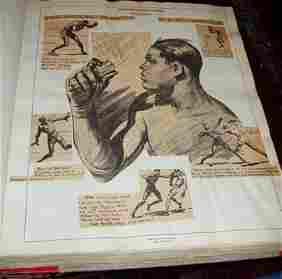 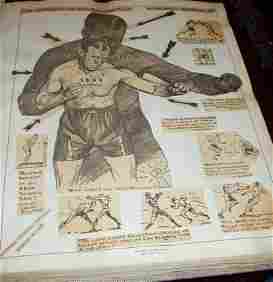 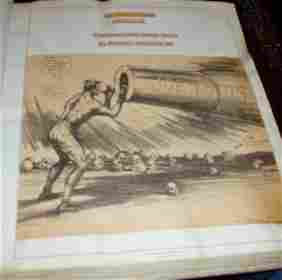 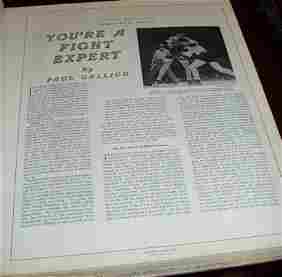 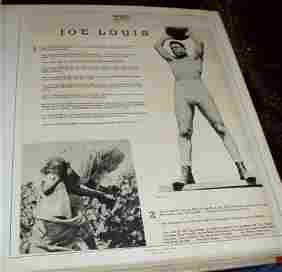 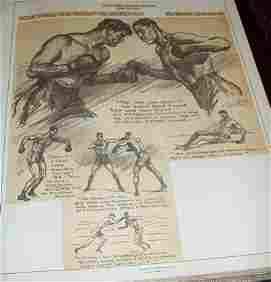 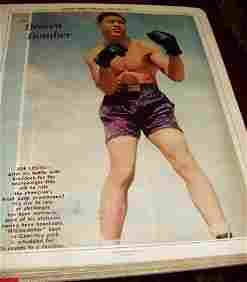 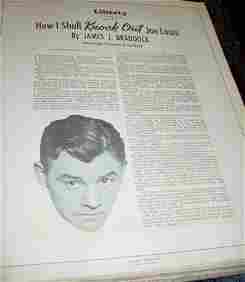 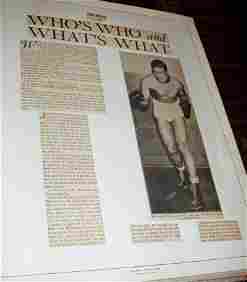 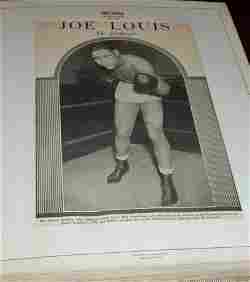 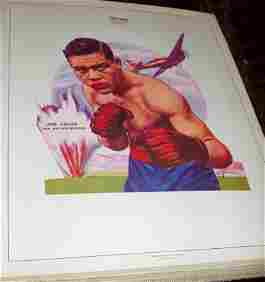 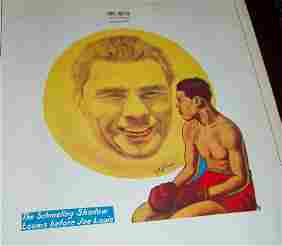 All bidders are responsible for reading and understanding these Terms of Sale, as well as any supplemental notices. No communications by any employee of Priddy’s Auction Galleries is intended to be binding, and such communications are made for informational purposes only. 1. General: All merchandise SOLD AS IS. Priddy's Auction Galleries, Inc. Is Not Responsible For Conditions, Correct Description or Authenticity of Items and Makes No Warranty Whatever. Prospective bidders should inspect the property before bidding to determine condition, size and whether or not it has been repaired or restored. No refund or credits shall be issued. We reserve the right to withdraw any property before sale. This is privately owned and operated sale. We reserve the right to refuse admittance to any person. 2. Auctioneer’s Determination Final: The auctioneer has the sole and exclusive power, discretion and authority to regulate the bidding and its increments. The highest bidder acknowledged by the auctioneer will be the purchaser. In the event of any dispute between bidders or in the event of doubt on our part as to the validity of any bid, the auctioneer will have the final discretion either to determine the successful bidder or to re-offer or resell the article in dispute. Upon the announcement by the auctioneer, the successful bidder becomes the purchaser and is responsible for the amount of the successful bid, the buyer’s premium, applicable taxes, and other charges provided for in the Terms of Sale. 3. Buyer’s Premium: A buyer’s premium in the amount of 15% of the successful high bid will be added to the amount of the successful bid price for all lots purchased at auction. 4. Taxes: Applicable taxes shall include Denver Sales Tax (7.2%). Only valid resale certificates are accepted as proof of exemption from Denver Sales Tax by U.S. dealers. It is up the dealer to make sure we have a current resale certificates in our files. No Sales Tax is charged for purchases shipped out of state. 5. Payments: All purchases will be in U.S. Dollars. Acceptable methods of payment are: Visa/MasterCard, American Express, Discover or PayPal. Checks and Money Order are also accepted. All payments are due upon receipt of invoice. We reserve the right to hold all goods paid for by check, money order or wire transfer until payment has cleared. Negative Feedback will be given to non-paying bidders. 6. Condition Reports: Condition reports are statements of opinion by the staff of Priddy’s Auction Galleries. It is not a warrantee. If you would like a condition report for items in the sale, please call us week of sale. Please allow us time to prepare the report prior to the auction. Priddy’s Auction Galleries is not liable or responsible for any errors in the condition report or failure to deliver the same. 7. Collection of Property: All articles must be removed within seven days after the sale. Any item not removed within seven days will be moved and stored by Priddy’s Auction Galleries. Fees will be charged accordingly. Priddy’s Auction Galleries is not responsible for loss or damage to merchandise. We are also not responsible for the acts of omissions of carriers or packers of purchased lots, whether or not recommended by us. Packing and handling of purchased lots by us is at the entire risk of the purchaser. In no event will we be liable for damage to purchases, regardless of the cause. 8. Shipping: Priddy’s Auction Galleries will assist in any way we can to help you with your shipping needs. We have custom crating & shipping available, domestically and internationally. All items are Insured. Items are usually crated or packaged within 5 days after payment. If it looks like it will take longer, we will notify you. Shipping is either with DHL or Forward Air. Shipping will be to your door in most cases. You will need to uncrate and assemble, if necessary. If you would like to look into other shipping options, please keep in mind you will be responsible for arranging handling, shipping, insurance and all associated costs. We can crate for a nominal fee, if needed. 9. Governing Law: The laws of Colorado shall govern the auctions of Priddy’s Auction Galleries. Any disputes which may arise in connection with the auction and/or any auction purchase, and all the terms and conditions set forth herein above, shall be governed by and construed in accordance with Colorado law. Any one who participates in the auction and/or makes auction purchases agrees to submit to the jurisdiction of the courts of the State of Colorado with respect to any dispute arising in connection with the auction and/or any auction purchases. In the event that Priddy’s Auction Galleries needs to bring an action to enforce their terms and conditions herein and/or to collect any sum due and owing to it, Priddy’s Auction Galleries shall be entitled in addition to collect its reasonable attorney’s fees, collection agency fees, and cost of suit. 10. Priddy’s Auction Galleries acts only as the agent for the consignor and in no event will be liable for any breach of default by the consignor. 11. If any provision of portion of these Terms of Sale shall be deemed unlawful, void or unenforceable under applicable law, that provision or portion shall be stricken and severed from the remaining provisions which shall remain in full force and effect. Failure to enforce any of the provisions in these Terms of Sale shall not be deemed a waiver of the right to enforce any other provisions of these Terms of Sale. 12. Unless Priddy’s Auction Galleries consents in writing, purchasers may not assign their rights or any of their obligations related to an auction or other sale by Priddy’s Auction Galleries. 13. These Terms of Sale may not be changed unless Priddy’s Auction Galleries and purchaser have agreed to do so in a written agreement signed by both parties.

We will also be selling a French Marquetry Inlay Marble Top Dore Bronze Drop Front Secretary, which was purchased from Joe Louis’s family.


Coincidently, as this catalog was being finished, Mac Schmeling had past away at the age of 99. Max Schmeling had treasured his friendship with Joe Louis and quietly gave him gifts of money during Louis’ financial problems. He had paid for Joe Louis funeral.