After Giuseppe Capogrossi Composition in Black and
See Sold Price 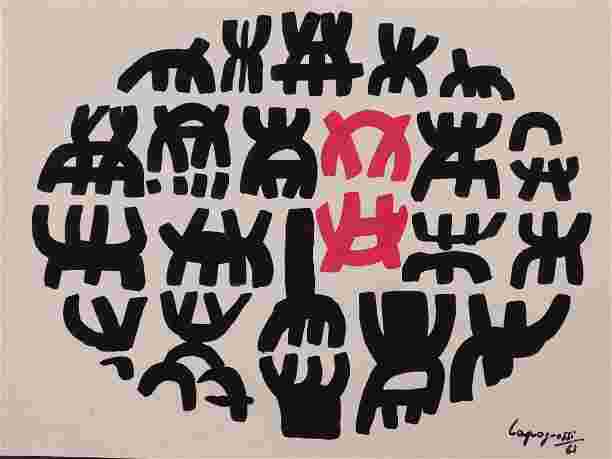 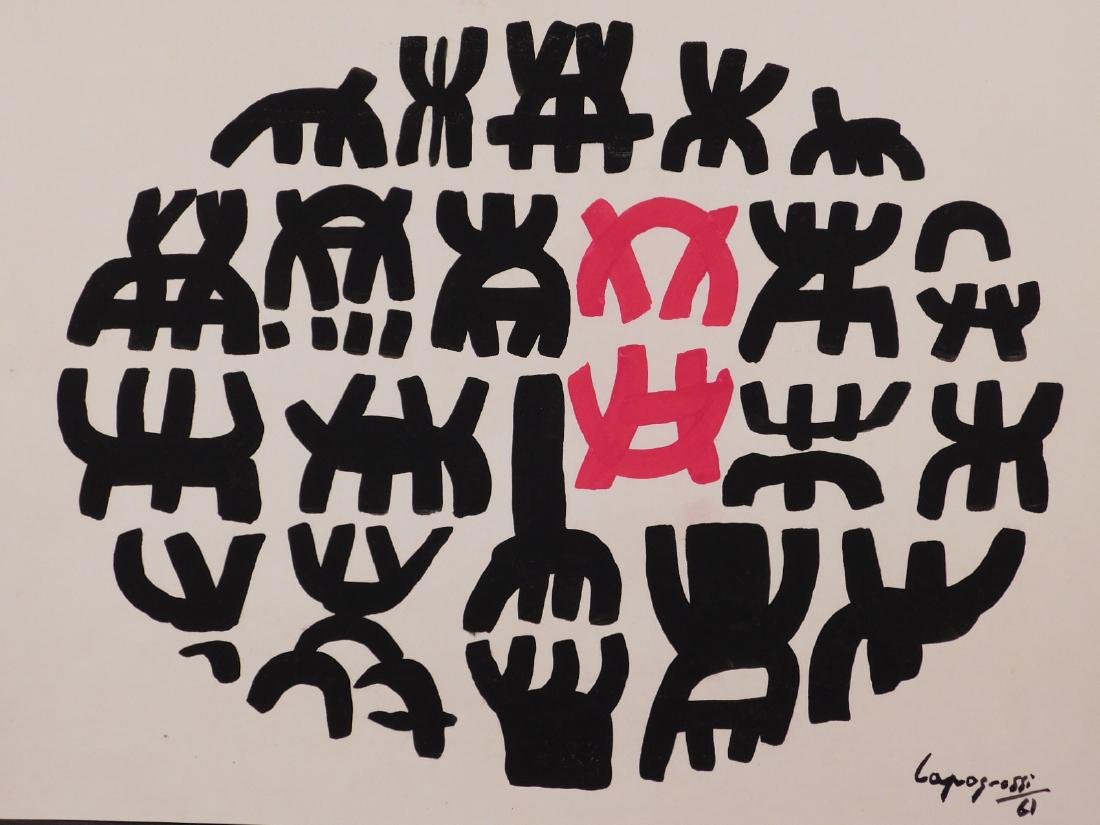 Giuseppe Capogrossi was born in 1900 in Rome. After earning a law degree in 1922, he decided to become an artist and began to study under the fresco painter Giambattista Conti, and later at the studio of Felice Carena. Around the same time he formed a close relationship with the painter Emanuele Cavalli, an association that would last some twenty years. In 1925 he attended the Casa d'Arte Bragaglia, and between 1927 and 1933 he traveled several times to Paris, where he became particularly interested in the work of Pablo Picasso, Amedeo Modigliani, and Pierre-Auguste Renoir.

In 1928 Capogrossi was invited to show at the Venice Biennale, and in 1932 he participated in the III Mostra del Sindacato Regionale Fascista Belle Arti del Lazio in Rome, showing paintings that revealed the influence of his time in Paris. In early 1933 he exhibited with Corrado Cagli and Cavalli (as part of the loosely associated group known as the Scuola Romana) at the Galleria del Milione in Milan, the epicenter of Italian abstract art. The reserved, pale color palette and subtle geometric cadences of his works from this period suggest his tutelage under fresco painters. Capogrossi was featured in several major exhibitions of Italian artists in the 1930s, including Exposition des peintres romains in Paris in 1933 and the Quadriennale of Rome in 1935; following the latter, critics recognized him as one of the major figures in the renewal of Roman painting.

In 1939 he was given his own room at the Quadriennale of Rome. The postwar years saw Capogrossi paint his first abstract works, and by the end of 1949 he had developed a distinct post-Cubist vocabulary of his own, formalizing a language of signs that involved the arrangement of comblike matrices in compositions that were at once logical and free, aligning him closely with the Art Informel movement. In 1951 he co-founded the Gruppo Origine with Mario Ballocco, Alberto Burri, and Ettore Colla, through which they hoped to promote the ideals of abstract art, including a reductive simplicity of expression. Capogrossi also worked as a teacher for a large part of his career. He participated in Documenta in Kassel in 1955 and 1959, and in 1974 the Galleria Nazionale dâ€™Arte Moderna in Rome organized a major retrospective of his oeuvre. Capogrossi died in 1972 in Rome.br>11.6 x 16"
Private collection England, from the Estate of Silvio Aguayo Espejo Vina del Mar Chile

Good aged condition: smudges, accretions, slight staining.
NOTE: If documentation is not listed, the lot is sold without documents.

Franklin, MA, USA
35 Reviews
989 Followers
Get notifications from your favorite auctioneers.
As Seen On
Shop With Confidence
Since 2002, LiveAuctioneers has made exceptional items available for safe purchase in secure online auctions.
Popular Searches
Artists & Creators
Brands
Style Periods
Origins
Company
Winning
Selling
Â© 2002-2020 LiveAuctioneers. All Rights Reserved.Cookie PolicyTerms & ConditionsPrivacy Policy
This site is protected by reCAPTCHA and the Google Terms of Service and Privacy Policy apply.
BACK TO TOP