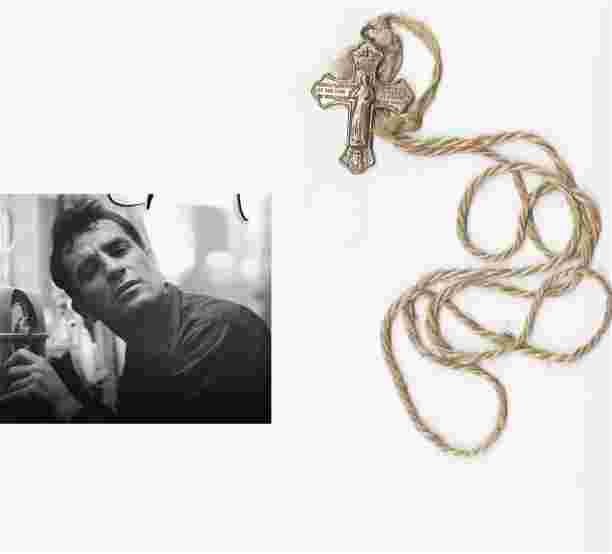 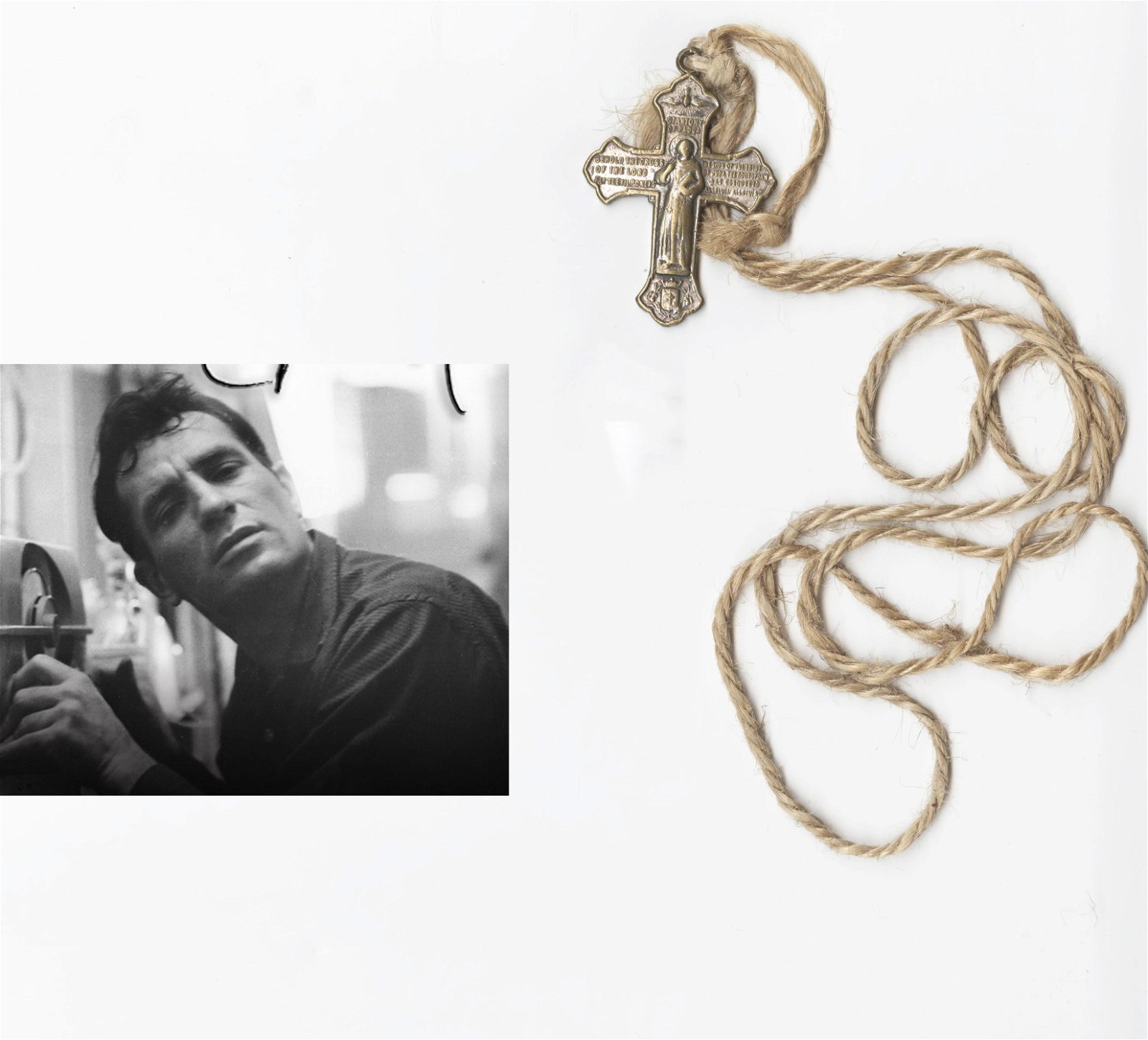 Jack Kerouac's peronally owned cross, 2.25" in length and attached to a jute rope as a necklace. The cross appear worn with some of raised relief rubbed away (a sign of it being well coveted and worn by Kerouac). It is impossible to overstate the influence of Catholicism and religion in Jack's life and in his writing. This important piece is therefore extremely significant in its relevance to Kerouac.

Provenance: The piece will be accompanied by an estate certification signed by John Sean-Sampas, executor of the Kerouac Estate. John Sean-Sampas is the son of John Sampas, who was the brother-in-law of Jack Kerouac, and the brother of Stella Kerouac, Jack's wife

Jack Kerouac was raised as a Catholic by devout parents who had come to New England from French-Canada, the pre-Vatican II Catholicism that saturated Lowell’s tight-knit French Canadian community. Gabrielle Kerouac—Jack’s mother—matched Leo’s (father) civic pride with a fervent religious faith, which if anything intensified after the death of Jack’s older brother Gerard, whom Jack would later eulogize as an unheralded saint in the novel "Visions of Gerard" (later becoming "Visions of Cody". To New England’s mostly impoverished French Canadians, the Catholic Church served as de facto government, educator, extended family, and cultural arbitrator. Perhaps as a result of this spiritual immersion, and the death of his brother, both Gabrielle, and Jack saw signs of God and angels everywhere.

According to Kerouac, "On the Road" ... "was really a story about two Catholic buddies roaming the country in search of God. And we found him. I found him in the sky, in Market Street San Francisco (those 2 visions), and Dean (Neal) had God sweating out of his forehead all the way. At the core of “On the Road,” and at the heart of all his work, is the Catholic and Beat insistence upon an underlying spirituality that inhabits all creation. Kerouac saw the world, and everything in it, as Holy. In his view, all experience was an opportunity to, as Wordsworth put it, “see into the life of things.” As Sal Paradise (Kerouac) and Dean Moriarty and all the other rogues, misfits and castaways of “On the Road” go tearing about the country in a "wild ecstasy", their adventures of reckless abandon really become inquiries into what are the real values, truths and myths of America. What they expose is phony and sad. What they discover, at times, even amidst their youthful hedonism, is an idealism and a spirituality that endures not because of modern America but in spite of it.

“The Catholic Church is a weird church,” Jack later wrote to his friend and muse Neal Cassady. “Much mysticism is sown broad spread from its ritual mysteries till it extends into the very lives of its constituents and parishioners.” It is impossible to overstate the influence of Catholicism on all of Kerouac’s work, save perhaps those books written during his Buddhist period in the mid-to-late 1950s. The influence is so obvious and so pervasive, in fact, that Kerouac became justifiably incensed when Ted Berrigan of the Paris Review asked during a 1968 interview, “How come you never write about Jesus?” Kerouac’s reply: “I’ve never written about Jesus? … You’re an insane phony …  All I write about is Jesus.”