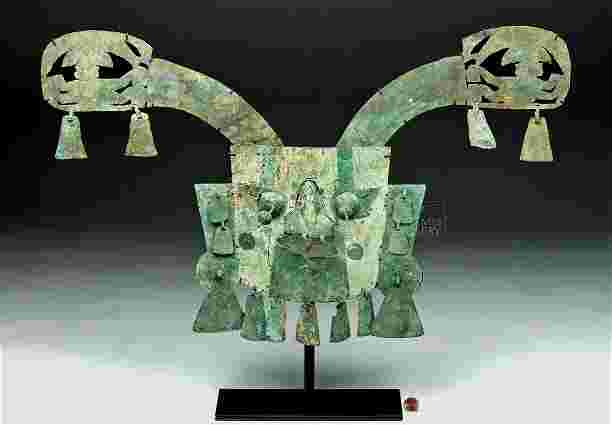 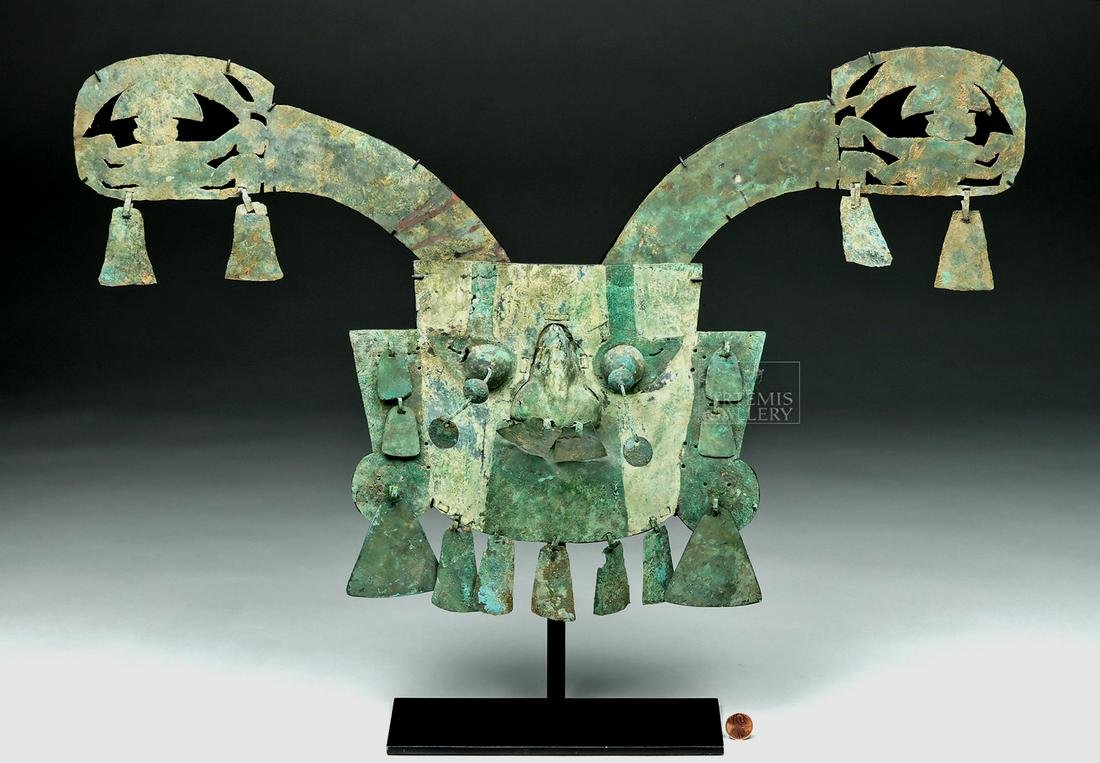 Pre-Columbian, north coast of Peru, Sican / Lambayeque culture, ca. 10th to 11th century CE. A beautiful mask made of hammered copper, with two huge copper projections that rise, similar to horns but actually representing wings, from the top of the head. Fifteen trapezoidal copper sheet danglers hang from the "wings" and face. The eyes are bulbous, applied half-spheres, each with a wire with two discs spaced out along them projecting outward from the center of the eyes, a look that has been variously interpreted as tears or a magical/enhanced ability to see. The nose is large and three-dimensional, with two pointed, flat projections arising from underneath it, probably replicating nose ornaments. There is no mouth. Similar examples have cinnabar pigment applied to them, and this piece may once have had that too. White pigment covers much of the face, leaving the area around the eyes and below the nose a green copper patina color. Size: 25" W x 15.5" H (63.5 cm x 39.4 cm); 18.7" H (47.5 cm) on included custom stand.

The "wings" widen at their terminals into openwork depictions of a lord with a curved headdress and either multiple arms or wings of his own. This is Naymlap, the traditional founder of the Lambayeque dynasty, who came from the south by sea and colonized the region before, it was said, sprouting wings and flying off into the sunset in a dramatic display of his magical powers. He seems to have been worshipped by his descendants, and silver and gold vessels, weapons, and jewelry are all adorned with his likeness.

This mask was made to adorn the body of a deceased elite member of the Sican society - gold and silver were reserved for royalty, and copper for the nobility. Sican elites were patrons of workshops that made fine metal objects like this one, and they took their wealth with them when they died. Buried in mounds, they would be entombed in high style. It is difficult to imagine just how much wealth each individual was buried with - for example, one of the few controlled excavations of a high status Sican tomb, archaeologists found 1.2 tons of grave goods inside of a 3 meter square shaft tomb that also contained a man, aged 40 to 50 alongside four sacrificial victims, two women and two children. This included vast quantities of gold, silver, and copper artifacts.

The copper surface was originally painted and later on covered in textiles to preserve it, with the remains of both pigment and adhesive visible in some areas. Small areas of corrosion, but overall in excellent condition, with a pretty, pale turquoise, mottled patina. "Wings" are not attached to the mask but appear to be contemporary to it.