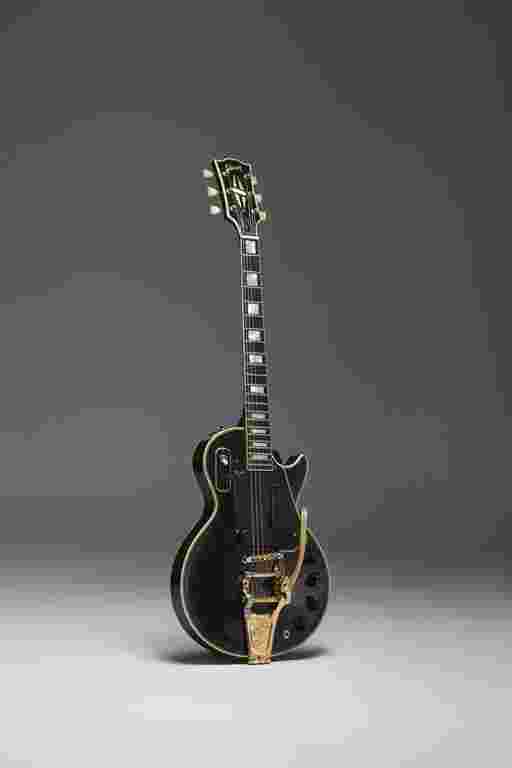 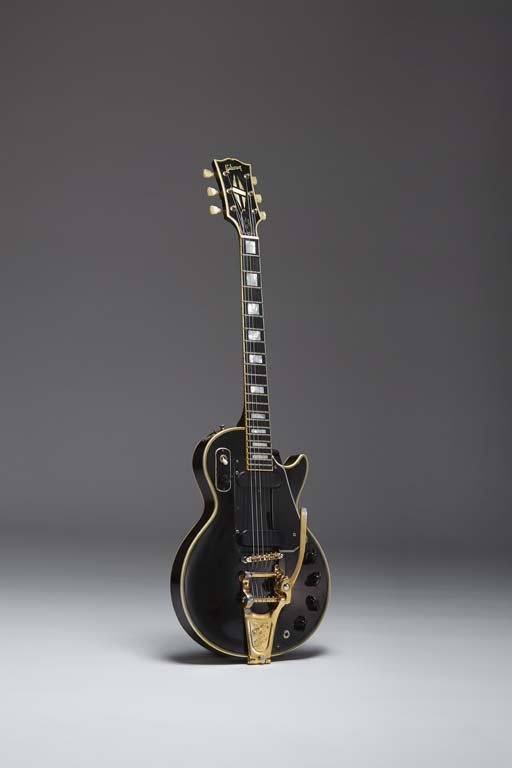 (Guitar Player Magazine has devoted a 16-page cover story to the Gibson Les Paul "Black Beauty" where it is described as "The Genesis of All Les Paul Guitars to Come!," and a wide array of other print and broadcast media have reported similarly (several hundred individual pieces of Worldwide Press). Nevertheless, recently there has been one reporter, to our knowledge, quoting some who contend that it is not as significant as reported in the article or described in the auction catalogue, but do agree that it is Les Paul’s personal guitar. The guitar is sold "as is" and Guernsey's makes no representations as to which group is correct. Any bidder proceeds at his/her own risk in this regard.)


Les Paul’s 1954 Black Solid Body Custom guitar - commonly referred to as “Black Beauty” - is probably the most widely recognizable symbol of a multi-platform career that spanned 80 years. Les himself was a pioneer and consummate innovator, and this remarkable piece of music history is a living testament to the instrumental role he played in the creation of the modern electric guitar. Considering its storied past, it should not come as a shock that luthier Tom Doyle dubs this historic instrument “the Mona Lisa of electric guitars;” even the Gibson Guitar Company places Paul’s work on par to that of Thomas Edison and Alexander Graham Bell within the realm of rock and roll.


There was never a doubt in Les’ mind that a quality solid body electric guitar could be and should be produced for the mass market. Prior to being approached by Gibson in 1952, Paul spent a decade tinkering with instruments already in his possession: he had ideas and always found a way to act upon them. Amongst Les’ innumerable fans was Gibson’s President and CEO Ted McCarty, and together McCarty knew that collaborative efforts with a talent such as Les’ would allow them both to change the sound of American popular music. After the two attempts to build a solid body electric guitar (known as The Gold Top) resulted in multiple design flaws, Les demanded that a better quality instrument be made if it were to bear his name. Shortly after two ill-fated attempts to create a guitar as unique and dapper as the man it was named for, out of the Gibson factory came this 1954 Les Paul Black Custom.


The design of the guitar emulated that of a formal tuxedo, with its body draped entirely in black and embellished with impressive triple binding and gold hardware. This is the very first Les Paul guitar to feature the newly developed tune-o-matic bridge and stoptail piece system, finer inlays, and higher refinements, all of the issues with both the 1952 and 1953 Les Paul Gold Top models were resolved with this instrument. Though initially known as the 1954 Les Paul Black Custom, this marvel eventually came to be called “Black Beauty,” and it was more than just a well-used prototype: Black Beauty helped birth rock and roll and some of the genre’s most pivotal artists. All other Les Paul Models would now be based on this guitar’s design, features, and specs, and this instrument is the very genesis of every other Les Paul guitar that Gibson would ever make through modern day.

Many of today’s most accomplished musicians keep multiple Les Paul models in their arsenal and play them extensively, including Jimmy Page, Slash, Eric Clapton, Paul McCartney, Jeff Beck, Neil Young, Dave Grohl, Peter Frampton, Billy Gibbons, Joe Bonamassa, amongst others. Some of the most famous names in modern rock and blues history proudly played on their own Les Pauls, such as Gary Moore and the legendary Peter Green, and innumerable others. Indeed, hundreds of thousands of these fine instruments are used around the globe as the guitar of choice for serious players and performers. This seminal Les Paul Black Custom, named for the “Godfather of the Electric Guitar,” was the prototype from which all other Les Paul guitars were born.

By the 1950s, Les Paul and wife Mary Ford were on top of the world. Their hit program on NBC Radio, The Les Paul Show, was adored by the American public and the way Les showcased music, his inventions, and garnered fans with humorous banter between himself and his wife. By 1954 the famous couple transitioned their program to the newest entertainment medium – television – and the world caught a better glimpse of Black Beauty because of it. Sponsored by Listerine, The Les Paul & Mary Ford Show aired five times a day, five times a week for fifteen minutes, and Les played his Black Custom in every single episode. Realizing the appeal of filming the two stars in their actual house surrounded by Les’ futuristic devices, Listerine did the unthinkable and built a functioning television studio in Les’ home in Mahwah, New Jersey. From the moment Paul received Black Beauty he began tinkering with it, and it was not uncommon for viewers each week to tune in and see a modified version of the guitar based on the sound he desired at that time. According to longtime friend, luthier, and guitar technician Tom Doyle, Les even went as far as to modify his guitar during the show, since more than one song was performed each episode.


Also referred to at this time as his “recording guitar,” Black Beauty was used for many of Les Paul’s hit songs, such as “How High the Moon,” “Vaya con Dios,” and “I’m Sittin’ on Top of the World.” Even though he considered the 1954 Black Custom a success, Les famously continues to use this guitar for experiments for over twenty years. Whether it was a new song or an old chart-topper with an alternative arrangement, Paul constantly tinkered with this guitar so that whatever effect he desired was incorporated into the recording. Les constructed devices for himself because such machinery had not yet been invented for the mass market, and he made many of the modifications for himself both at home and on the road. The Master often changed the pickups and controls on this, his favorite guitar.


Given Les’ predilection for tinkering and experimentation, it should come as no surprise that he dropped off his famed guitar at Tom Doyle’s shop in Dumont, New Jersey with no hardware attached to its black body. Paul brought the Black Custom along with six or seven other guitars to Doyle’s shop so that each could be refurbished and restored to exacting specifications. Despite their years as friends and colleagues, Les was very demanding of Tom’s time and he sensed Tom was becoming somewhat vexed with whole arrangement. As a gesture of friendship and good faith, Les ultimately gifted Black Beauty to Tom as a physical reminder of just how much Les cared for him personally and professionally.

Black Beauty first hung in Tom Doyle’s shop essentially naked – the proverbial emperor awaiting its new clothes. A deal was brokered between the luthier and performer that resulted in Doyle restoring Paul’s D’Angelico archtop in exchange for all of the Black Custom’s hardware. Taking one step further, Les also threw in many of the experimental parts he created or tweaked throughout the years for good measure. In the mid-to-late ‘70s under the guidance of the great Les Paul, Tom Doyle methodically and accurately restored Black Beauty to its most-famous form.


Throughout its 22 years as Les’ primary instrument, the Black Custom existed in three major formats, all of which can be reprised today. Commonly referred to by Tom as iterations, they are best described by outlining which major pieces of hardware existed on the guitar during a given time. The first iteration – the closest to the original 1954 design straight from Gibson’s Kalamazoo, Michigan factory – included two air coils, two Les Paul pickups (hand-wound by Les and brother-in-law Wally Kamin), a combination pickguard-cavity plate designed to conceal the pickups, and a Kaufmann Vibrola stop tailpiece. At this point in time Les had made many of the modifications himself, a prime example being the addition of the tailpiece, which was not present when Gibson originally delivered the guitar.


The second iteration dates from the 1960s. Featuring a Bigsby tailpiece, hand-wound pickups with fabricated pickup covers, and a dot of superglue under the E string on the neck pickup that acted as its own separate fret, this version allowed for another namesake invention. Known as the Les Paulveriser, this device began as a work of fiction and source of comedy during his radio days with Mary Ford. It was the means in which Les justified to his audience the occurrence of a multilayered sound from his one guitar; once a reality and plugged in, however, the device allowed him to utilize pre-recorded layers from songs to recreate the trademark effects his studio recordings live on stage. It was with this iteration of the Black Custom that Paul ground down one side of the Bigsby tailpiece to make room for a Les Paulverizer without compromising the instrument’s playability.


The tertiary and final form of Black Beauty was the one most favored by Les Paul, and the manner in which Tom Doyle presents the guitar today. Choosing to transform his original prototype yet again, this third iteration was used in the early 1970s prior to Les having gifted it to Tom. Sporting the same partially ground-down Bigsby tailpiece, cosmetically this guitar features gold-plated brass surrounds in addition to Les Paul pickups with Gibson pickup covers.