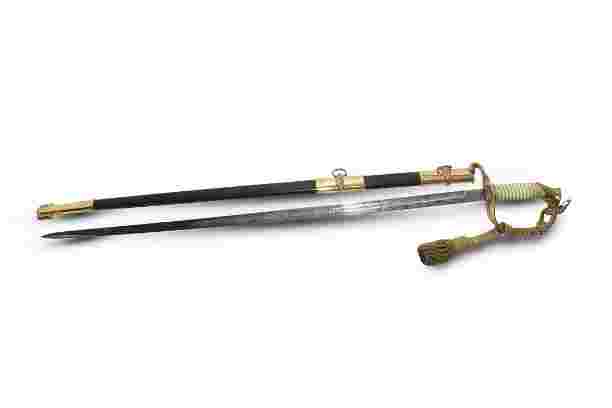 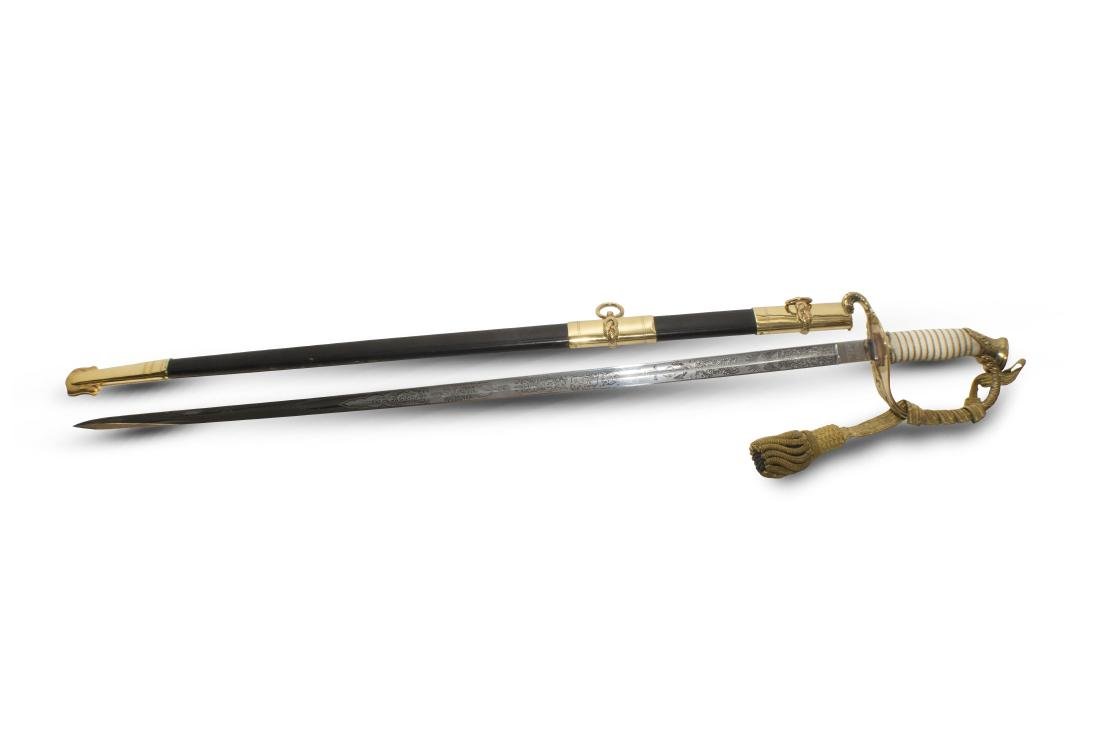 This sword was affixed to President Kennedy's catafalque, which was originally built as the stand to hold the casket of President Abraham Lincoln. The catafalque is a simple bier of rough pine boards nailed together and covered with black cloth.

The single-edged carbon steel blade of this sword is elaborately etched with decorative patterns. Directly below the grip, a six-pointed star and the word "Proved" are etched, a requirement for all U. S. military swords signifying that the blade meets the current military specifications. Etched on the verso, below the grip, are the name and logo of the company that made the sword, Hilborn-Hamberger Inc. New York, above which is incised the word "Germany." The white shark skin grip is bound with brass wire and the heavy brass handle is wrapped with an elaborate gold braid, from which hangs a braid-wrapped tassel, known as a sword knot. The sword's blade is encased in a protective black scabbard with elaborate brass fittings and tip.

The sword and scabbard are mounted on a shield-shaped wooden plaque. Affixed to the plaque is a medallion of the Great Seal mounted on a white ground and an inscribed brass plate which reads: "This sword, belonging to Lieutenant Henry E. Hirschy, Jr, Supply Corps, United States Navy, Supply Officer for the Naval Aides to the President, rested on the catafalque of the late President John F. Kennedy in the East Room of the White House, Washington D.C., during the thirty-day mourning period (24 November through 23 December 1963)."

Henry E. Hirschy, Jr was a Navy Lieutenant at the time of President Kennedy's assassination, working as Supply and Logistics Officer for the Military Aides to the President and Officer-in-Charge of the Navy Mess in the White House. His duties also included taking care of the President's needs on overseas trips, aboard the presidential yachts and at Camp David. Lt. Hirschy's daily responsibilities included making sure the Presidential Seal was placed wherever the President was slated to speak, making provisions for state dinners, and ensuring his horsehair mattress, alcoholic beverages, Cuban cigars from Dunhill in New York, his custom rocking and office chairs and other personal items were taken along on presidential trips. Lieutenant Hirschy served in the White House from May 1, 1961 through May 31, 1965 for both President Kennedy and President Lyndon B. Johnson.

Includes a framed photograph of showing the swords in place on President Kennedy's catafalque. The sword belonging to Lt. Hirschy is the one shown with the handle on the right.

Guernsey's is honored to be representing the Family of Lieutenant Henry E. Hirschy, Jr. in offering this historic artifact.

2,048 Followers
Get notifications from your favorite auctioneers.
As Seen On
Shop With Confidence
Since 2002, LiveAuctioneers has made exceptional items available for safe purchase in secure online auctions.
Popular Searches
Artists & Creators
Brands
Style Periods
Origins
Company
Winning
Selling
Â© 2002-2020 LiveAuctioneers. All Rights Reserved.Cookie PolicyTerms & ConditionsPrivacy Policy
This site is protected by reCAPTCHA and the Google Terms of Service and Privacy Policy apply.
BACK TO TOP