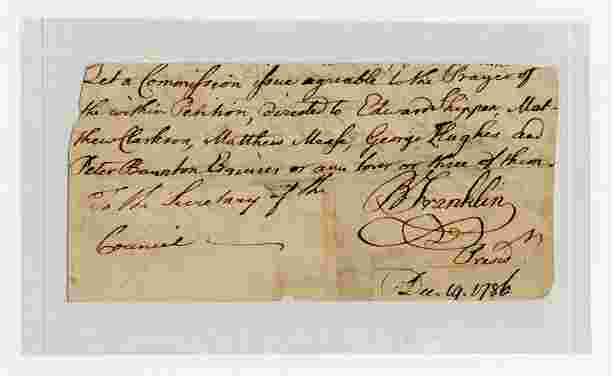 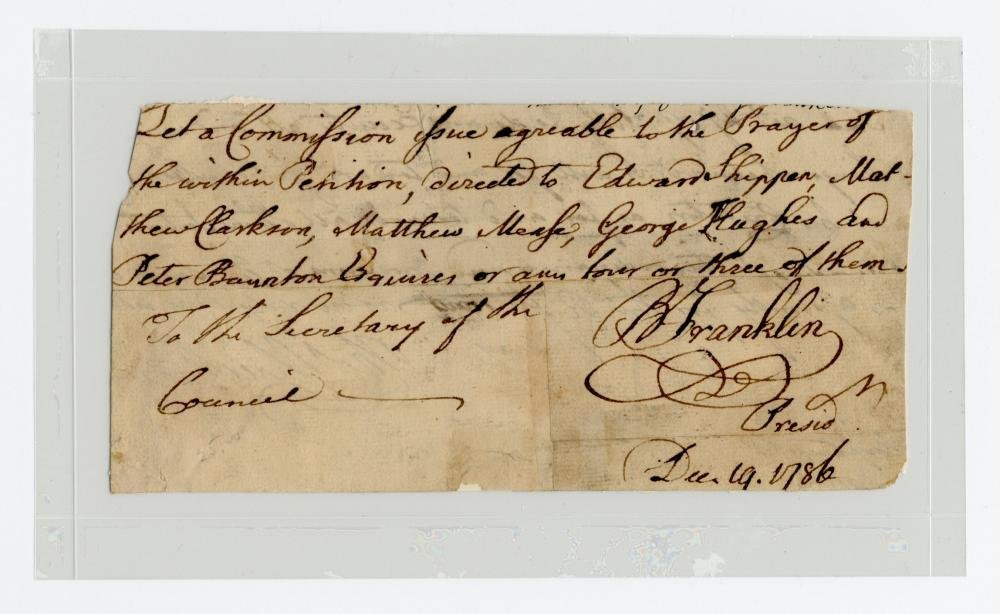 An outstanding autograph document signed by Benjamin Franklin in superb bold ink with a large signature. As part of larger document and shown below:

"Let a commission issue agreeable to the Prayer of the within… directed to Edward Shippen, Matthew Clarkson, Matthew Mease, George Hughes and Peter Baynton Equires or am four or three of them.

To the secretary of the Council,


In 1766, Franklin testified in the British Parliament against the Stamp Act of 1765, which required that all legal documents, newspapers, books, playing cards and other printed materials in the American colonies carry a tax stamp. Although the Stamp Act was repealed in 1766, additional regulatory measures followed, leading to ever-increasing anti-British sentiment and eventual armed uprising in the American colonies.

Franklin returned to Philadelphia in May 1775, shortly after the Revolutionary War (1775-83) had begun, and was selected to serve as a delegate to the Second Continental Congress, America's governing body at the time. In 1776, he was part of the five-member committee that helped draft the Declaration of Independence, in which the 13 American colonies declared their freedom from British rule. That same year, Congress sent Franklin to France to enlist that nation's help with the Revolutionary War. In February 1778, the French signed a military alliance with America and went on to provide soldiers, supplies and money that proved critical to America's victory in the war. As minister to France starting in 1778, Franklin helped negotiate and draft the 1783 Treaty of Paris that ended the Revolutionary War.

In addition to being a revolutionary and founding father, Franklin was known as the man who harnessed lightening. Franklin's scientific curiosity and observations led him to invent the lightning rod, the Franklin stove for more efficient heating, and bifocals. Over the years his study, curiosity and observation led him to chart the dimensions of the Gulf Stream, to demonstrate that acid soil could be improved by adding lime, that fresh air was important for good health (which he debated with John Adams one famous night when they slept in the same room), to recommend daylight saving time to conserve candle power, to advocate the benefits of citrus fruits (Vitamin C) for seamen, and to invent the Glass armonica, so that music could be played using glass saucers of different sizes. Mozart and Beethoven both composed music for the Armonica. The famous English statesman William Pitt maintained that Franklin ranked with Sir Isaac Newton as a scientist and inventor.