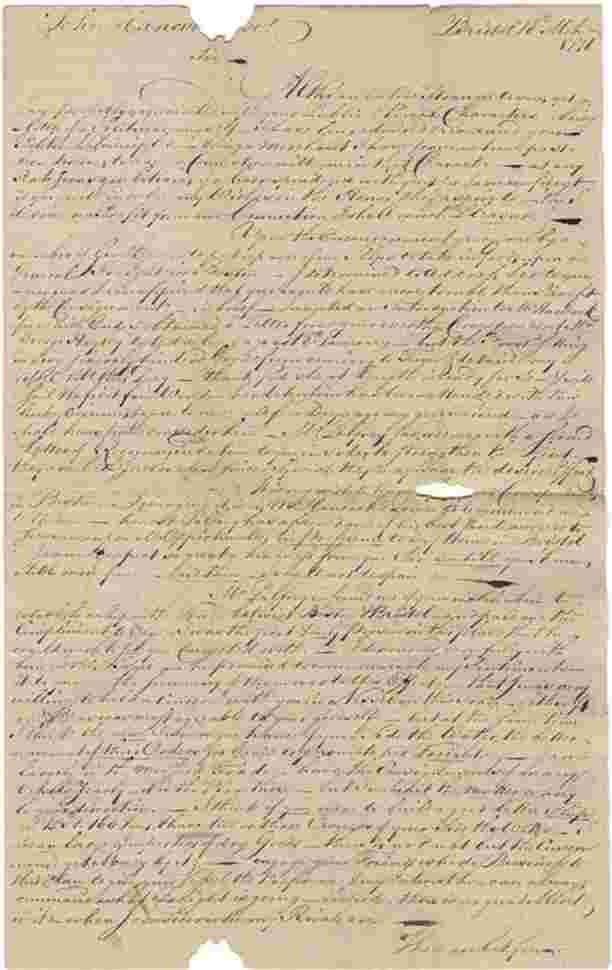 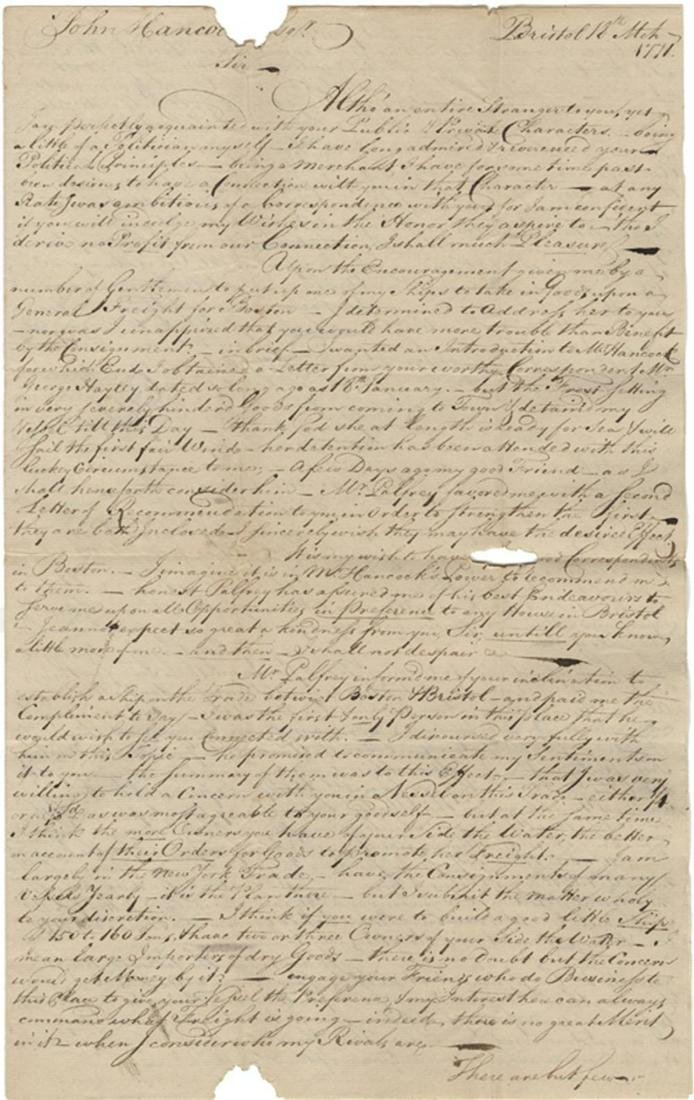 Bristol merchant Henry Cruger writes to John Hancock: "Being a merchant, I have for some time past been desirous to have a connection with you in that character". Hancock docketed the verso in his own hand. In 1776, Hancock was one of the signers of the Declaration of Independence.

An interesting letter from Bristol merchant Henry Cruger to John Hancock concerning the possibility of a joint commercial venture. Hancock docketed it on the verso: "Henry Cruger Esq. from Bristol Rec'd May 9th 1771 By Capt Gough".


"... being a merchant, I have for some time past been desirous to have a connection with you in that character. At any Rate, I was ambitious of a Correspondence with you ... upon the encouragement given me by a number of gentlemen to put up one of my ships to take in good upon a General Freight for Boston - I determined to address her to you... Mr. Palfrey inform'd me of your inclination to establish a Ship on the Trade betwixt Boston & Bristol - and paid me the compliment to say I was the first & only person in the place that he would wish to see you connected with... very willing to hold a concern with you in a Vessel on this trade - either 1/4 or a 1/3d as was most agreable [sic] to your good self - but at the same time I think the more owners you have of your side of the water, the better on account of their orders for goods to promote her Freight. I am largely in the New York Trade - have the consignments of many vessels yearly... I submit the matter wholy [sic] to your discretion - I think if you were to build a good little ship of 150 to 160 tons, & have two or three owners of your side the water - I mean large importers of dry Goods - there is no doubt but the concern would get money by it. Engage your Friends who do business to this place to give your vessel the preference & my interest here can always command what freight is going... there are but few [articles sent] from your country to this... sixty or eighty tons of oil by a vessel goes off very well and so will 15 or 20 tons of pot ash. Dye wools of all sorts will sell in any quantity... lumber we abound in... NB spermacati oil is always L3 or L4 a ton lower in summer than winter... inclosed [sic] I beg leave to trouble you with three bills of Lading... I would not trouble you in this matter but as it may tend to promote the freight of a vessel of your own should you one day or other have one in trade... I have taken the liberty to trouble you with the consignment... should be glad to have my ship returned to Bristol directly if you can procure a Freight... [we] are quite overstocked with that kind of American lumber & it is become exceedingly cheap and very difficult to dispose of... Hen: Cruger Jr."

British trade with the colonies was usually carried on in American-built ships. When ships themselves were the commodity, they were generally built in New England, loaded at a southern port, and then sent to their final destination in England. The two biggest colonial ports before the Revolution were Boston and Philadelphia; each controlled an extended peripheral region. New York controlled the business in that area, including western Connecticut and east New Jersey; Newport controlled Rhode Island; Charleston controlled South Carolina, North Carolina and Georgia. Commerce involved barter, specie transactions, and bills of exchange; credit, however, was the most used form of exchange. The commercial relations of the colonies were greatly restricted by English laws; the colonists often circumvented these laws and carried on business to their best advantage. When England finally decided to enforce the restrictions, the colonists quickly grew angry and resented their loss of autonomy. The letter is in very good condition, with a few holes and tears. The ink, however, is quite dark and the content legible.