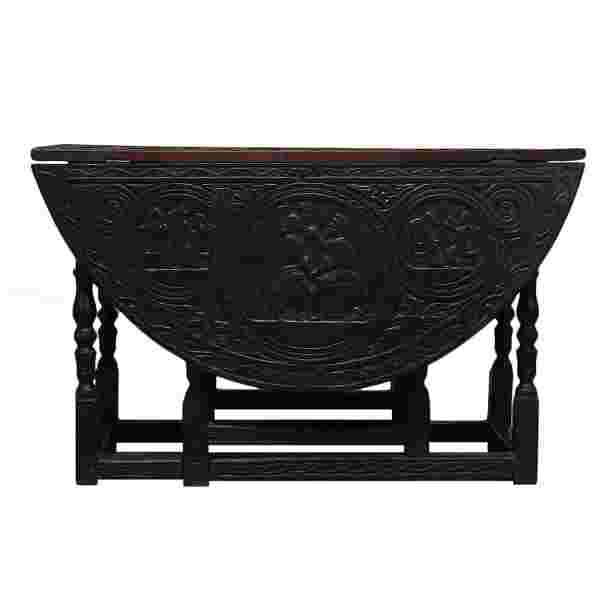 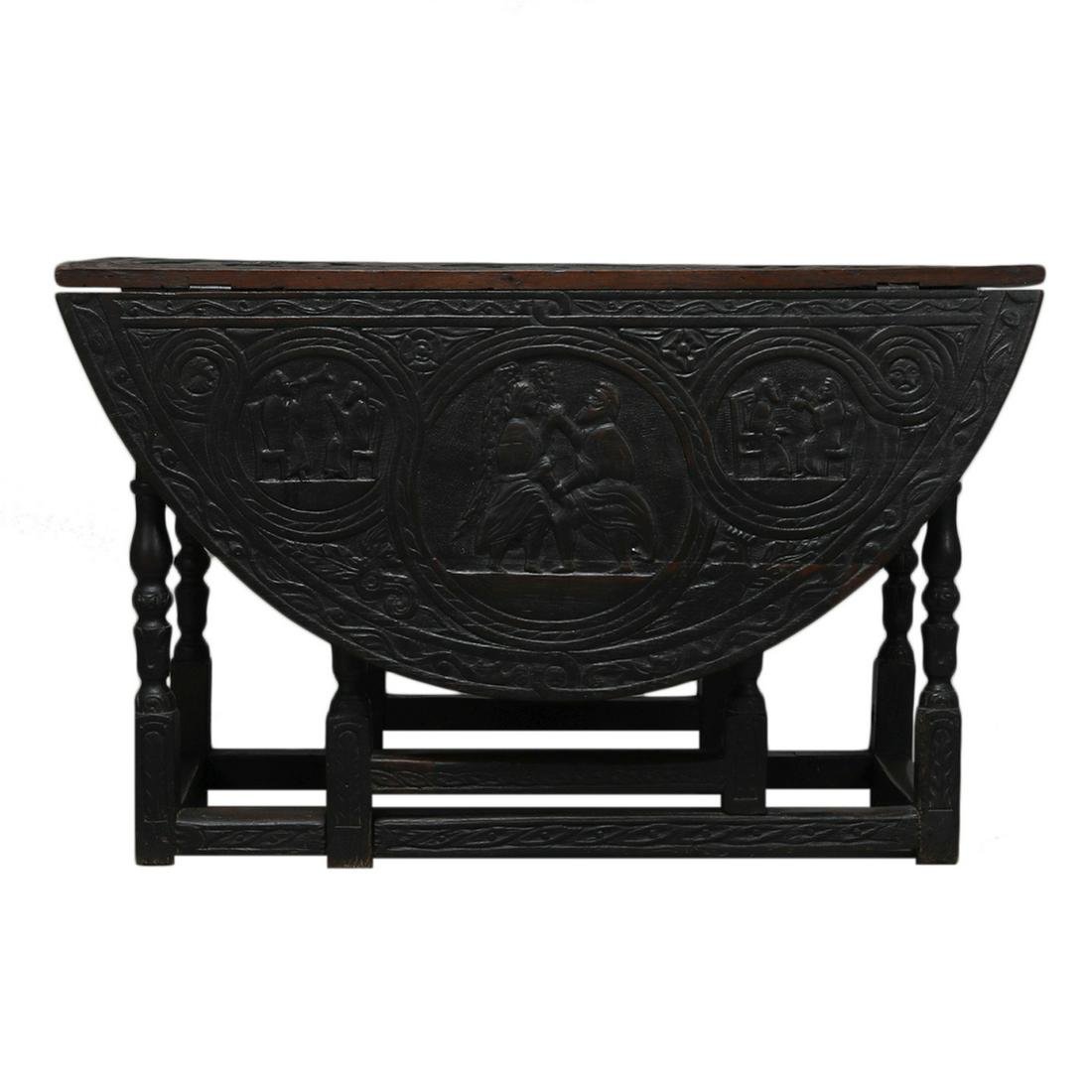 Antique Deeply Carved English Jacobean Drop Leaf Table Originally from Glastonbury Abbey, England offers Reserves of Figural Biblical Scenes on leaves and top. Exceptional patina for 1600's table. 17th c
Measures - 30.5" h x 50" w x 20" d closed, 57" oval, 28" seat clearance
***IN-HOUSE SHIPPING & DELIVERY QUICK QUOTES AVAILABLE UPON REQUEST***Additional Information:The Saxons, who had been converted to Christianity, conquered the ancient county of Somerset in the 7th Century. Their King was Ine of Wessex, who was widely regarded as one of the most important figures in the history of the abbey. He was a local man who boosted the status and income of the abbey, and it is said that he put up a stone church, the base of which forms the west end of the nave.This church was enlarged in the 10th century by the Abbot of Glastonbury, St. Dunstan, who became the Archbishop of Canterbury in 960.In 1066, the wealth of the abbey could not cushion the Saxon monks from the disruption caused by the foreign invasion and subsequent conquest of England by the Normans.Skilled Norman craftspeople contributed much to the abbey by adding magnificent buildings to the existing Saxon Church. These were built to the east of the older church and away from the ancient cemetery.The Norman betterment of the abbey was extensive. In 1086, when the Domesday Book was commissioned to provide records and a census of life in England, Glastonbury Abbey was the richest monastery in the country.The great Norman structures were consumed by fire in 1184 when many of the ancient treasures were destroyed. One story goes, that in order to raise extra funds from pilgrims to rebuild the abbey the monks, in 1191, dug to find King Arthur and his Queen Guinevere; and bones from two bodies were raised from a deep grave in, the cemetery on the south side of the Lady Chapel. These bones were reburied, much later, in 1278 within the Abbey Church, in a black marble tomb, in the presence of King Edward I.When the monastic buildings were destroyed in the fire of 1184, the medieval monks needed to find a new place to worship. There is evidence that the 12th century nave was renovated and used for this purpose for almost 30 years, until some of the work was completed on the new church. The monks reconsecrated the Great Church and began services there on Christmas Day, 1213, most likely before it was entirely completed.In the 14th century, as the head of the second wealthiest abbey in Britain (behind Westminster Abbey), the Abbot of Glastonbury lived in considerable splendour and wielded tremendous power. The main surviving example of this power and wealth is to be found in the Abbot's Kitchen - part of the magnificent Abbot's house begun by John de Breynton (1334-42).Privileged pilgrims might once have stayed in the abbey itself; excavations have disclosed a special apartment at the south end of the Abbot's house, erected for a visit from the English King, Henry VII. (glastonburyabbey.com)